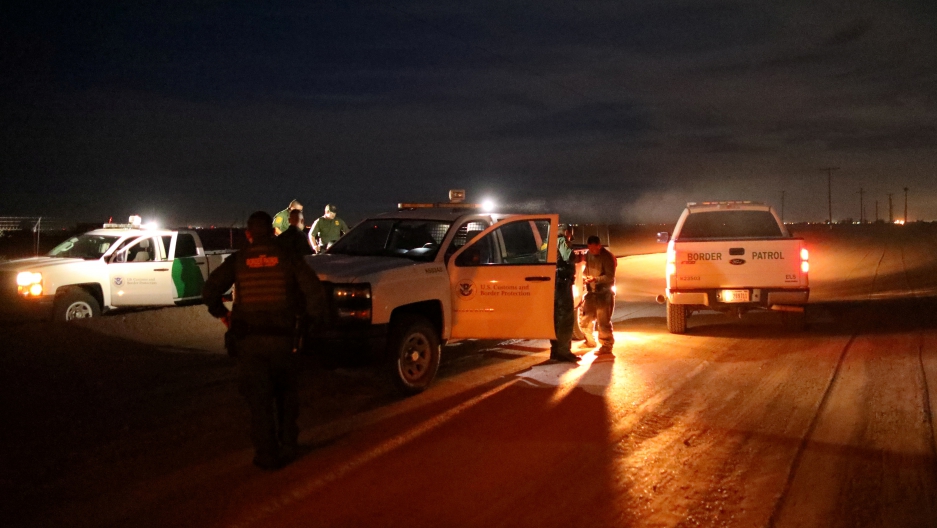 US border patrol agents detain a man after he was spotted crossing illegally into the United States along the Mexican border near Calexico, California, on Feb. 8, 2017. Juan Manuel Montes is suing the government for information; he says border officers in Calexico deported him on Feb. 17 though he has protected status as an undocumented immigrant brought to the US as a child.

These are sleepless nights and worry-filled days for many undocumented immigrants brought to the US as children.

"Every single day, when I leave my home I pray to God that I'm going to come back home to see my mother," says Martha Zavala Perez, an immigrant with DACA status living in Oxnard, California. DACA is short for Deferred Action for Childhood Arrivals, a 2012 Obama administration executive order that offered temporary protection and work permits to immigrants who arrived in the US as children.

Beneficiaries of the program have been on edge since 23-year-old California resident Juan Manuel Montes — who thought he had DACA protection — was deported to his native Mexico in February.

"Now, I can't help but look over my shoulder. That is the new normal, to constantly be aware," Zavala Perez says. "I'm constantly checking my wallet to make sure I have my DACA permit with me because nothing makes me feel safe at this point."

Attorneys for Montes say border agents apprehended their client and walked him across the border two months ago without an explanation. Montes was reportedly heading to a taxi stand in Calexico, California, when he was approached by an agent on a bicycle who asked him for identification. Montes had left his wallet in a friend's car and was unable to prove his DACA status. Hours later officials deposited him in Mexico where he's now living with relatives.

The Department of Homeland Security at first claimed that Montes' DACA status had expired in 2015, but admitted on Wednesday that Montes did indeed have protected DACA status until 2018. But DHS argued the status became invalid when Montes tried to re-enter the country illegally two days after his deportation. His attorneys countered that their client would never have been crossing the border if he hadn't been wrongly deported in the first place. They are suing for information about Montes' case.

Zavala Perez isn't surprised by what happened to the so-called "Dreamer," the term used by supporters of undocumented immigrants brought to the US as children.

"The immigrant community, we know how border patrol works. They funnel people through. They ignore due process," she says. "I knew it was going to happen, it was just a matter of time."

Some media reports suggest Montes is the first deported Dreamer. He's not, strictly speaking. The Obama administration also expelled several hundred DACA recipients who were convicted of a "significant misdemeanor" or had three misdemeanors. Montes was convicted for shoplifting in 2016, which did not disqualify him from DACA. Since President Donald Trump took office, several other DACA recipients have been detained but not deported, including Daniel Ramirez Medina in Washington and Josue Romero in Texas.

Trump has not stated what his policy will be toward people with deferred deportation status, such as DACA recipients. On the campaign trail in 2016, he vowed to do away with the DACA program. Any undocumented immigrant charged with a crime would become eligible for removal. But at a press conference in January, Trump hinted that he might be considering a compromise.

"We're going to show great heart. DACA is a very, very difficult subject for me," he told reporters. "I love these kids. I love kids. I have kids and grandkids ... And I find it very, very hard doing what the law says exactly to do, and, you know, the law is rough."

Ask the president: What are you going to do with DAPA and DACA?

Zavala Perez was born in Mexico and found out she was undocumented in high school, when she applied to community college. She doesn't expect the Trump administration to continue to provide DACA protections, but she vowed to fight his policies publicly after she was invited to attend Trump's address to Congress at the end of February.

"In the case of Juan Manuel Montes, why were his attorneys not notified?" she asks. "Why didn't he have his day in court?"

US Judge Gonzalo Curiel has now been assigned to hear the Montes case. Trump criticized Curiel last year over his handling of a lawsuit against Trump University, and argued that the judge could not impartially hear the case because of his Mexican heritage. Curiel was born in Indiana.