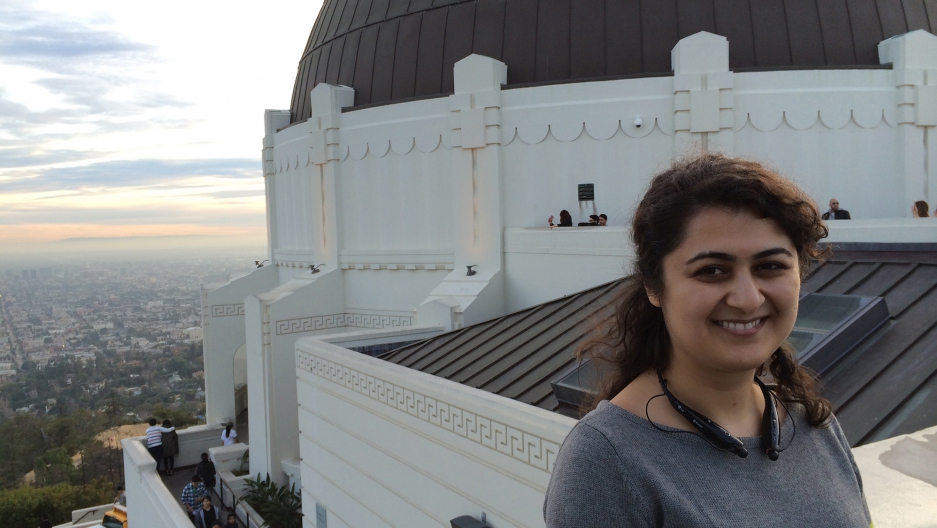 When Sona Hosseini went on a class trip to the planetarium, she fell in love with the stars.

This is a story about what happens when you finally get to touch the light you’ve longed for your whole life.

Sona Hosseini passes through the doors of Griffith Observatory in Los Angeles. She exits the stairwell, and stands beside a dome that holds one of the observatory’s telescopes.

“It feels like home,” she says. And not just here — she’s at home anywhere associated with outer space.

“It’s been a long friendship between me and astronomy,” Hosseini admits.

It goes back to Texas, when she was in the first grade and went on a class trip to NASA’s Space Center in Houston.

“They gave us a tour,” she says, “and then suddenly they took us to the planetarium.”

The planetarium show was unlike anything Hosseini had ever seen. Entire worlds danced before her eyes.

“This lady told us, ‘Hold tight, we are going to the moon. And we are going to the Sun.’ And the entire scene would change and we would zoom into a planet and hop from one planet to the other planet,” Hosseini says. “And I was so furious when my classmates were talking and not paying attention. I was like, ‘Hey, shut up, I’m listening!’”

Something powerful was welling up inside Hosseini.

“I was touched beyond my own understanding of how deep I could be touched,” she says.

“And I remember crying — I didn’t want to leave the center. I was asking the lady, ‘How can I work here?’ The lady told me, ‘Oh, honey, you should have a PhD.’ I didn’t know what a PhD was. My best choice was to go home and tell my mom I need a PhD, we’ll go and buy it, and next day I’ll be back there.”

She couldn’t buy her daughter the degree. But she could buy her other things.

“My pillows, my blanket, my posters on the wall — everything was nice pictures of the planets,” Hosseini says.

At school, she made every project in every class about outer space. Mohandesi says Hosseini just couldn’t take her eyes off the sky. “Always she looked at [the] sky. Always. When we go shopping, she never look at the clothes, makeup, nothing. She just look at the sky. ‘Mom, I want go there.’”

But first, Hosseini went to Iran. Her parents are Iranian and they wanted their children to grow up in Iranian culture. So in 1992, at the age of 11, Hosseini and her family returned to the city of Zanjan. The move took her 7,300 miles across Earth. But it put the stars beyond her reach.

“There were no astronomy-themed pillowcases in Iran,” Hosseini says.

There were no planetariums in Zanjan. And her mom says none of Hosseini’s schoolteachers could foster her particular streak of curiosity. All her questions about outer space were going unanswered.

“And I was made fun of,” Hosseini says. “I would come home crying every day.”

So Hosseini’s parents tracked down one of the best basic science universities in all of Iran, which happened to be in Zanjan, and they met with the director, who happened to be a cosmologist.

“And he told my mom, ‘Well, OK, Sona can hang out here after school.’ And that’s what I did,” Hosseini says.

Most days after lunch, she went to the university. She was about 12 at the time.

“It was huge because all my friends were PhD students and cosmologists,” she says. “I would jump in and ask any question that I want. And I never learned how to be shy in science.”

Hosseini went to college in Iran and did her master’s there too. Then she returned to the US — to the University of California, Davis — for that thing she had wanted since she was 7 years old: her PhD in engineering applied science. She worked on designing and building an instrument to examine the light pouring off of big targets in space like comets and planetary atmospheres — all to figure out what they’re made of. The closest facility where she could do her work was on top of a mountain. The place was isolated, and Hosseini worked the night shift.

“I do not remember sun,” she says.

She rarely saw another soul. All she did was work. And gradually, she slipped into depression.

“It was a very dark time for me — very unhealthy,” Hosseini says.

Night after night, as she worked on her instrument, the irony of her situation just deepened her sadness.

“I was building an instrument to gather light and here I was in darkness,” Hosseini says.

She had finally arrived at the place she had wanted to be for so long. And it was so very sad for her.

“My dream was to be in an observatory,” Hosseini says. “That was my dream growing up. And it was so sad. I drowned myself, putting all these expectations on myself, it almost suffocated me.”

Her mom tried to break her out of it.

“I told to her, ‘Sona, listen to this music. Sona, do you want to make that food?’ I did everything I knew. I told her, ‘Go [to] some restaurant and dance.’ She loved dance,” Mohandesi says.

Hosseini remembers her mom saying to her, “You have to start taking these things as a pill. You have to go down the mountain [to] meet your friend twice a week.”

It took her about two years to recover.

It was as though she had finally touched the stars, but when she looked around, she was alone. And it was the things of the Earth — the dance, the human contact — that restored her.

“I learned that the stars were beautiful in company with other things that I was doing,” Hosseini says.

It was the mountain and her family that taught Hosseini a lasting lesson about the universe. That sometimes the stars glow their brightest when you’re right here on Earth.

This story comes to us from a live show called “Stories Under the Stars.” It was co-produced by Ari Daniel and the Charles Hayden Planetarium at the Museum of Science in Boston.