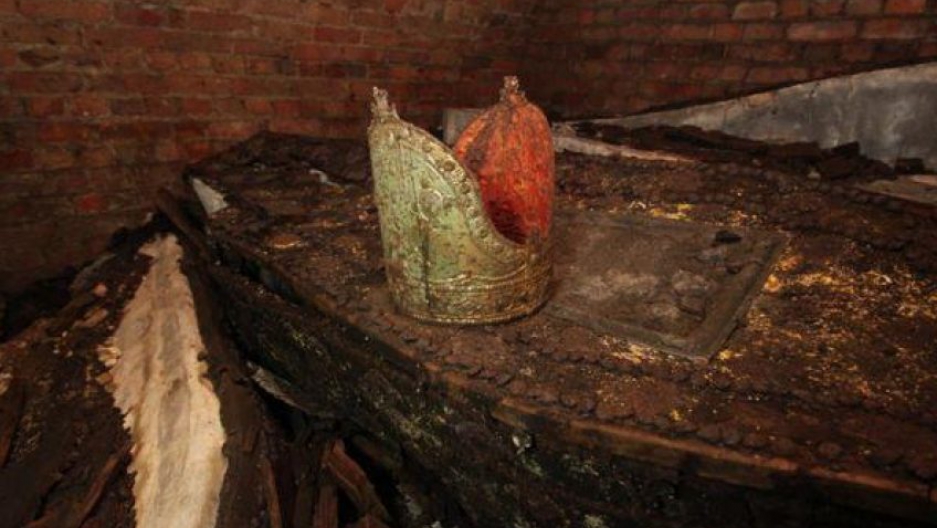 A forgotten crypt has been uncovered in an ancient church in London. Inside are the remains of some of England’s most influential churchmen. They will remain undisturbed for now — apparently being sealed in a lead coffin can have explosive consequences.

“It was incredibly exciting,” says journalist Harry Mount, of Britain’s Daily Telegraph, who was the first outsider to be allowed to see inside the underground vault. “There’s a tiny little hole leading down to a crypt beneath the altar ... and there were 30 lead coffins tumbled all over, on top of each other.”

“And on top of one of them,” Mount adds, “there’s an archbishop’s miter or crown, gleaming gold and red.”

“It’s in incredible shape,” Mount says. “It’s since been discovered that it’s a 17th century miter, belonging to a 17th century archbishop of Canterbury, who would have been the head of the church back in the days when America was part of Britain.”

“No one knew they were there,” Mount says. “So it’s a really staggering find.”

The tomb was accidentally uncovered by workmen refurbishing the Garden Museum in a neighborhood of London. The Garden Museum is located in the deconsecrated St. Mary-at-Lambeth Church, which dates back to 1062 — making it a mere 955 years old. Oh, Europe!

The Garden Museum posted the following video about the discovery.

"It was a very interesting day actually," Karl Patten, the church renovation site manager, recalls in the museum's video. "We were exposing the ground as part of the job, and we were lifting the slabs in the arc area, and we uncovered an entry to what looked like a tomb. We got a camera on the end of a stick and we discovered numerous coffins and one of them had a gold crown on top of it."

The tomb itself appears to be only maybe 400 or 500 years old. At least five of the 30 coffins contain the remains of former archbishops of Canterbury — the most senior clergyman in the Episcopal Church of England. The official residence of the archbishop of Canterbury has been in Lambeth Palace, right next door to St. Mary’s, since the 1300s.

Some of the clergymen have been identified by gilt plates affixed to the coffins. They include Richard Bancroft, who was England’s No. 1 churchman from 1604 to 1610. He played a major role in producing the King James Bible, the official translation that remains in use with some conservative episcopal churches and is popular with many evangelical Christians. Scholars believe it had a more profound impact on the English language than Shakespeare, who was writing at the same time.

“It has a wonderfully beautiful harmonious sound to it,” says the Daily Telegraph's Mount.

It’s the source of countless idioms in English, like: "give up the ghost," "salt of the earth," "no rest for the wicked," "feet of clay," "the blind leading the blind," and "the quick and the dead."

It’s also the most widely printed book in history. Bancroft did not get any royalties.

As a journalist, Mount was curious to have a look inside the coffins himself, but was not allowed. Besides the structural risk of the ancient vault collapsing, there was another more ghoulish deterrent.

Apparently, sealed lead coffins are especially prone to this sort of thing, and the contents can burst out violently when the seal is broken.

“So if I’d gone straight in there and rapped on the coffins, I might have been covered in liquefied archbishop,” he says.