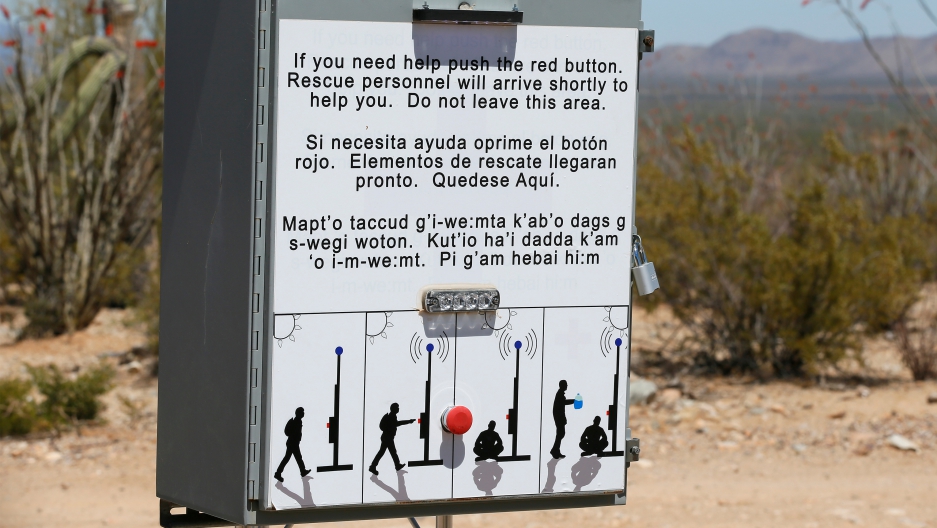 A sign written in English, Spanish and O'odham is seen at a rescue station near the US-Mexico border on the Tohono O'odham reservation in Chukut Kuk, Arizona on April 6, 2017. Attorney General Jeff Sessions visited the border on April 11, and said he is going to prosecute more people for immigration-related crimes.

#86 @realDonaldTrump, do you plan to prosecute those who give aid or shelter to undocumented immigrants? #100Days100Qs

Federal prosecutors have been directed to bring more cases and more serious felony charges against immigrants — and against those involved in immigration-related crimes.

Attorney General Jeff Sessions, in remarks to Customs and Border Protection agents in Arizona recently, said he is requiring federal prosecutors to consider cases involving "the transportation or harboring of aliens." He wants to target "people smuggling gang members across the border, helping convicted criminals re-enter this country and preying on those who don’t know how dangerous the journey can be." In a related memo to federal prosecutors (PDF), he explained further that the highest priority for prosecution should be given to "those who are transporting or harboring three or more aliens." ("Alien" is a legal term for anyone who is not a citizen of the US.)

While his remarks were made in the context of dangers from drug cartels and criminal organizations on the border, advocates of civil and immigrant rights are concerned that the language of the memo is much too broad.

Asian Americans Advancing Justice said in a statement that the policy "appears to be aimed at humanitarian workers and other 'good Samaritans' to deter them from assisting undocumented immigrants in any way, such as taking someone to the hospital or treating someone in an emergency situation." The National Immigrant Justice Center said adding to the prosecutorial load is misguided: "More than half of all federal prosecutions brought by the U.S. Attorney's Office already are immigration-related. Meanwhile, the overwhelmed immigration court system faces a backlog of more than 500,000 cases," they said in a statement.

Sessions' memo isn't the only effort to increase punishments for immigration-related crimes. Martha McSally represents Arizona's 2nd district, which sits on the southern border in the eastern part of the state. She introduced a bill in the House on April 6 that would increase penalties for "the intentional hindering of immigration, border, and customs controls." That bill has been referred to committee.

McSally told us via Twitter that the bill is not intended to target people who challenge immigration enforcement, but about drug cartels that threaten border agents. "Actually, it takes aim at drug cartels undermining border patrol agents," she wrote. We reached out to McSally's offices in Washington and Arizona for further comment and they sent a statement that the bill is meant to target "spotters," people who inform drug cartels about border patrol activities.

"During multiple trips to the border, I’ve seen firsthand where these scouts operate and heard frustrations from ranchers and Border Patrol about the lack of consequences they face,” McSally said in the statement.

Sessions, in his remarks in Arizona, emphasized support for border agents. "This is a new era. This is the Trump era,” he said.

Our question for the White House is one that seeks clarity: Does the "Trump era" include criminal prosecutions of people who give aid or shelter to undocumented immigrants? Click here to tweet this question to the president. Here are some other immigration-related questions we've asked.

#68. @realDonaldTrump, is immigration reform on your legislative agenda? #100Days100Qs