"Dearest Marlene: I always love you and admire you and I have all sorts of mixed up feelings about you […]  please know that I love you always and forget you sometimes as I forget my heart beats. But it beats always.”

The letter was addressed to Marlene Dietrich and written by Ernest Hemingway, one of many he sent to her over their 30 years of friendship.

It’s signed “Love, Mister Papa” and was written on Aug. 12, 1952 — a couple of months after Hemingway finished writing "The Old Man and the Sea." It goes up for auction next month. 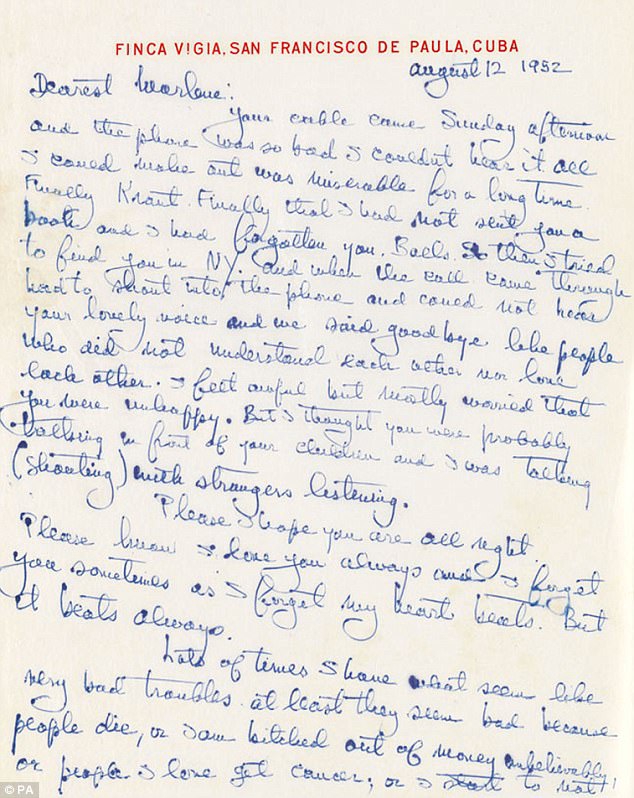 This is Ernest Hemingway's letter to Marlene Dietrich, in which he says, "I always love you and admire you."

The novelist and the femme fatale met on a French passenger liner in 1934. Hemingway was returning from an African safari with his second wife. Dietrich was traveling back to Hollywood after visiting relatives in Nazi Germany on one of her last trips home.

“Marlene Dietrich told the story later of how they actually met,” says Sandra Spanier, the editor of the "Letters of Ernest Hemingway." “[Dietrich] came into the dining room of the ship, and asked to join a group of people. And when they stood up, she realized there were 12 people at the table and she would make 13. And so she started to excuse herself. That’s when Ernest Hemingway appeared. He said he didn’t mean to intrude but he’d be glad to be the fourteenth person at the table.”

Dietrich and Hemingway went on to have an intense, flirty correspondence until the author killed himself in 1961, though they reputedly never slept together. Spanier describes their love as “platonic.”

“They claimed the timing was never right for the two of them to get together, but they were very intimate friends,” she says.

Spanier says they talked about their families, their work and their feelings about life and about each other. “They even had a fantasy scheme,” Spanier says, “that they would open a nightclub together one day. She would be the singer, and he would be the bouncer.”

Hemingway imagines the nightclub act in one of his racier letters to the actress, dated Aug. 28, 1955. 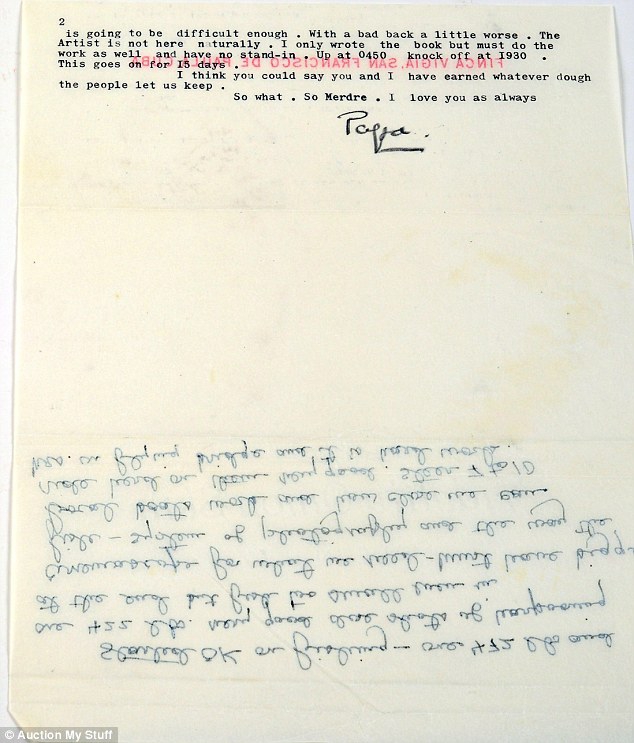 Courtesy of Auction My Stuff

"It would probably have something novel like having you shot onto the stage, drunk, from a self-propelled minnenwerfer [sic] [a German mortar launcher] which would advance in from the street rolling over the customers," wrote Hemingway.

"As you landed on the stage drunk and naked, I would advance from the rear, or your rear, wearing evening clothes and would hurriedly strip ... revealing the physique of Burt Lancaster."

Readers today might be surprised by how "un-Heminwayesque" the letters sound. The great American novelist is known for his spare narrative style. But his letters tend to be much “chattier,” says Spanier. “In his published work, he would polish and revise endlessly. He rewrote the ending of his novel 'A Farewell To Arms' 47 different times. In the letters, he would just dash off his thoughts spontaneously. So you do get that sense of immediacy in his letters, the chattiness, slang, humor.”

Spanier says there’s also an intensity of feeling in his letters that you don’t usually find elsewhere in his writing. “In his published work, there’s sort of this understatement, this grace under pressure, the tight-lipped feeling. And that’s not at all the way his letters read.”

On the contrary, Hemingway's letters to Dietrich are affectionate and playful. He signs his letters “Papa” and refers to her as “my little Kraut” or “daughter.” Spanier says Hemingway referred to most younger women that way.

Spanier believes Hemingway and Dietrich bonded over their experiences in World War II. Hemingway was a war correspondent and Dietrich entertained the troops in USO shows. “They both felt the war very intensely. And after the war, they had this feeling that they had been through something together and they were both tough people.”

For example, in a letter from June 27, 1950, Hemingway tells Dietrich: “We indestructibles should keep good contact. I am an old indestructible and you are a young one. But we know different from the others.”

He goes on to say, “Toi et moi have lived through about as bad times as there ever were. I don't mean just wars. Wars are Spinach. Life in general is the tough part. In war all you have to do is not worry and know how to read a map and co-ordinates.”

During the 1940s, Spanier says Dietrich and Hemingway would hang out at the Ritz hotel in Paris, after Hemingway had famously “liberated” the bar with the Allied troops. Once, at the Ritz, Hemingway gave Dietrich a poem he had written about death. “During the war,” Spanier says, “[Hemingway] attached himself to an infantry unit where 67 men had died in a 24-hour period. He was heartbroken and wrote a long poem about that. And he asked Marlene Dietrich to read this poem in the Ritz bar and reportedly everyone had tears in their eyes including her.”

Spanier says Hemingway and Dietrich’s relationship made perfect sense, in a way. “They were both strong personalities. They both had to contend with their own celebrity and carve out a private space. And I think they saw that in each other and respected that in each other.”

Dietrich’s daughter, Maria Riva, goes a step farther. In her biography, Riva writes, ''For my mother, Hemingway was the dashing War Correspondent in the turned-up-collar raincoat; the Hunter, shotgun cocked, standing strong in the path of a charging rhino; the Lonely Philosopher of the bleeding hands clutching his fishing line. … Whoever he visualized himself being, she accepted and believed in,'' she continues. ''She, the infatuated fan to all his fantasies, adored him and was convinced that she was the best friend he ever had. He adored her for being intelligent as well as beautiful, basked in her effusive adulation with shy pride.''

The Aug. 12, 1952 letter will be auctioned at Swann Auction Galleries' autographs sale in New York on May 4.

For an amusing profile of Ernest Hemingway including a description of a nightcap with Marlene Dietrich, read this article from the May 13, 1950 issue of The New Yorker: "How Do You LIke It Now, Gentlemen?"