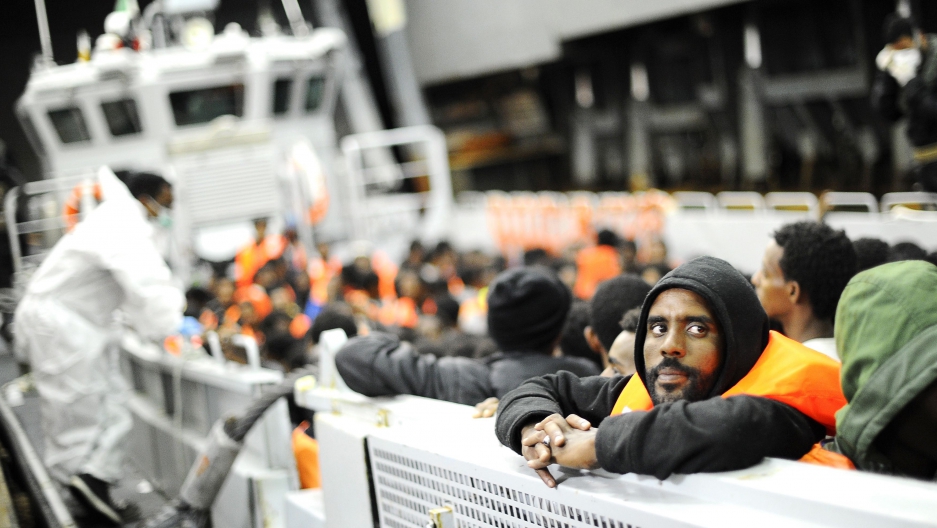 Migrants from Sub-Saharian areas stand on a landing craft of Italy's Navy ship San Giorgio after being rescued in open international waters in the Mediterranean Sea between the Italian and the Libyan coasts May 14, 2014. Italy's navy ship San Giorgio is one of five vessels involved in search-and-rescue operations in the Mediterranean Sea south of Sicily — known as Mare Nostrum or "Our Sea" — to prevent shipwrecks of overcrowded migrant boats like the one in October in which 366 drowned a mile from the island of Lampedusa. This picture was taken on May 14, 2014.

Four years ago, a group of Italian friends went out for an evening of sailing and found themselves at the heart of a humanitarian disaster of epic proportions.

Optician Carmine Menna, his wife Rosario, and six of their friends were sleeping after a night of revelry at sea in a small yacht off the coast of Lampedusa in the early hours of Oct. 3, 2013, when they heard what sounded like seagulls fighting.

"They moved towards that terrible noise, and as they got closer, they saw black shapes in the water. The optician, at first, thought it was fish," BBC reporter Emma Jane Kirby told As It Happens host Carol Off.  "But then he saw that these fish had arms and legs and faces — and he realized that the sea was boiling with drowning people."

What happened next is documented in Kirby's book "The Optician of Lampedusa," a story based on the migrant crisis and Menna's real-life experience.

"The optician's first thought, he remembers — and it stuck with me when I spoke to him in that interview a couple of years ago when I first met him — he didn't say, 'I wonder what do I do? How do I save them?' He said, 'How do I save them all?'"

Of course, he couldn't.

More than 360 people died in the Lampedusa tragedy, one of the worst disasters in a migrant crisis that has seen thousands of people drown in the Mediterranean.

The boat of 500 Eritrean and Somali refugees had almost reached its destination when the engine failed and it began to take on water.

Because they could see the lights of the city, some of the migrants decided to light a sheet on fire and wave it to get the attention of the people on the shore. The boat caught aflame and capsized.

By the time Menna's group arrived on the scene, they'd been in the water for hours.

"They were exhausted. They'd drunk sea water. They'd drunk gasoline. They were covered in petrol and gasoline, which made them incredibly slippy to try and pull up," Kirby said.

The optician and his cohorts had to decide who to save and who to let drown.

"They made a deal with each other that they had to move towards the groups of people that they could see, rather than individuals, and pull as many people up as they could at once," she said.

"And the optician remembers the pull of that first young man that he pulled from the water. He still remembers the feel of that man's hand and his grasping it and feeling the bones of that young man's hand cracking against his. And suddenly for him, as he touched that young man, he realized that the migrants, the migration crisis, was real and it was something which now absolutely concerned him."

In the end, they were able to save 47 people, before search and rescue teams showed up and took over the rescue effort.

"They knew that the boat was out of control, that they too at any moment could have flipped over. But they had to save lives. They had to keep doing it. Because how can you turn your back when there are still hands waving? How do you choose which hand to take? They were in an impossible situation," Kirby said.

"And I think what haunts them all the most is that when the coast guard arrived, they gave them the order that they had to turn and go back to the port. Of course, there were other boats by then in the water with the search and rescue operation. But they could still see hands. They were still looking for people. They were forced to turn their backs and turn around."

When all was said and done, 155 people were pulled from the water.

The optician — who Kirby never names in his book — is still wracked with guilt over those he could not save.

This story was first published by CBC's As It Happens. To hear more, listen to Carol Off's full conversation with Emma Jane Kirby.