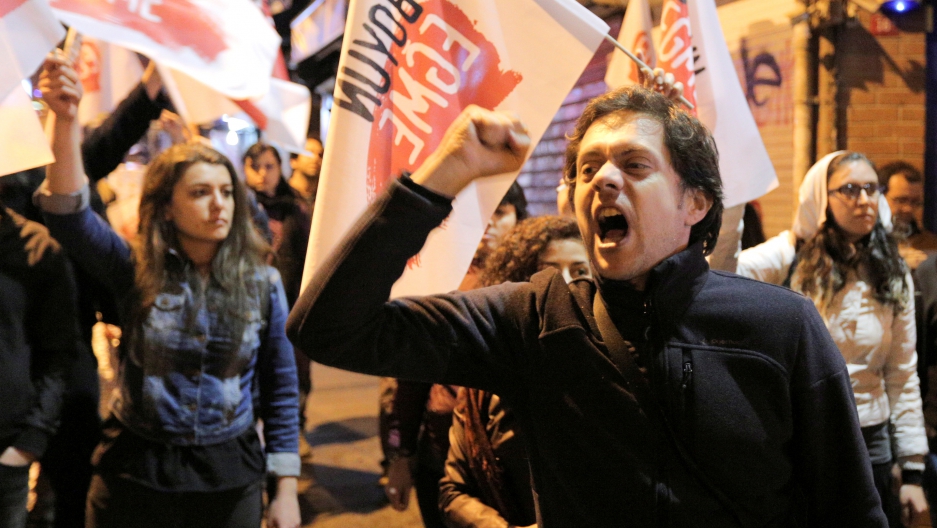 Youth in Istanbul, Turkey, protest the results of a referendum on their president's powers.

Sunday's vote in Turkey may have handed President Recep Tayyip Erdogan a victory, but the leader's drive for expanded powers is far from settled on Turkish social media.

The narrow margin endorsing a referendum to change the country's constitution sparked rancorous debate on Twitter and Facebook, as the country's main opposition party called on Monday for the vote result to be annulled.

"I've seen a lot of social searching and discussion saying, 'We won, but we didn't really win and what does it mean?'" says Zeynep Tufekci, who was born in Turkey and teaches at the University of North Carolina.

Tufekci says she's seeing disappointment on various social media platforms from the government and its supporters, because they'd hoped for a 60 percent margin but instead barely squeaked by with a win.

It was a “far narrower margin than I think the president and his supporters were expecting or wanted," says Kareem Fahim, The Washington Post's bureau chief in Istanbul. "As a result, the divisive atmosphere that prevailed in the lead-up to the referendum is still very much in evidence, and people are wondering what the aftermath of the vote is going to look like.”
The referendum was defeated in three of Turkey’s largest cities — Istanbul, Ankara and Izmir — which represent roughly a quarter of the country’s population, Fahim pointed out. "There was significant resistance to this proposal,” he says.

Tufekci says she's seeing plenty of outrage online, too. One major issue being discussed there: Late in the election, Turkish state authorities abolished a requirement that all the envelopes containing ballots be stamped with an official seal.

"There's a lot of concern that this last-minute change, that had never been done like this before, opens the possibility of ballot-stuffing," she says. "That's what the law says, that [envelopes containing ballots] have to be stamped, one-by-one, because otherwise somebody could sneak in 10, 20, 30 or 100 random envelopes. ... People took to social media saying, 'This can't hold, you can't change the counting rules in the middle of the election.'"

The Turkish voting system allows adversarial monitoring. Different political parties send representatives to polling places to observe balloting. Prior to this vote, Turkish authorities had required that the only ballots that could be tallied were those in officially stamped envelopes.

"Right now, what I'm seeing on social media is this constant turmoil because people don't really know what they can do, and they're just trying to raise their voice and say that this shouldn't have happened," Tufekci says. "They're trying to track down how many such votes might have been counted."

Every ballot in Turkey is supposed to be officially stamped. Otherwise, it's just a piece of paper a child could make in Word.

Apalling: Turkey's head of Electoral Board paves the way for ballot stuffing and other forms of election fraud. https://t.co/9qAqLsbRiC

#Turkey "fell short of international standards to which it is party" in referendum. Unstamped ballot decision "removed important safeguard"

The Washington Post's Fahim says Erdogan’s victory in the referendum leaves Turkey’s opposition in “a very weak state.” The main opposition Republican People's Party and the pro-Kurdish Peoples' Democratic Party (HDP) have said they will challenge the results, due to alleged violations. But “the space for dissent is much, much more restricted now," Fahim says. The HDP has been eviscerated. “Its co-founders were arrested, many of its members were arrested, and this party was supposed to play a critical role in opposing this referendum, so that voice is mostly eliminated,” says Fahim.

The Turkish electorate has never attempted to use a ballot to change its constitution since establishing a parlimentary system in 1923.