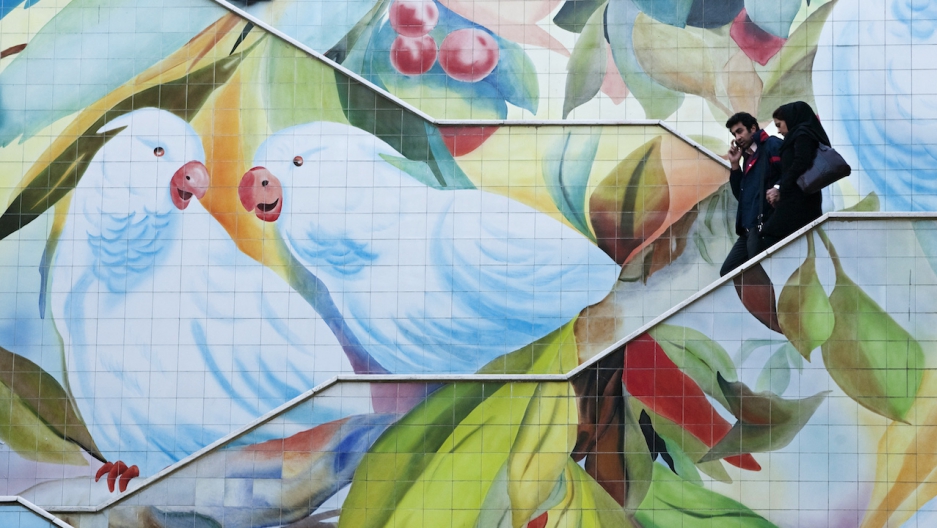 An Iranian couple walks down a stairway decorated with a tile mural in northern Tehran, Feb. 26, 2012.

I’m a bit of a masochist in that I like to make things harder for myself than they should be. As difficult as it is to get paid for writing these days, I’ve made the task even tougher for myself by limiting my subject matter to Iran. And, as if that weren’t enough, I steer clear of politics (I’m just not interested) and focus solely on arts and culture.

But thanks to the White House’s belligerent orange-hued resident, the load on my scrawny shoulders has lightened. Somewhat.

During the run-up to the presidential election, I, as a writer, was tearing my hair out in frustration. Trump, Trump, Trump, Trump, Trump. Isn’t there anything else these guys are interested in? I would think to myself. Before I hurled my MacBook off my balcony, however, things started changing.

One morning, I received an email from the editor of Columbia University’s Columbia Journal asking me to guest-edit its 2016 election feature. The gig sounded interesting, and I accepted. During my stint there, I received scores of articles, prose pieces and poems dealing with Donald Trump, many of which also dealt with immigrants and — my favorite subject — Iran. I saw that, by dint of Trump’s presence in our pieces, readers were willing to listen to what the journal’s contributors had to say. If it’s going to take The Donald to get certain people to read about Persian poet Hafez, I thought to myself, so be it!

After Trump’s election, and, in particular, the president's travel ban, everything changed. In terms of my own endeavors, they did for the better. Interest in Iran, one of the countries targeted by Trump’s ban, has been renewed. As a writer dedicated to promoting Iranian culture, stories I pitched ages ago have now, because of Trump, become more relevant than ever. “Highlight why this is important in light of Trump and the travel ban,” I’m often told by editors these days. In the past few months, readers of prestigious publications have come across pieces dealing with the profound influence and legacy of Iranian culture in what we so often take for granted as “Western” civilization.

Other Iranian creatives should take note. While there is certainly much to be angry about as an Iranian in the world today, there are also huge opportunities to be seized. In my experience and that of heavyweights in the realms of visual art and cinema, those critiquing Trump are now looking to highlight Iranian culture and provide outlets for people like me to finally tell things like they really are.

Therefore, to my fellow Iranian creatives (artists, writers, directors, whatever) in America and elsewhere: Instead of tearing your hair out like I once did, and tossing every expletive under the sun at Trump, think of this as your long-overdue time. Indeed, our time may truly have come. When else have we witnessed such interest in our beloved homeland in America and elsewhere in the West as now? Today, more than ever before in recent history, the world is thirsting to hear what we have to say.

This is our chance to tell them the truth about a much-maligned and misunderstood nation, so long perceived as the antithesis of all that is good and holy.

Mr. Trump — on behalf of all lovers of Iran everywhere — thank you.

Also, check out PRI's series, Tehran Stories, featuring The World's Marco Werman and reporter Matthew Bell; they went to Tehran to meet the people we don’t hear about in the headlines.