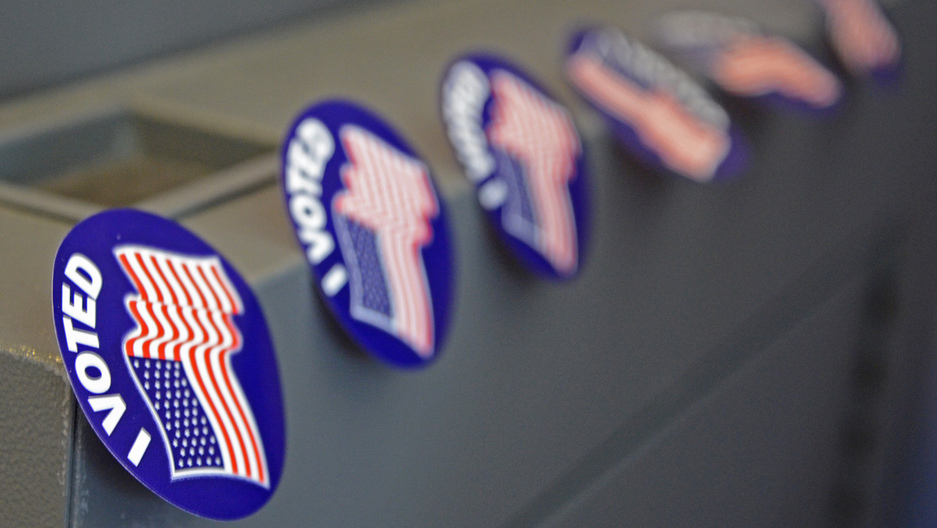 Voting stickers waiting for voters in Columbia, Missouri, 2015, are shown. A new program could help fight partisan line-drawing in congressional districts nationwide, by training mathematicians as expert witnesses in court.

After every new US census, states have to redraw their congressional districts to divide up their populations fairly. But in practice, these districts don’t always end up equal: Federal judges recently ordered Wisconsin lawmakers to redraw maps of the state’s legislative districts, after finding the districts had been shaped to favor Republican candidates. Allegations of gerrymandering are also playing out in states like Texas and North Carolina.

So what does a gerrymandered district even look like on a map? More like a carved-out jigsaw piece than a rounded blot, as it turns out. But as Tufts University mathematician Moon Duchin explains, gerrymandering can be difficult to prove, even when something about a district’s shape seems fishy.

“We've had justices saying that, ‘We know a bizarre, irrational shape when we see it, but we don't know what precisely should the threshold be which makes a shape too tortured, or irregular, or unreasonable,’” she says. (Take a closer look at district shapes across the US.)

She says the problem courts face often boils down to a single word that defies simple definition. “The word ‘compactness’ appears a lot — it appears in many state constitutions,” she says. “It’s not in the US Constitution, but it's become a traditional districting principle, so courts look to see if the shape is ‘compact.’ Well, they would, except the problem is, nobody knows what it means.”

In the end, she says, there are “dozens of competing possible definitions” for compactness. “And that cacophony of definitions has been one of the problems.”

But complex shapes are Duchin’s area of expertise — she’s a geometer. She’s also the founder of a working group, the Metric Geometry and Gerrymandering Group, which is planning to train mathematicians around the country to act as expert witnesses in gerrymandering cases.

“Geometers like me, we study this,” she says. “And we think we might have something to say that's helpful in making an intervention into deciding when a shape looks a little bit too strange to be fair.”

For instance, she says, there are a few ways we could measure compactness. “The first thing that your standard geometer would propose if you were to ask the question in the street is an isoperimetric ratio,” she says. In this case, that would mean comparing a district’s area to the square of its perimeter. The resulting ratio could be used to “score” districts for fairness.

“So, area to perimeter squared is a really classic score," Duchin says. But there's a catch: In this type of isoperimetric ratio, circles come out ahead. And as she points out, "circles don't pack together to make nice congressional districts in the state.”

Instead, she says, her group is thinking about different ways to measure dispersion. “You could look at average distance, you could ask the voters in the state how far apart are they from each other, or how long would they have to travel to get to, you know, a town hall and yell at their congressman in person. I like to think that one's pretty accessible.”

And frankly, mathematicians may not need to decide on just one compactness measurement, although Duchin says that’s what courts often ask for. “So, one thing I'd like to try to train mathematicians in how to talk about is that these days, there's been a breakthrough recently in our ability to take many scores into account at once,” she says.

The breakthrough? Computers, although Duchin calls them “a double-edged sword” when it comes to redistricting. “On one hand, they give you the ability to make more and more precise gerrymanders,” she says. “But on the other hand, now recently for the first time, they give you the ability to detect gerrymanders.” She explains that powerful algorithms can search district maps to find outliers, using multiple compactness scores. “If the current map really stands out among 10,000 alternatives, that's probably a red flag.”

A five-day “Geometry of Redistricting Summer School” will be held at Tufts this summer. Then, Duchin says, they’re taking the show on the road — to states like Wisconsin, Texas, North Carolina and California. And she is careful to point out: The program isn’t just for mathematicians. In fact, the first three days of the training will be available to the public online.

“We're working together across disciplinary lines so it's not just mathematicians, but we have political scientists, law scholars and litigators that are involved,” she says.

“And ... by partnering with litigators who know what we're about and who can help us think about useful training, we think we'll be able to provide a big bench of new people to diversify the expert witness pool and to sort of be available to be on hand in this landscape right now, with so many voting rights cases coming forward.”