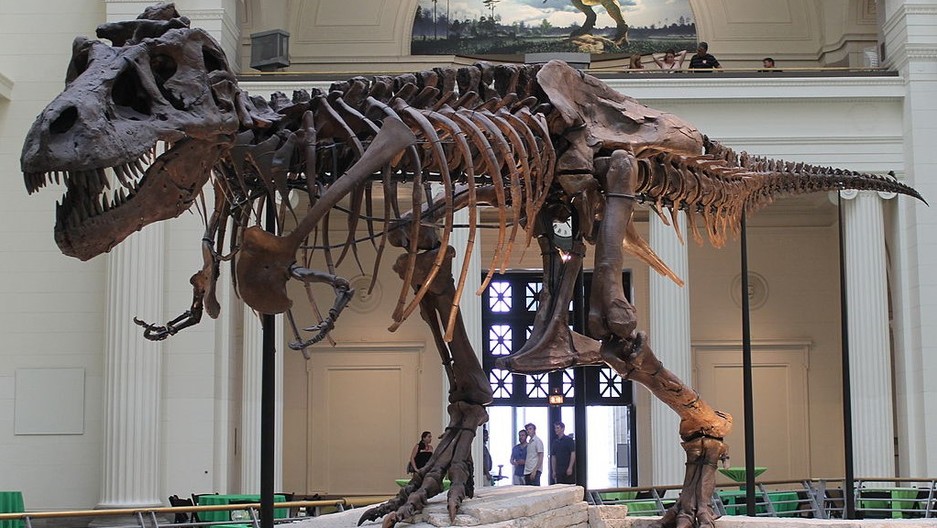 A new study shakes up the genealogy of dinosaurs like Sue, the Tyrannosaurus Rex skeleton at Chicago’s Field Museum.

Since the 1880s, we’ve classified dinosaurs into two major groups, based on the shapes of their hips — the Saurischia are “lizard-hipped,” and the Ornithischia, “bird-hipped.”

But according to a study published last month in the journal Nature, that genealogy may not be quite right. Researchers from the University of Cambridge and the Natural History Museum in London analyzed dozens of dino skeletons and determined that some of the dinosaurs we’ve been classifying as saurischians are actually more closely related to ornithischians. “So now, you have those two groupings sort of flipping a little bit,” says Brian Switek, author of the “Laelaps” blog at Scientific American.

He explains that in the old family tree, saurischians included theropods like the meat-eating Velociraptor and Tyrannosaurus and sauropods like the plant-eating Brontosaurus. “And all the way on the other side of the family tree, in the ornithischians, you had things like Triceratops and Stegosaurus and all those guys.”

But in the study, researchers suggest that theropods are actually closer to ornithischians than sauropods. They’re calling the new theropod-ornithischian branch Ornithoscelida. (Here’s a look at the revised dinosaur family tree.)

“So, basically, you have Tyrannosaurus and Triceratops being close relatives of each other, and then the dinosaurs like Brontosaurus all the way out on the other side of the family tree,” Switek says. “So it's a bit of a switch in the arrangement that's traditionally been held.”

Actually, he clarifies, it’s a big switch — and one that brings up big questions about dinosaur evolution. For one, theropods like Tyrannosaurus and sauropods like Brontosaurus both had pneumatic vertebrae, he says — meaning there were air sacs inside their bones that made them light and strong. With this genealogical shake-up, scientists will have to reconsider how the vertebrae evolved.

“If this new system is correct, that wasn't something that was inherited from a common ancestor,” Switek explains. “That was something that had to evolve twice. Or, there's some other weird evolutionary arrangement.”

But much like the fossil record, the new system is still under investigation. “I guess the bad thing, is, we don't really know whether to change the textbooks just yet,” Switek says. That’s because, for dinosaurs like the earliest ornithischians, the information we have is still patchy. “There’s not really a good record of those,” he explains.

“So there's the chance that, you know, someone's going to find a complete skeleton somewhere, and it's going to rearrange things all over again.”