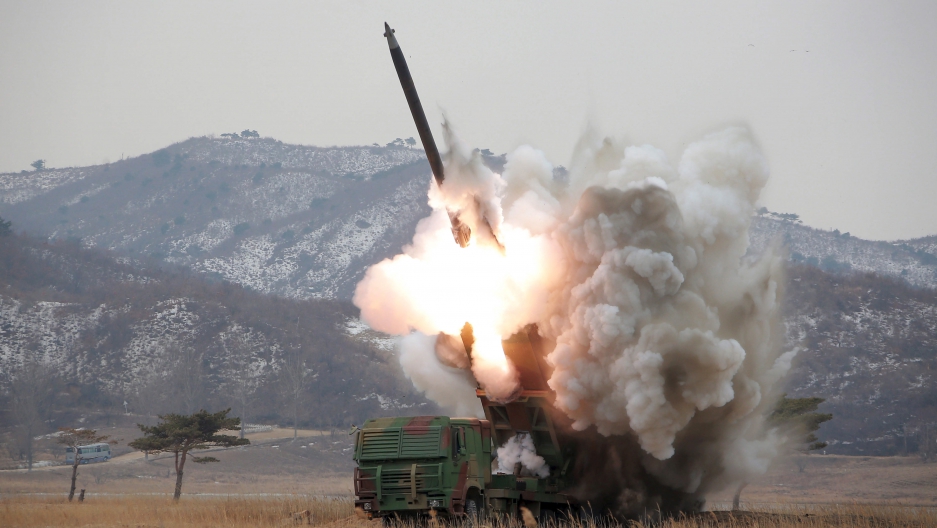 The possibility of a military confrontation with North Korea is producing some alarming headlines around the globe.

"North Korea: A potential train wreck in motion" blares the LA Times. "China warns of likelihood of war at any moment" cautions the Irish Times.

One place where there doesn't seem to be a lot of hysteria? Neighboring South Korea.

“I had the big South Korean cable station on all day yesterday, and I didn’t see any North Korean coverage,” laughs journalist Jean Lee.

Lee lives in Seoul. She’s a veteran foreign correspondent and expert on North Korea who formerly reported from Pyongyang.

“The South Koreans are just accustomed to [North Korean military threats]. They’ve been living with this for decades. They are not seeing anything particularly unusual about it.”

While Americans on Twitter are freaking out about a potential World War III, Lee says South Koreans are preoccupied with domestic news.

Trump and Kim Jong Un two crazy men trying to one up the other, what could possibly go wrong? Answer zombie apocalypse. #NorthKorea #MAGA

“South Koreans are much more obsessed now with their political upheaval. They just saw their president impeached. They’re much more concerned about the vacuum in leadership at the moment,” she explains.

That said, anxiety over North Korea is not entirely absent in South Korea. The new commander of South Korea’s Marine Corps said this week that his troops are ready to “mercilessly retaliate” against North Korea’s provocations. And Lee says she’s heard concerns, here and there, from her neighbors in Seoul. “I spoke to a taxi driver today [about it]. And he said 'this happens every spring, especially in March and April. But this time with a nuclear threat I’m worried because if there is a nuclear war, that’s it. We’re all dead.'”

Lee sees a generational gap at work here: “The younger generation, they’ve grown up with this. They’ve had it all their lives. And they’re somewhat blasé [about] it. The older generation, I find, the generation that remembers the war, is very worried.”

Read more: If you're young and South Korean, North Korea might not seem so scary

All in all, says Lee, South Koreans are not expecting World War III. Or the zombie apocolypse. “Let’s just say they’re not running out and stocking up on bottled water and ramen noodles."