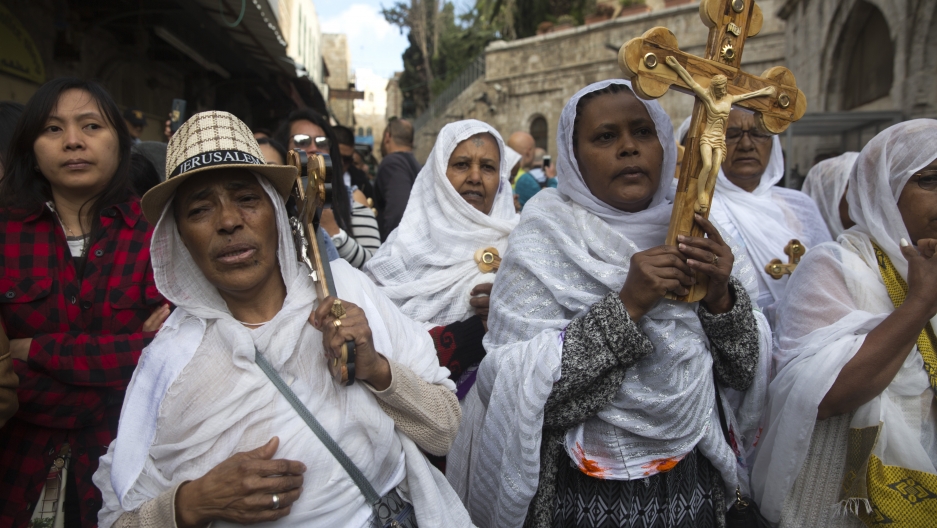 Christian Orthodox pilgrims from Serbia as they pray, sing and carry wooden crosses before entering the Church of the Holy Sepulchre in the Old City of Jerusalem.

On Good Friday, down the ancient warren of cobblestone streets inside the walls of the Old City, Christians from every corner of the world process along the Via Dolorosa, or “The Way of Sorrow.”

Good Friday, which comes before the celebration of Easter Sunday, marks the holy day of remembrance when Christian faith holds that Jesus was sentenced to death and crucified.

The somber processions along the traditional stations of the cross here are always emotional for the faithful. But the recent Palm Sunday attacks on two Coptic Christian churches in nearby Egypt, which killed 45 people, seemed to make them even more resonant this year. The so-called Islamic State claimed responsibility for the suicide bombings, just the latest attacks by Islamist militants on the Christian minority in the Middle East’s largest country.

Christians in Jerusalem from all over the world said they were praying for and marching in solidarity with Egypt’s Coptic Church — one of the oldest in Christendom, founded by St. Mark the Evangelist, who arrived to Egypt in 60 A.D. Many of the pilgrims marching here hailed from countries that know firsthand the destructive power of religious violence, including Serbia, Indonesia, Lebanon and Ethiopia.

Abate Tsadik, wearing the red cap donned by his Ethiopian Orthodox tour group, said, “In our country, we don’t have direct violence between Muslims and Christians yet. Not yet, but we fear it is coming."

He was referering to ISIS's mass execution of Ethiopian Orthodox Christians in Libya last year, which was captured on video and viewed around the world.

“The fanatics want to divide us. They know exactly what they are doing,” he said. “And we must not let them succeed.”

With the Coptic community still burying the dead in Egypt, I asked some of the Egyptian pilgrims if they were fearful for the future.

“We are not afraid,” said Father Luka Nasrallah, 47, an Egyptian Catholic priest, who was leading a pilgrimage from his hometown of Sohag, the industrial center in Egypt.

Nasrallah said he felt the solidarity of the many pilgrims from around the world gathered in Jerusalem. But he wanted the world to know that, while life is difficult for Egyptian Christians, they “do not and will not live in fear.” He says the community was traumatized, but that it will carry on as it has through centuries of martyrdom.

Standing with a large wooden cross that his fellow parishioners had carried on the Via Dolorosa, he said, “We are ready to meet with Jesus and this day, Good Friday, is especially a day not to be afraid.”

Charles M. Sennott reported from Jerusalem. A version of this story was first published by The GroundTruth Project.