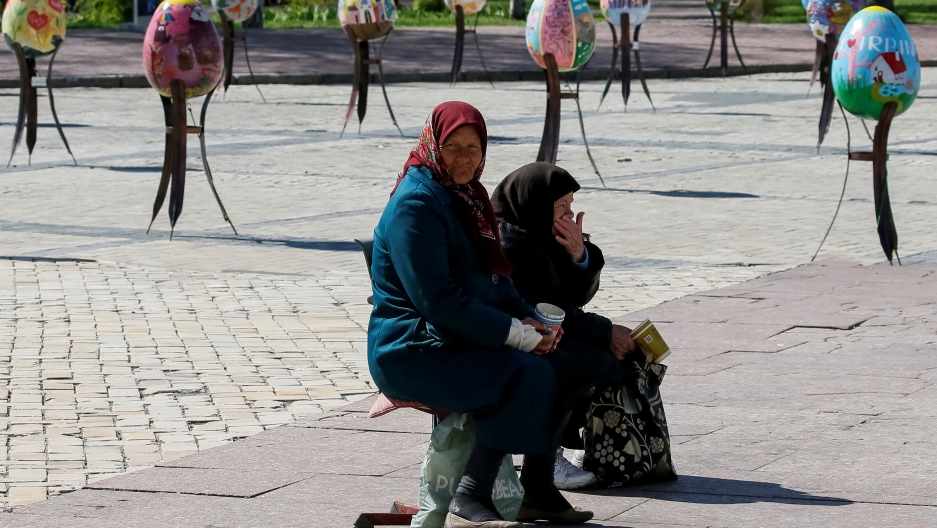 On a recent evening, several Ukrainian women pushed their wheelchairs along the narrow hallway to the kitchen, where they pounded dough into a pie.

For the dozens of women and children sheltered here in a run-down, four-story community center in Odessa, sharing food is just one small effort to keep together a community ripped apart by war. Across Ukraine, authorities registered almost 1.8 million internally displaced people, driven from their homes and villages by the violent conflict between Russia and Ukraine started in 2014. Thousands of people have been killed. Salaries have plummeted.

Women at the shelter escaped the war, but each day of their life remains a struggle — for themselves and for their children. Many are disabled, for example, but there is no elevator.

“I just bump down the staircase in my wheelchair,” a shy woman, Natalia Chakhonatskaya, said in a recent interview. She struggled not to cry when she described the last three years of her life.

In the spring of 2014, men in balaclavas, with clubs in their hands, seized first the city administration building in her home town of Donetsk, then moved on to the central police station and other official buildings, replacing Ukrainian flags on the buildings with Russian national flags or the flags of a self-proclaimed Donetsk People’s Republic.

Chakhonatskaya, a former dancer, has been in a wheelchair since falling from a window years earlier. During the first days of violence, Ukrainian authorities evacuated Chakhonatskaya and dozens of other people with disabilities from Donetsk; moving about 70 of them to Odessa, an elegant old port city on the Black Sea.

“When we complain to authorities about conditions of our life, they threaten to move us to Borshi, a village three hours drive from town,” Chakhonatskaya said.

Her neighbor, Marina Yunko, a 34-year-old IDP from Luhansk, gave me a tour of the IDP center: “We drag our kids’ and neighbors’ wheelchairs up and down the staircase, sometimes using a self-made elevator,” the woman pointed at the narrow metal rails on the stairs, barely seen in the dark.

Yunko, a friendly 32-year-old woman smiled cheerfully. She said every resident of the shelter was accustomed to bad living conditions:

In summer 2014, armored vehicles full of militants rolled around her home in the Luhansk region. The first violent clashes broke out between pro-Russian rebels and Ukrainian forces. Many local women put on military uniforms and joined the rebel forces, but Yunko's biggest priority was her son’s health. Her baby, Ilya Yunko, was born with cerebral palsy, a condition that required constant treatment, massages, medications and surgeries — the combat zone was not a place for the boy, who was 11 at the time.

Yunko begged her husband to take them away from the conflict zone, to peaceful regions of Ukraine.

“Both my husband and his mother sympathized with the separatists, they played dangerous games, without thinking of the half-paralyzed kid and his future," Yunko said, describing with strong emotions the events of that dark time.

“To save my son, I decided to divorce my husband and run away from Donbas, first to Kiev, then to western Ukraine, then to Italy, then back to Ukraine, until we finally found this place in Odessa last year,” she explained. “But local people do not like IDPs, they accuse both us and our children of being separatist collaborators.”

Today, many in Ukraine use the derogatory term “vatnik,” a type of cheap coat worn by gulag prisoners, to describe supporters of the “Russian world,” or the military expansion of Russia.

"The war caused health complications for IDPs with disabilities, pensioners, women with little children, who had to move from place to place, away from their usual family doctors and therapies,” Tatiana Coopert, a Kiev-based researcher for Human Rights Watch, told The Daily Beast. “Every day the IDPs face issues: The women we interview, who have escaped from the rebel-controlled territories, continue to be constantly abused and accused of supporting the militants, because of their origins.”

Although the war has not received recent media attention, earlier this year the conflict with pro-Russian rebels escalated once more. Ukraine said it was at war with Russia. In spite of plenty of evidence proving Russia’s support for the militants, Moscow insisted it had nothing to do with the shelling and bombing of Ukrainian cities and blamed Kiev for violence against the Donbas population. The violent conflict with Russia-backed militants has killed more than 5,000 people, separated friends, broken families; it has affected the lives of millions of people in Ukraine, leaving more than one-quarter of the population below the poverty line.

According to Bloomberg, average monthly income in Ukraine fell to $194 this year. Frustrated and disillusioned people felt heartbroken seeing the ongoing disaster in their country and often accused IDPs of supporting the idea of Russia’s invasion.

“I witnessed Ukrainian [soldiers] yelling at two old women from Donetsk at a check point on the dividing line, on a bitter cold night,” Coopert said. What was wrong about the women? “The two pensioners were coming from Donetsk and in the eyes of the military they were separatists just because they continued to live in Donetsk, though the women said that they loved Ukraine.”

Yunko’s mind is still far from politics. Last winter her son, Ilya, now 13, stopped walking. His cerebral palsy worsened, putting the boy in bed for three months. To get Ilya back onto his feet, his mother had to take him in for a surgery. But the only affordable hospital qualified to help her son was in Tula, a town in Russia.

Yunko’s got legal support from Olga Tkachenko, who helped her get the permit she needed from her ex-husband so she and her son could make the trip.

Tkachenko works for the “April 10th” volunteer organization, which tries to improve conditions for Donbas IDPs in Odessa. “I am still embarrassed to see so many IDP women and children barely surviving in these miserable conditions,” Tkachenko said. Maria Gaidar, a deputy on Odessa’s regional council, agreed: “The fact that there is still no elevator in the center for people with disabilities is a shock. The life conditions for IDPs should be improved as soon as possible.”

For now, residents of the shelter on Krasnaya Avenue are barely scraping by. The Yunkos live on $147 a month in support from the state; about $50 of that goes to Ilya’s medications. Two beds, a little desk and a few hangers with ironed clothes are all they have. But Ilya still encourages his mother.

“You should not worry, I have many innovative ideas and plans for my future business,” Ilya says with a big smile.

“I am sure you will!” his mom exclaimed with a big happy smile, hugging her son. “For as long as we have a shelter to live in, it is going to be OK."