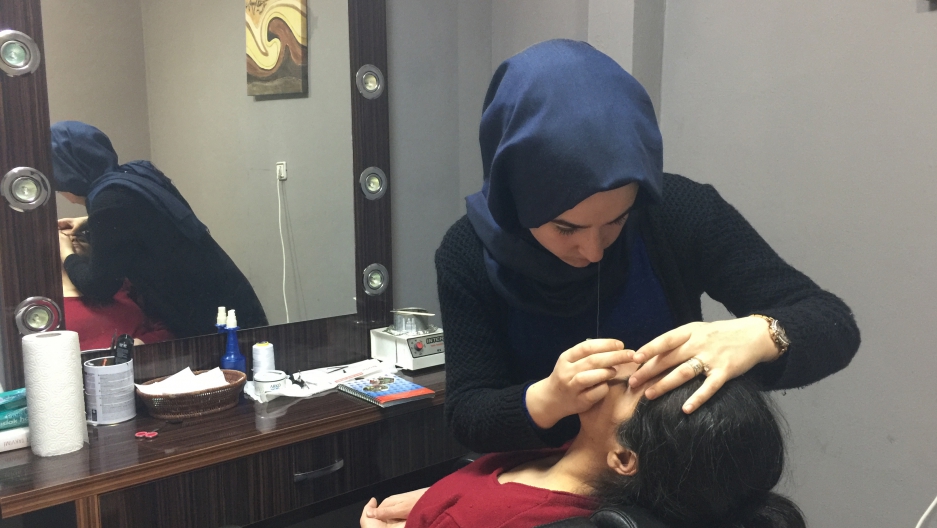 Elif Koc, 18, shapes a customer's eyebrows at the Twins salon in Istanbul. Kroc is voting yes on Sunday's referendum. But she says the issue is dividing her family.

At the Twins Beauty Salon on the Anatolian side of Istanbul, the staff generally avoid talking politics with their customers. But these days, the referendum keeps coming up.

On April 16, Turkish citizens will vote "yes" or "no" on a referendum that would change the Turkish constitution from a parliamentary to a presidential system. Proponents say it will make the government run more efficiently. Opponents say it’s a power grab. Polls suggest the race is close and many are still undecided.

If the referendum passes, the role of prime minister would be abolished; the multi-party parliament would lose leverage. And President Recep Tayyip Erdogan and his ruling Justice and Development Party or AKP would consolidate power and control. Many Turks see the vote as a referendum on the president himself.

All that sounds good to one of the hairdressers here, Seyit Turan. He's a member of the AKP.

“Other political parties slow things down. With one man in charge, things will run better,” he says, explaining why he plans to vote “yes.”

But others worry a “yes” vote could spell the end of Turkish democracy. Erdogan has already fired and jailed thousands of critics. He’s censored freedom of speech, even during this campaign. In March, at least one vocal "no" voter was detained on charges of insulting the president on social media.

Tuncay Altan, another hairdresser, says he voted for the Islamist AKP in previous elections. But he’s disillusioned with Erdogan, especially after the failed coup in July. More than 140,000 people have been accused of collusion in the coup, and many lost their jobs or were jailed.

“We want a more secular country, and we want freedom of expression. When you look at it, journalists can’t do much,” he says.

Erdogan has enjoyed widespread support since becoming prime minister of Turkey in 2003. The country’s economy has improved with a growing middle class; his policies have brought clean water, better infrastructure and a ceasefire with separatist Kurds. But the ceasefire didn't last and Erdogan's critics say he’s become increasingly authoritarian.

The owner of the salon, Hulya Aslan, smiles at three customers as they pay and leave. The women say they’re voting "yes." But Aslan is stilling weighing her options.

“My husband and I are genuinely undecided. We listen to one side and we say they’re right, and then we listen to the other side and we think they are also right,” she says. “It's confusing.”

In another room, Elif Koc threads and shapes a customer's eyebrows. Koc, 18, is a first-time voter, and she says the referendum is dividing her family. When her fiancé’s parents visit, Koc's uncle presses them to vote "no." But her fiancé and his parents say they’re voting "yes." Koc says she feels caught in the middle. But she'll follow her fiancé’s advice.

“I am on the ‘yes’ side because we trust Erdogan,” Koc says. “Maybe it will be better for us like this. At least the other parties will shut up because everything will be in his power.”

Koc and the other salon workers say they're grateful they can disagree but still work together peacefully. They hope whatever the results of the vote on Sunday, other Turkish citizens can do the same.