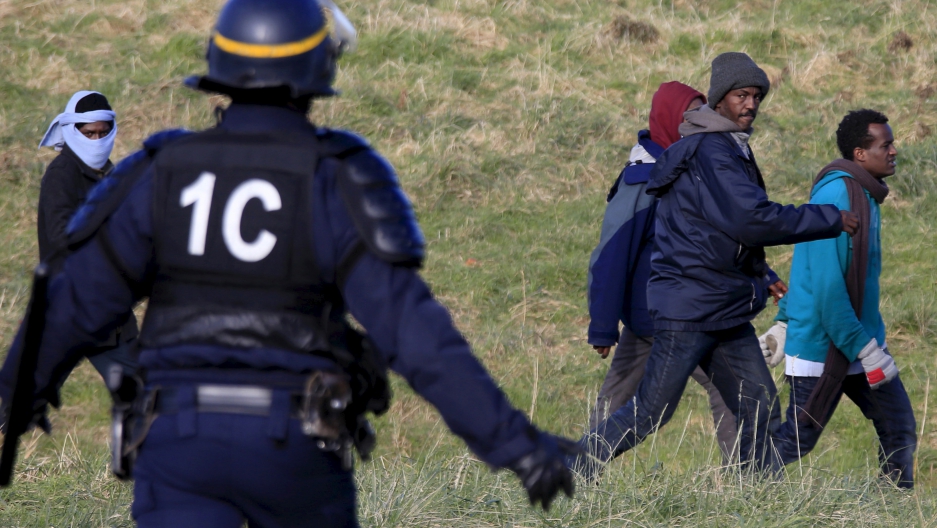 A French riot policeman stops migrants in a field near Calais, France, as migrants gather in the hopes of attempting to board lorries and making their way across the Channel to Britain, January 21, 2016.

Every night in Calais, France, aid groups give out food and clothes to migrants. On a cold winter night, a young boy stands by a van, looking wide-eyed and shy. He speaks neither French nor English. One of the men here tells me he is from Eritrea and his name is Tachloin.

I asked the man how the boy was able to come on his own on foot, all the way from Eritrea in northeast Africa. He laughed and said, “They come, you know. It’s a miracle, you wonder. They come with us.”

There are many more unaccompanied minors like Tachloin in Calais these days. While most children this age in France or the US are in middle school studying, playing sports and hanging out with friends, a growing number of African teenagers flee oppression and undertake a dangerous journey to seek opportunity in Europe — on their own.

In Calais, France, where hundreds of migrants have arrived recently, the number of young teenagers is on the rise. Charities who work in the area say they now make up about 70 percent of the migrant population. They come mostly from Ethiopia, Sudan and Eritrea. Camaraderie is what enables such young kids to travel more than 5,000 miles on their own.

That’s what Michele Peter from Eritrea says. He made the journey here with other teenagers. The boy, who’s sitting in the grass with friends, has a baby face and a worn-out look. It’s late, and most French kids his age would be in bed by now. But this boy doesn’t even know what street he’ll sleep on tonight.

He says he can speak Italian because he lived at a youth center in Rome last year.

"I help them and they help me,” he adds, in Italian.

Peter is 13 and he says there are many more boys about his age here.

Laurent Vernet is a volunteer who’s helped many Eritreans. He says there’s a major reason they run from their homeland: the military.

“They’re fleeing conscription, which, as you know in Eritrea has no limits. So you could be for 20 years in the army,” he says. “And conscription starts at 15 or 16, that’s why they are leaving quite young.”

Many of those youth turn up at a housing center for minors in nearby Saint Omer. Jean-François Roger, who runs it, says the number of foreign unaccompanied minors in France and in the area has risen sharply in the past couple of months.

And only 10 percent of those youngsters want to request asylum in France, down from 30 percent last year. Most are determined to get to the UK. But the British government voted to take in only 350 unaccompanied minors under the so-called Dubs Amendment, so youngsters who had hoped to get there legally, are now trying their luck sneaking across.

Roger says these children are much more vulnerable on the road than adult migrants.

"Youth can fall prey to smugglers who are holding on to them for as long as they can,” he says. “In order to pay for their trip, some children will prostitute themselves, be raped, or take risky jobs along the way. So we are dealing with the most vulnerable group of people, and we try to help them as best we can with the traumas they have experienced.”

Roger says a number of migrant girls who arrived at the center pregnant said they had been raped. And even for those who arrive in France unharmed, being here does not guarantee safety. In Calais, migrants report police harass and attack them daily.

In the center’s dorm room, 17-year-old Andy Balay says in broken English that he got caught by police while trying to jump onto a truck last night.

“After, I come here. In Calais in this time, police beat people ... always. This time difficult,” he says. He points to the injured ankle of one of his friends in the dorm. ”This man got beat by police too,” he says. His friend nods in agreement.

Adda Abbas is a coordinator at the center and he has heard this a lot.

“Sometimes kids get to us wounded,” he says. “They got hurt while fleeing police arrest, so they have scrapes or sprained ankles. But we also see kids who were beaten, there is no question about it, and whom we have to take to the hospital for care. Some say the police beat them up so it leaves no marks on the body. We have not seen that happen, but we do see bruising and hematomas, that’s undeniable.”

In Calais, Zaccaria Adoun came to the charity Secours Catholique to shower and get some fresh clothes. He’s 17, from Chad. And he says the police are constantly harassing him and his friends. He is worried about talking to me about it and asks that I don’t take his picture.

“They beat people,” he says. “Just this morning, we were sleeping in a wooded area, and the police showed up, and one of them called us the 'N' word, and another started hitting me. I told him, ‘Why are you beating me? You have no right’ and I said I was going to press charges. They looked worried and said, 'OK, OK, just scram.'”

That night, at the aid group food distribution, tension is palpable when the police show up and ask volunteers for ID.

One cop asks to see my official press credentials.

The police stay for a while with their vans’ high beams aimed at the crowd and leave without arresting anyone.

Eriemies Haile, a 22-year-old from Eritrea, is used to this scene. But he says he’s also used to the police spraying tear gas to disperse groups of migrants.

He says this happens virtually every day.

In fact, aid groups say migrants diligently return sleeping bags permeated with tear gas so they can be washed and reused.

While associations working with migrants say they hear repeated complaints of police violence, the region’s police authority says they have not received a single official complaint.

A lawyer volunteering with migrants, who asked not to be named, says that makes sense because migrants are afraid authorities will retaliate and undermine their asylum claims even in the UK. Besides, few migrants would stick around long enough to see a complaint through the courts, the lawyer said.

There are plenty of other ways these youngsters can get hurt. Falling while trying to get on or off trucks, running across the highway, and also dangerous encounters with angry mobs or angry truck drivers. Several migrants died in highway accidents in the past couple of years.

“We all run across the highway and some people fall,” says 13-year-old Michele Peter. “If it goes on like this, someone's going to die for sure."

He says he’s tried to reach British shores every night without success, but he seems confident he will reach his destination.

Eriemies Haile is smiling and putting a positive spin on this unaccompanied teenagers’ exile.

“We protect each other, you know?” he says. “We have no legal authority to protect us. If you can’t run, you can hide, we’ve got tactics you know?”

For youth who fled violent situations in their homeland, crossed the Libyan desert on foot and the Mediterranean Sea on a raft, facing road dangers, or police brutality, is no deterrent. After all, there is only one 20-mile strait left to cross to get to England, the land of their dreams.

As Peter says, “no one can be free until they start living their dream.”