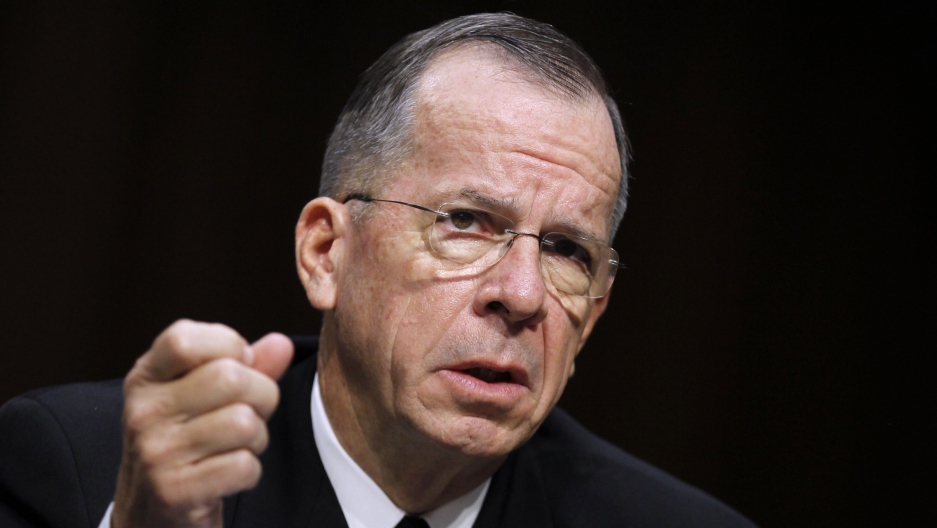 Then chairman of the Joint Chiefs of Staff, Admiral Mike Mullen speaks at a Senate Armed Services Committee hearing on Capitol Hill in Washington, on Sept. 22, 2011.

Secretary of State Rex Tillerson met with his Russian counterpart Sergei Lavrov and President Vladimir Putin in Moscow on Wednesday. It was the first Russia visit by a Trump Cabinet official, and after the US blamed chemical attacks and launched missile strikes on Russia's ally, the Syrian government, few expected any diplomatic breakthroughs.

Tillerson said afterward in a joint press conference with Lavrov that US-Russia relations have a hit a "low point."

The secretary of state — who as Exxon Mobil Corp. chairman was awarded Russia's Order of Friendship and had billions at stake over US sanctions against the country — emerged as a big Kremlin critic this week.

Also on Tuesday, a declassified, four-page report revealed that the White House believes that the Russian government participated in a cover-up of last week's chemical attack, adding yet another layer of complexity to the perceived position of the Trump administration on Russia and Syria.

Adm. Mike Mullen, who served as chairman of the Joint Chiefs of Staff from 2007 to 2011 under Presidents George W. Bush and Barack Obama, says Washington must keep the door open with Moscow.

“We need a relationship with Russia,” he says. “We certainly don’t need to be friends, but from an international-geopolitical point of view, we do need that relationship.”

Mullen says he hopes Tillerson can use his previous ties with Russia to build a meaningful connection between the White House and the Kremlin. But he is skeptical about some of the Trump administration’s policies — however differently various officials convey them. For example, National Security Adviser Lt. Gen. H.R. McMaster has said the US is both trying to defeat ISIS and remove Assad from power, but the former Joint Chiefs head isn’t fully on board with this strategy.

“I think the ISIS piece is doable — we’ve seen them, certainly in the last couple of years, lose an awful lot of geography, specifically, and momentum in that regard. That said, they’re still a very tenacious, lethal threat, and an ideological threat that we’re going to continue to have to deal with,” Mullen says.

“With respect to Assad, I’m just someone, and maybe it’s just the empirical evidence over the last several years, I’m not a big fan of regime change; of effecting regime change.”

Using all options, including US military force, to try to introduce regime change in Syria will likely bring America into “more of a quagmire” in the region, he says.

“I am certainly one willing to give a new president enough room and time to deal with the reality of the job — I certainly watched that with a new president, with President Obama,” he says. “Governing is a whole lot different from campaigning. I’m also encouraged by the people the president has around him. I know Secretary [of Defense James] Mattis, General McMaster, and so I think he will be well-advised by them.”

Though he does not believe it was strategically calculated to be carried out this way, Mullen says the timing of the US strike on Syria — which was done while President Donald Trump was meeting with Chinese President Xi Jinping — sent a strong message to leaders in Damascus, Syria, Moscow, Beijing, and even Pyongyang, North Korea.

“[The message was] clearly this is a president who will when he believes it’s right, use military force,” Mullen says. “I heard this morning in the media that President Xi issued a statement, or China issued a statement, indicating that they would be willing to try to work to denuclearize that [Korean] peninsula. I’m encouraged by that feedback if you will.”

Related: President Trump, do you have a red line when it comes to North Korea?

The US moved warships to the Korean Peninsula earlier this week in a move to deter the North from pursuing additional nuclear tests. According to Mullen, North Korean leader Kim Jong-un is lethal and unpredictable and must be stopped before he attempts to fire a nuclear weapon at the continental United States.

“I think he’s got to be stopped ahead of time,” Mullen says, adding that the US must partner with China in order to stop North Korea.

“I know the administration has been working very deliberately through Korean options,” Mullen adds. “This is a new team. They’re just getting their feet under themselves, and so they’re at a point where they’re now starting to be more deliberate in what they’re doing — they understand certainly the threats that are out there … I’m actually encouraged by how it’s being approached at this point.”