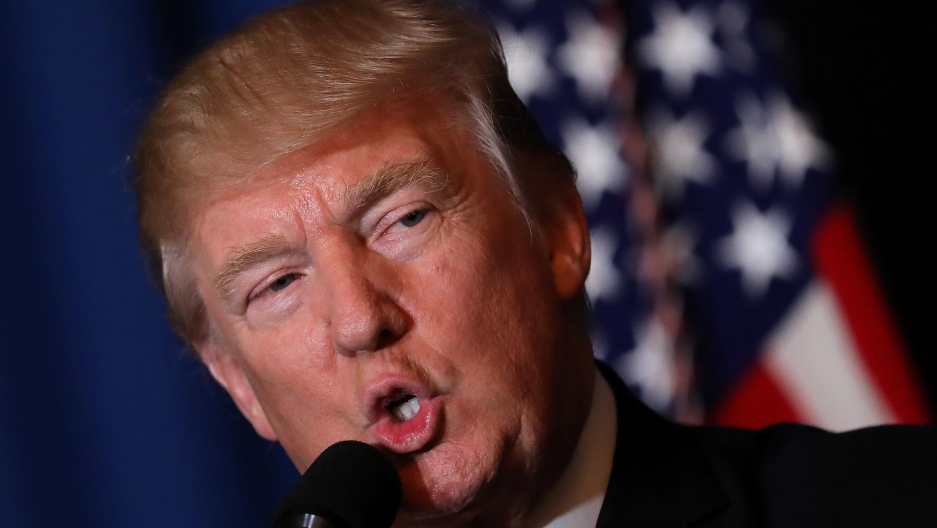 US President Donald Trump delivers a statement about missile strikes on a Syrian airfield, at his Mar-a-Lago estate, April 6, 2017.

While furious voices dominate Russian media following the US cruise missile strike in Syria, a few are giving President Donald Trump an opportunity to "save face."

"They're saying it's something Trump could not really prevent, that it's how the US political machine works," says reporter Natalia Antonova, who has been monitoring Russian state media since the US strike on Syria's Shayrat airbase on Thursday.

Even Russian Prime Minister Dmitry Medvedev, who was quick to protest the US airstrike, put the blame more on the Washington establishment than on Trump. "By taking this military action the US administration has proved its extreme dependence on the opinion of the Washington establishment, which the new president criticized so strongly in his inauguration speech," Medvedev said.

Trump, throughout the 2016 election season, gained the kind of celebrity in Russia that had been reserved for President Vladimir Putin. Putin and Russia were frequently mentioned in Trump tweets, a big boost for a nation that wants to be seen as a major player.

The new joke in town is that Russia leaked the disastrous DNC e-mails, which should never have been written (stupid), because Putin likes me

Coverage of Trump's inauguration was unprecidented in Russian media, compared to previous US inaugurations.

And even as the election hacking scandal led the White House to cool its pro-Moscow rhetoric, Russians still liked Donald Trump. In this tweet, he's getting positive spin for scheduling a meeting with Chinese President Xi Jinping:

Antonova, an American journalist based in Moscow, says that even after the US president approved an attack on Syria, some Russians are just not ready to give up on Trump.

"A lot of writers and commentators are focusing on the fact that Trump is an outsider," she says. "They want to spin this as 'He's come to DC, he's a maverick, he wants better relations with Russia but he can't achieve them because Congress is sneaky and is opposed to that.'"

"So they're giving Trump a lot of leeway," Anotonova says, "should he decide to resume his efforts to better relations with Russia."

Trump is getting some help this week from Secretary of State Rex Tillerson. In Tillerson's meeting with Russian counterpart Foreign Minister Sergey Lavrov, he will be working to salvage the US-Russia relationship in the wake of the US attack on Syria, a Russian ally.

"He's very well respected in Moscow, because he has a business background — which they like — and I think that they also see him as a very smart man — which he is," says Antonova, "and I don't think [the Russian reception] is necessarily going to be extremely chilly." But, she says, now that Tillerson is representing the US government, his relationships with Russian leaders can't be the same.

Tillerson will be trying to encourage more cooperation from Russia to stabilize Syria. But how do the US and Russia work together to defeat ISIS, when they disagree about the government of Syrian President Bashar al-Assad?

"I think that Assad is ultimately dispensible to the Russians," says Antonova, "but he is not going to go easily. And the Russians are going to try to extract many concessions from the US before that actually happens."

Antonova says many uncertainties lie ahead for Russia.

"They know that there's a lot of potential in Syria for things to go very wrong, very quickly," she says, "and I think they have begun to realize that Trump — maverick, outsider, all good things as far as they're concerned — is also a more unpredictable figure than they perhaps anticipated or banked on."

As for general Russian public opinion of Trump's America, Antonova says it depends on who you ask. "I think the majority of Russians ultimately see the United States as an enemy. And I don't mean that in any kind of dramatic sense — like they're thinking about nuking us every day — I don't really think that's on anybody's mind. I think it's more like a passive anger at the United States."

With that as a backdrop, Tillerson will meet with Lavrov on Wednesday.