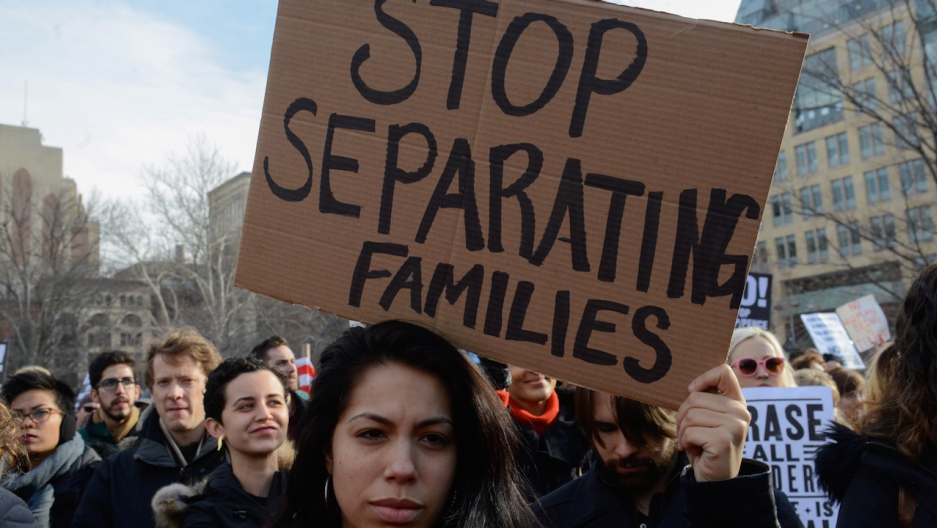 People participate in a protest against US President Donald Trump's immigration policy and ICE raids, in New York City, Feb. 11, 2017.

So far, the Trump administration's crackdown on illegal immigration and people living in the US without proper authorization has mostly targeted individuals, not employers or groups of laborers.

Ten years ago, New Bedford, Mass. was the site of a large worksite raid during President George W. Bush's second term. The operation was part of a string of raids across the country.

They caused terror in the immigrant community, but it doesn't seem they did much else.

But it wasn’t long ago that the US saw large-scale worksite raids, particularly under presidents Bill Clinton and George W. Bush.

Some advocates wonder whether large worksite raids could happen again today, given the expansion of deportation forces under President Donald Trump.

Raids are a politically potent tactic. But are they effective? To learn more, PRI's Global Nation spoke with immigration law experts Kevin Johnson, dean of the University of California Davis School of Law, and Michael Wishnie, a professor at Yale Law School, to discuss the recent history of immigration raids in the US and what they expect next.

Global Nation: Is there a recent pivotal moment in the US government's approach to people who hire unauthorized workers?

Michael Wishnie: Worksite enforcement really accelerated after the adoption of employer sanctions after 1986, when Congress passed the Immigration Reform and Control Act. Congress made employers into immigration agents, in a way, and that was something that had not occurred before.

Before 1986, employers did not check whether a new employee was a citizen or an immigrant. After 1986, employers were obligated to check that information and retain paperwork, I-9 forms, in their personnel files.

Employers had to suddenly screen workers and keep files on workers, which was intended to make government enforcement easier and more tempting. You could go to a worksite, and ask employers to see the paperwork, and then use that as a way to try and identify unauthorized workers.

By the 1990s, during Clinton, there was criticism from the right for failing to vigorously enforce immigration laws. That resulted in stepped-up worksite enforcement [raids], which provoked a backlash from employer and business associations, and community and faith leaders because the effects of this enforcement are so adverse to our economy, our communities, our families. So there was a growth in worksite enforcement under Clinton in response to criticism for being soft, but then an ebbing in the end because of the backlash pressures. We saw this same dynamic during [George W.] Bush’s administration.

There were several large, high-profile worksite raids during Bush’s second term, especially around 2006. What do you think motivated these raids?

MW: Some people at the administration probably hoped that drawing attention to the raids would scare people and prompt them to “self-deport” — that life would become so miserable that they would leave. But I don’t think that’s the motivation that everyone in the Bush administration had. I think that some were just doing the next big enforcement action.

But there, I think, you saw the same dynamic — the kind of back and forth swing of the pendulum — that Clinton experienced, that Obama experienced and, I suspect, the current president will experience. There is a reaction. These raids are not costless.

Often, Democratic and Republican presidents have learned to their peril that these high-profile, police helicopter, handcuffs, TV cameras-style raids have real costs that ultimately come back to haunt them politically.

Do you think raids are effective?

This also tells you a bit about the economics of undocumented immigration. You see that employers in highly competitive industries want relatively inexpensive labor and are willing to violate the laws to get that labor. And the truth of the matter is that the enforcement of employer sanctions by the US government is not very extensive. So among competitive businesses, particularly in construction, the service industries and farm labor, you see very little change in undocumented immigration despite raids.

MW: I think they are quite ineffective. Also, the dynamic that leads some employers to hire unauthorized workers already involves a risk tolerance for the possibility that they may be raided. Most of the time, the employers are not vigorously punished.

One of the things I learned when I looked at data on raids, and it’s been a little while ago, so I can’t say for sure it’s still true, but I suspect it is, is that there is a very high correlation between worksites that are raided and ongoing labor disputes in the same worksite. That suggests to me that, fairly often, the tip that brings in an enforcement action is coming either from an employer who is trying to retaliate against workers who are trying to organize over some workplace dispute, or from a disgruntled employee who is trying to retaliate against an employer. A very high percentage of worksite enforcement is simply ICE [US Immigration and Customs Enforcement] as the witting or unwitting agent of a labor management dispute. It’s not doing anything at all to discourage the employment of unauthorized workers or deter unauthorized migration — the goals of the 1986 law. It’s really only taking sides in some independent labor management dispute.

What are the alternatives to raids?

KJ: More strictly enforcing employer sanctions laws, focusing on ensuring that employers comply. That’s going to take more enforcement in the interior of the country, as opposed to the border. But when we talk about increasing immigration officers now, it tends to be at the border, as opposed to interior enforcement. We could also have a national ID card, of some sort, that could indicate lawful residence in this country. Employers could be required to use it.

MW: I’d start by asking what’s the purpose of worksite raids, or E-Verify or I-9s? What is the purpose of these laws trying to prevent the work by unauthorized immigrants? The purpose, as is articulated consistently by Congress, is generally to deter illegal immigration, on the theory that people come because they can get hired; and, second, is to protect US workers from competition from desperate undocumented workers who will accept low wages and work very long hours in dangerous conditions. These twin purposes are valid. But I think that immigration enforcement in the worksite undercuts both of the goals because by making the worksite a place of enforcement, the laws and the agencies grant a very powerful, coercive authority to those employers, and encourage the bottom-feeding employers — the outlaw shops — to prefer a workforce of undocumented workers who they underpay and abuse to the detriment of US workers.

It’s counterintuitive, but my own view is that the best alternative is really the only alternative — if we are serious about deterring illegal immigration and protecting US workers, we should repeal employer sanctions. We should end the prohibition on the employment of unauthorized workers. Then, employers will not see a competitive advantage to preferring these workers who they can exploit. The incentive to migrate to those jobs would also be reduced, but of course not evaporate.

What can we say about who gets targeted by raids and who doesn’t?

KJ: When you look at some of the bigger workplace raids, they tended to be in places that were primarily employers of Latinos. In Postville, Iowa, almost all of the workers were Guatemalans. I think there is a racial profiling of Latinos in this country as presumptive foreigners.

There are undocumented immigrants who come to the United States besides Mexicans and Central Americans, but they don’t tend to be the subject of these kinds of raids or these kinds of enforcement. And the same is true generally of immigration enforcement. If you look at the most recent number of removals of people from the United States, most of the people removed are Latino. And a lot fewer, probably closer to 50 to 60 percent of immigrants, undocumented or not, are Latino. So what we have is a disparate enforcement of immigration laws in this country, and in no small part it is the result of racial profiling.

Are there signs so far from the Trump administration that these types of worksite raids might return?

KJ: We're going to see more enforcement. I’m not sure whether we’re going to see more workplace raids because politically they are somewhat dicey. You get employers complaining about the raids and the disruption to their business, and you also get civil rights and immigrants groups complaining about the impacts of raids on the civil rights of non-citizens. There may be some high profile raids like Postville, like New Bedford, just to remind employers that it’s a possibility.

I also tend to think the Trump administration is going to rely more on things like E-Verify. [Trump] has suggested that Congress pass an order requiring the use of it. Right now, for employers, it’s generally voluntary to participate. Not all states require it.

But it’s difficult for me to predict what this president is going to do when it comes to weighing the political options.

MW: Given [Trump's] rhetoric — his anti-Mexican, anti-Latino verbiage — and given his insistence that he will be cracking down at the border, and not only at the border, I take seriously what he says. I actually take him at his word that he will direct his administration to find ways to round up and deport a lot more people. And if they really want to hit their numbers, I think they have to go to workplaces because it’s very hard to hit the kind of numbers that they claim to want do to — 2 million, 3 million a year — one by one. You have to go to where there’s a large group of people, and that’s the workplace.

I have a feeling it might turn out to be a bit like healthcare, where Trump will say that it’s “complicated.” We may see some high-profile raids with a backlash, where it turns out that it’s not actually good for business to disrupt a workforce and scare off people in whom you've invested and trained. You’re already hearing from agricultural employers, alarmed at how hard it will be to plant and harvest without a very substantial undocumented immigrant workforce.