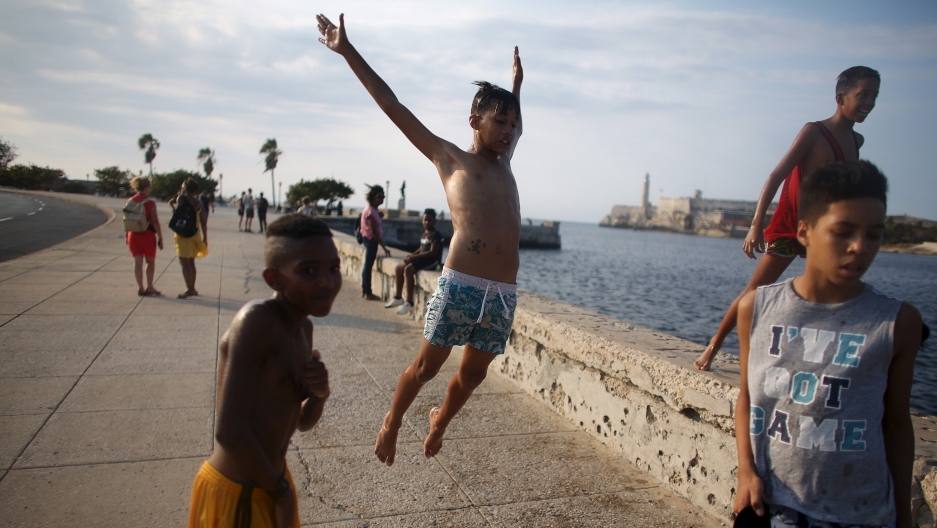 Seven-year-old Havana resident Jennifer Alvarez loves school. Her favorite subject is math, but “sometimes it’s complicated,” she says. Alvarez is a sweet little girl, being raised by a single mother. It’s not just math that’s complicated, the second-grader says. Life is too.

“Sometimes you want to go somewhere and then you can’t and it’s a bit complicated,” she says. Why? “Because you don’t have money, you can’t afford the bus fare, there’s lots of things you can’t afford.”

Despite this, Alvarez has big dreams for when she grows up. “I’ll be like a teacher or a doctor,” she says.

Her mother, Marlene, is a teacher, but her salary was so low she was forced to look for a job in someone’s private business. It’s a conundrum many professionals face today, especially young people.

With the Cuban economy struggling, infrastructure crumbling and low salaries paid by the Cuban state to most professionals, young people are wondering what their future holds. The economy increasingly relies on tourist dollars, and a university degree doesn’t earn one anywhere near as much as working as a waitress, or a taxi driver.

That’s the dilemma facing Tania García. On a recent Sunday afternoon she was hanging out at her boyfriend’s house with her friends. The group of young adults just finished watching a soccer game but they stayed put at home as none had any money to go anywhere.

García graduated from a five-year university course with a degree in biology.

“I really like research work in the labs, I love the world of biology,” she says. “Not so much studying little animals, I prefer the human end — like immunology and genetics, these are the areas I like.”

After graduating, García really only had one option with her qualifications, and that was to work in a government research facility.

“I work for the state, but of course a small business owner earns much more than a state worker,” she says. “Here it’s really hard for young people.”

García says she considered not going to university and finding a job in tourism. But her parents pushed her to study. And she loved her five-year degree.

“When I graduated, I said, ‘I’m going to work and help out my mom, my parents’ — but no, that hasn’t happened,” García says. “I still live under my mother’s roof. It’s my mom who helps me! And that’s not what I want. Now I want to help my parents. And I want some control over things but I feel like I’m still a child. But I’m 25 years old.”

While she and her friends can go to the movies or even the theater — these kinds of outings are cheap and charge in Cuban pesos — bars and restaurants are more expensive and you often have to pay in the dollar equivalent currency, which García doesn’t earn in.

“Going out is a bit limited because sometimes you want to go to a certain place and then you can’t because you don’t have the money,” she says.

Her words echo those of 7-year-old Alvarez.

Like many young adults still living at home, Dariel Ramírez understands that this wasn’t the reality for his parent’s generation.

“In my mom’s time, well she studied and graduated and got a job and with her salary — which wasn’t super high — she had enough to live, to go out when she wanted, to eat out, to buy clothes,” Ramírez says. “It’s not like that today, times have changed.”

Ramírez graduated as a zoo scientist and vet, and that’s the field he’d love to work in. “It’s what I love doing,” he says. “But here’s the thing, the salary is really low. It’s not enough to survive. It’s complicated.”

As they hang out in her living room, Odalis Ramírez is in the kitchen cooking for the half-dozen young adults.

It’s a big family Sunday dinner, she says. She learned to cook after she graduated college and got her first job. “When I moved out on my own was when I learned to cook. I would call my mom and say, ‘Mommy, how do I do this?’ And she’d tell me and that’s how I learned.”

She doesn’t know when her own kids, now in their 20s, will be able to afford to move out on their own.

Across town Michel Ahumada is forging ahead, pursuing the things he loves doing.

Ahumada is a railway technician by trade. He’s also a singer and model. He runs a weekly fashion show where he trains young people in the art of catwalk modeling. But he says there’s an expectation that even models will go to college.

“When a model says she is a model she is also the same as an educated woman,” Ahumada says.

At one of his recent fashion shows, a stunning young woman approaches the designer Ahumado works for, and asks if she too can be a model. The designer looks her up and down and tells her she would be great, but she needs to study first.

Ahumado doesn’t begrudge not making his living solely from modeling. “Everyone says to me, ‘but how do you do all this modeling work when you work in trains?’ But working on the railroads has always been something that has appealed to me. I really like trains a lot,” he says.

Ahumada’s lucky — he’s found a way to make it in Cuba’s two-tiered economy.