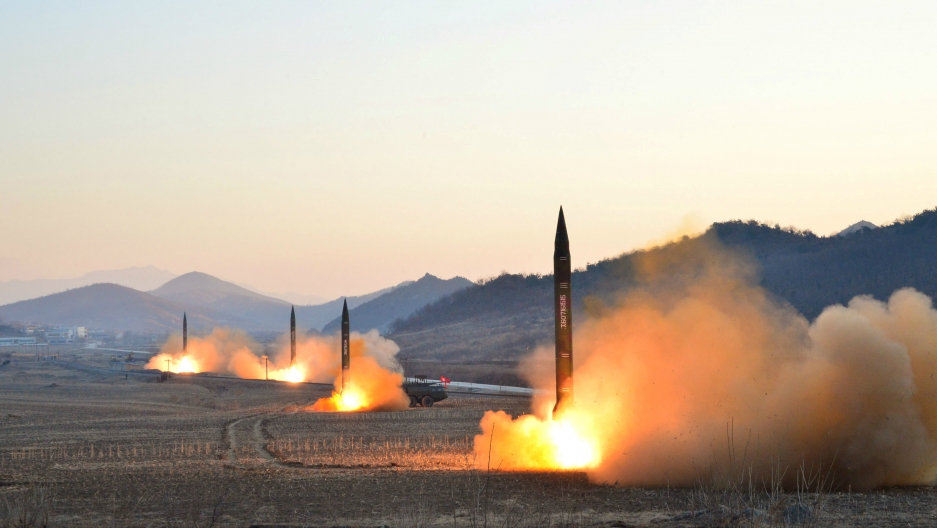 As a US strike group led by an aircraft carrier steamed toward the Korean peninsula Sunday, a senior official said President Donald Trump has asked to be provided with a range of options for eliminating the North Korean nuclear threat.

The US naval move will certainly raise tensions in the region and comes hard on the heels of a US cruise missile strike on Syria that was widely interpreted as putting Pyongyang on warning over its refusal to abandon its nuclear ambitions.

North Korea denounced Thursday's attack as an act of "intolerable aggression" and one that justified "a million times over" the North's push toward a credible nuclear deterrent.

Secretary of State Rex Tillerson insisted in an interview broadcast Sunday that the United States does not intend to try to remove the regime of Kim Jong-un.

"That is not our objective and so the whole reasons underlying the development of a nuclear program in North Korea are simply not credible," Tillerson told the ABC program "This Week."

He said the United States expects China, the main ally of North Korea, to do more to rein in the regime in Pyongyang.

"They have indicated that they will, and I think we need to allow them time to take actions," Tillerson said.

US National Security Adviser H.R. McMaster insisted, however, that in the meantime it is "prudent" to send the strike group to the Korean peninsula, criticizing North Korea as a rogue, nuclear-armed nation engaged in provocative behavior.

"Presidents before and President Trump agreed that that is unacceptable, that what must happen is the denuclearization of the peninsula," McMaster told Fox News.

"The president has asked them to be prepared to give us a full range of options to remove that threat," he added, apparently referring to Trump's advisers.

Pyongyang is on a quest to develop a long-range missile capable of hitting the US mainland with a nuclear warhead, and has so far staged five nuclear tests, two of them last year.

Expert satellite imagery analysis suggests the North could well be preparing for a sixth, with US intelligence officials warning that Pyongyang could be less than two years away from developing the means to deliver a nuclear warhead to the continental United States.

North Korea on Wednesday fired a medium-range ballistic missile into the Sea of Japan ahead of a US-China summit.

The isolated North is barred under UN resolutions from any use of ballistic missile technology.

In February, the North simultaneously fired four ballistic missiles off its east coast, three of which fell provocatively close to Japan, in what it said was a drill for an attack on US bases in the neighboring Asian country.

A nuclear-capable SLBM system would take the North's threat to a new level, allowing deployment far beyond the Korean peninsula and a "second-strike" capability in the event of an attack on its military bases.

Asked if the development of a long-range ballistic missile would mark a red line for Trump, Tillerson said: "If we judge that they have perfected that type of delivery system, then that becomes a very serious stage of their further development."

The White House said Trump spoke Saturday with Japanese Prime Minister Shinzo Abe about the US cruise missile attack on an airbase in Syria and agreed to cooperate more on regional issues including the North Korea nuclear threat.

On Thursday and Friday, Trump hosted his Chinese counterpart Xi Jinping for talks during which he pressed Pyongyang's key ally to help curb the North's nuclear weapons program.

Trump has threatened unilateral action against the reclusive communist state, a threat that appeared more palpable after Thursday's strike on a Syrian airfield following an apparent chemical attack.

The head of the North American Aerospace Defense Command, or NORAD, which provides missile detection for the region, said Thursday she was "extremely confident" of US capability to intercept a potential intercontinental ballistic missile (ICBM) bound for America from the North.

But General Lori Robinson expressed concerns for the type of ballistic missile powered by a solid-fuel engine that Pyongyang said it successfully tested in February.

"Amidst an unprecedented pace of North Korean strategic weapons testing, our ability to provide actionable warning continues to diminish," Robinson said in written testimony to senators.

And while a US unilateral strike on North Korea from a shorter range might be more militarily effective, it likely would endanger many civilians in South Korea, experts warn.

China has agreed to "strong" new measures to punish North Korea if it carries out a nuclear test, Seoul said Monday after the US signaled it may act to shut down Pyongyang's weapons program.

South Korea's top nuclear envoy made the comment after talks with his Chinese counterpart Wu Dawei.

"We agreed that there should be strong additional measures based on UN Security Council resolutions if the North pushes ahead with a nuclear test or an ICBM launch despite warnings from the international community," Kim Hong-Kyun told reporters.

The North may stage a "strategic provocation" to mark key political dates this month, Kim said, adding that Wu's visit would serve as a "strong warning" against Pyongyang. Wu did not speak to the media after the talks.