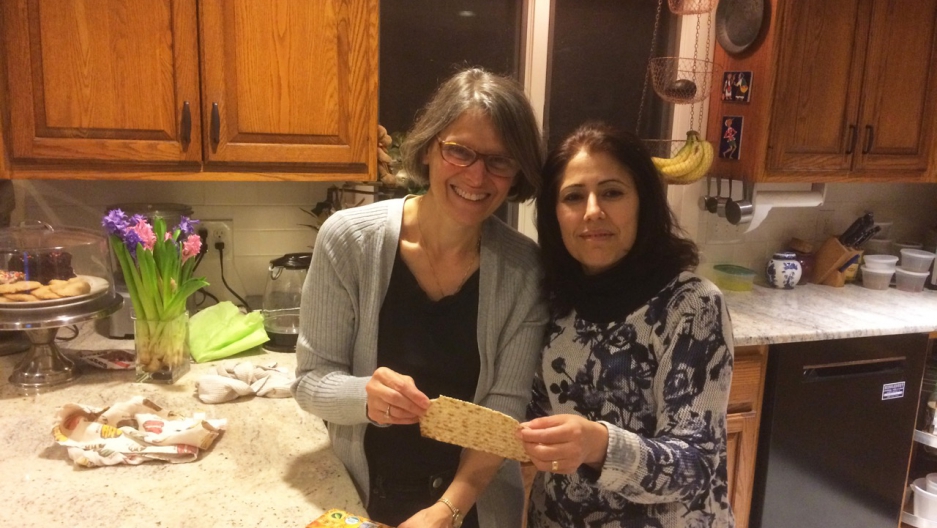 Mizgin (right), a Syrian refugee from Aleppo, and her family are living with Rachel Miller's (left) family for the year.

Rachel Miller is grating horseradish in preparation for her Seder — the Passover meal — as Mizgin, her husband Adris, and their three children — ages 12, 9 and 5 — watch her work. The family are refugees from Syria and they’re spending the year living with Rachel and her husband in a Boston suburb. The youngest is going to a Jewish preschool.

Mizgin’s family fled the city of Aleppo in 2012 and temporarily resettled in Istanbul. They are Yazidi, a small religious minority that's been repeatedly persecuted and that the United Nations says suffered attempted genocide by ISIS. The family arrived in the United States in January, just after Donald Trump’s inauguration and days before his first refugee ban.

Now they’re experiencing their first Passover. The Jewish holiday is a refugee story, too. During Passover, Jews celebrate their exodus from slavery in Egypt 3,000 years ago. The bitterness of the horseradish that Rachel is grating is meant to signify the bitterness of slavery.

Mizgin sniffs the horseradish root, which she says looks to her like ginger. Nine-year-old Areen declares it “very spicy.” But Adris tastes it and describes it as hot and delicious. Rachel isn’t surprised by his reaction. After two and a half months of living together, she knows he likes spicy food.

They move on to the matzo. “When Jews left Egypt, they didn’t have time for bread to rise. It was flat, like the khubz you eat,” she tells the family, explaining the significance of the unleavened bread. “To remember that, on Passover, we don’t eat anything that rises. We eat matzo.”

Like Mizgin’s family, Rachel’s family has their own experience with loss. Both of Rachel’s parents were Holocaust survivors from Czechoslovakia. Her mother, Channah Berkovits, was sent to Auschwitz when she was 13.

Channah, who lost her mother, father and two brothers during the war, is now 85 and lives near Rachel.

Because of her own loss, Channah says she understands it in Mizgin, who refused to leave her home in Aleppo until the bombs were coming one after the other.

“I was at my house until the last minute,” Mizgin says in Arabic. “The hardest part is when you have to leave everything you’re attached to. We took only our kids and our clothes. We all went out crying.”

"Loss is very demanding," says Channah, who also knows how hard it can be to get beyond loss.

“The fear of loss stayed with me all the time,” Channah recalls. “When my children for one reason or another didn’t come home when I expected them, after a certain time, I couldn’t control my emotions. Like post-traumatic stress disorder, it stays with you.”

But survivors find support and comfort where they can. One place is the kitchen, where cultural learning goes both ways.

Mizgin and her family have introduced Rachel and her family to Syrian foods: makloubeh (often with meat and rice), molokhiya (Egyptian spinach), mahshi (stuffed zucchini), kibbeh and stuffed grape leaves.

Rachel’s family observes Jewish kosher laws, which among other rules means no mixing of meat and dairy, and separate plates and utensils for each. It’s something she explained to Mizgin and her family early on.

But Passover raises the bar on those restrictions. For the eight days of the holiday, observant Jews don’t eat bread or grain; they’re not even allowed to have it in the house. That was a shock for Mizgin’s family, since bread is a staple of their diet. So Rachel has cordoned off an area where the family can eat bread during Passover.

Rachel’s mother Channah says one reason she managed to survive the Holocaust was because people helped her along the way. “I consider my survival helped by the human touch of whomever I encountered,” she says.

That, no doubt, influenced her daughter’s decision to host a Syrian family of five for a year. But Rachel has discovered it’s not something that everybody would do.

“When I told people we’d host a family, they were astounded,” she says. “They wanted to know why. I said, ‘What we’re doing is just sharing resources we already have. It’s not like we’re making sacrifices, putting our family in danger.’”

When Rachel thinks about what people did to save lives during the Holocaust, and the help her parents received, she says “this is really nothing.”