Syrian refugees arrive on a dinghy on the Greek island of Lesbos, Sept. 7, 2015. A year and a half later, thousands of asylum-seekers remain stuck on Greek islands uncertain what their future holds.

He saw public beheadings after ISIS stormed his home city of Mosul, Iraq.

Later came an attempted coup in the country he escaped to, Turkey.

“Helicopters were shooting, F-16 jets were bombing the parliament — it was terrifying,” he recalls of the incident in Turkey last July.

Now, Ahmed is on the Greek island of Samos, hoping to gain asylum in Europe. As he relays frenetic accounts, yachts and fishing boats are bobbing in the glistening Vathi harbor. But a lengthy limbo on this picturesque island is not easing his mind.

Ahmed is in detention along with more than 1,000 other migrants and refugees, in a squalid ex-military facility with capacity for barely 600 people. For five months he has lived under a plastic canopy. Most others are in either tents or metal containers. They are some of the reported 14,000 migrants still stuck on the Greek islands after a historic exodus to Europe. 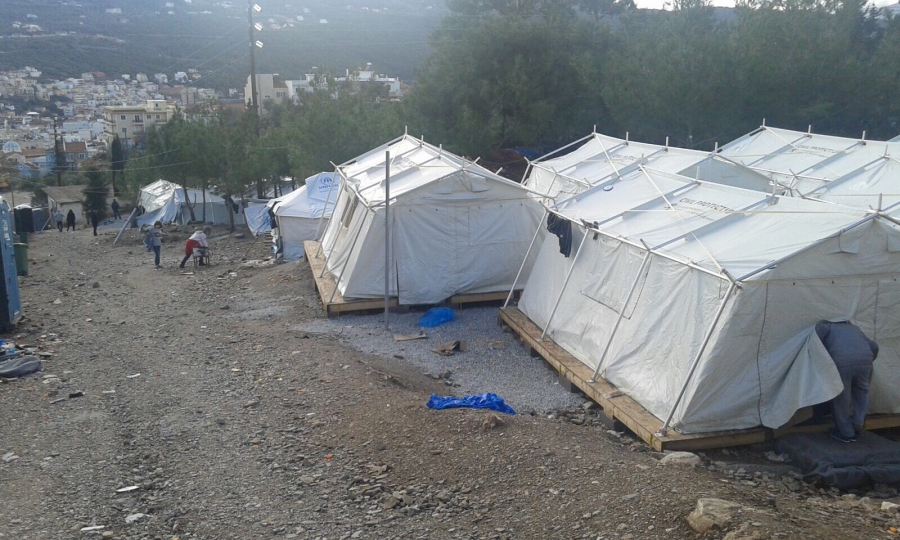 The shelter in Samos, Greece, where migrants have to await the authorities' decision of what to do with them next.

If their asylum is denied, a deal between the European Union and the Turkish government dictates that Greece will deport them to Turkey. Leading humanitarian groups have condemned that agreement for “prolonging and exacerbating suffering” of refugees.

For many, this uncertainty is taking its toll. Mental health is one of the latest casualties of the refugee crisis.

That’s especially evident on Samos, where there were 12 suicide attempts and six instances of self-harm in the detention center in January alone. Ahmed recalls it painfully well. 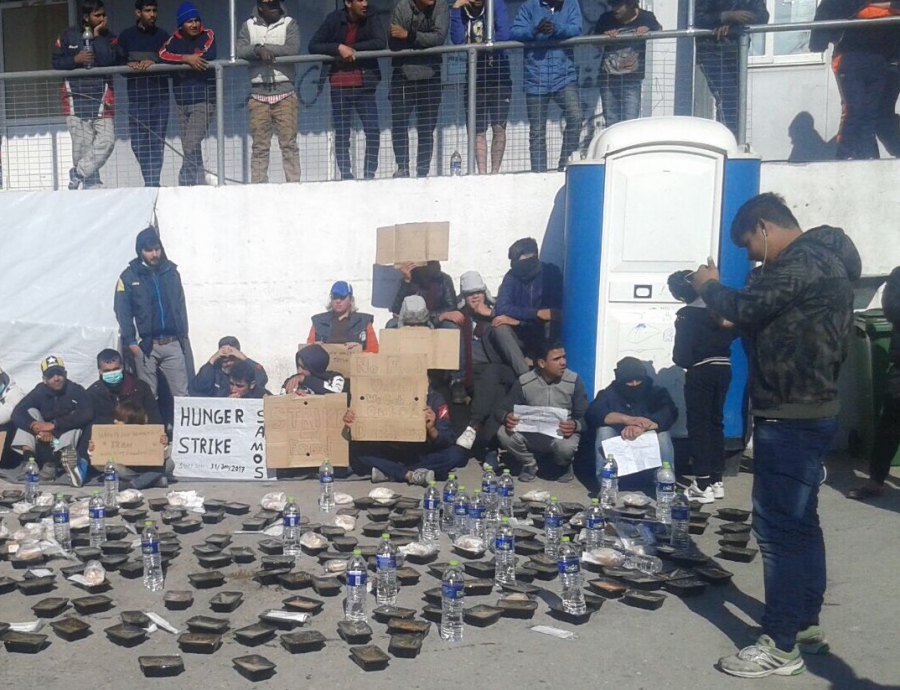 Migrants went on hunger strike recently at the Samos shelter.

“Some people are cutting their veins here, taking many tablets,” he says. “I know someone that took around 40 tablets. He’s lucky he didn’t die, but others have. People are literally tearing out their hair.”

In late March, a 25-year-old Syrian was found hanged in an apparent suicide at Greece’s largest port of Piraeus. He had asylum application papers on him.

Despite the purgatorial misery in Greece, fear of deportation stalks migrants here. Turkey could also send them back to their countries of origin, including Syria and Iraq.

Dr. William Gorman, a clinical psychologist at the Marjorie Kovler Center in Chicago, has worked for decades researching refugee trauma and treating survivors or torture. Last month he visited Samos and found many of the people in detention were in a disturbed state.

“The most common reactions of refugees I have witnessed on Samos include post-traumatic stress disorder with acute and pervasive anxiety symptoms and major depression, with grief and loss, guilt and remorse, helplessness, and hopelessness, at times accompanied by thoughts of suicide,” Gorman says.

“On the other hand, it is also important to recognize the incredible resilience many refugees show in the face of so much adversity — to still find meaning and value in their lives, solidarity and compassion with others, and determination to surmount all the hardships and find a better life.”

You can see Turkey from here

At its shortest point, the forbidding cliffs of Turkey’s Mount Mycale are barely half a mile across the Aegean Sea from Samos. Some refugees have been known to swim across to Greece. But most are smuggled there on boats, now for as little as $200 per person, compared to an average of $1,200 during the peak flows of 2015.

The small stretch of water between the Greek island of Samos, left, and Turkey.

The small stretch of sea claimed the lives of at least 434 asylum-seekers in 2016, according to the International Organization for Migration. In the year since the EU and Turkey reached the resettlement deal, drownings have sharply decreased, although 11 Syrians, including five children, lost their lives after their raft capsized off Samos' coast last month.

In March 2016, when European leaders were desperate to prevent more of the record numbers of migrants from rushing in, they hastily signed the agreement with the Turkish government. In exchange for 6 billion euros in aid and visa waivers for Turks to travel to Europe, Turkey would increase sea and land border patrols and accept migrants deported from Greece.

Turkey is host to the world’s largest population of refugees — almost 3 million. Most of them fled the six-year-long conflict next door in Syria. The Turkish government insists it is working to integrate Syrians into its society. But many arriving in Samos speak badly of their time in Turkey, and of getting trapped in an intolerable web of exploitation and segregation in the workplace.

Majd Thabet, a 24-year-old from Damascus, used to fly around the world as cabin crew for an international airline, until Syria’s war broke out. His negative experience in Turkey propelled him to sail to Europe to rebuild his life and career.

“I don’t exist. I am nobody over there,” he says of Turkey. “[Turkish President Recep Tayyip] Erdogan is using us like a card in his hand to push Europe into giving him money. I understand some money is to help us, but I didn’t see any evidence of that when I was in Turkey. If you are going to make a deal to keep us there then you must ensure that every refugee has rights. If not, then of course people want to come to Europe.”

This corner of the world is steeped in historical significance and poignancy. During the sixth century BC, a wave of artisans and thinkers flocked to the island of Samos to help construct its thriving commerce and architecture, some remains of which still stand. Many of those newcomers arrived from Mesopotamia and Assyria, the same blood-strewn regions that hundreds of thousands of exiles escape from today.

Ahmed, the Iraqi asylum-seeker, recalls vivid details of the days when Mosul fell to ISIS, and of the campaign of gruesome executions, incessant religious harassment and plummeting economic conditions that followed.

“I still remember when they cut the head off the magician in the main square. The executioner used a sword. The first time didn’t cut the neck completely, so he had to try again,” he says. “That was in 2014. I have lost three years of my life.”

“I’m telling you Europe, do you have that courage? If you want, we’ll send the 15,000 refugees to you that we don’t send each month and blow your mind,” Turkey’s interior minister, Suleyman Soylu, told a crowd of supporters last month.

Could the breakdown of Europe’s refugee deal wreak havoc on the Greek islands? Vangelis Orfanoudakis of the Samos branch of Doctors Without Borders thinks so.

“We have a dystopia now but what could happen in the near future would be an increase in arrivals but with the same detention polices that we are experiencing,” he says. “And that will be a ticking bomb.”