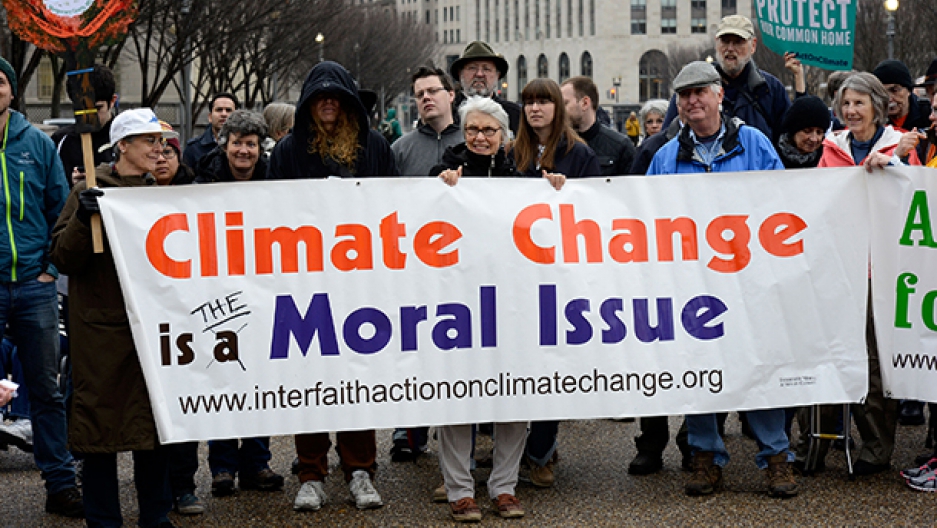 An interfaith contingent of the Global Climate March protests in Washington, DC, in 2015, is shown here. Studies indicate that people are more likely to be convinced of the reality of climate change when the message comes from a trusted source, like a religious organization.

A study in the journal Global Challenges suggests that attitudes among climate change deniers are not immutable, even among the most skeptical. The way information is presented can change people's opinions, under certain circumstances.

The new study builds upon a larger body of research that has examined what happens when researchers inform people about the overwhelming scientific consensus that climate change is real.

Research has consistently shown that “the average American will change their own estimate of that consensus by about 20 percentage points when they're simply told that 97 percent of climate scientists are convinced that human-caused global warming is happening,” says study co-author Anthony Leiserowitz, director of the Yale University Program on Climate Change Communication.

Unfortunately, a “very concerted disinformation campaign” has been underway for many years to “undermine and discredit the scientific consensus on climate change,” Leiserowitz says. That campaign, as his recent survey shows, has worked to a large extent.

Related: Can we develop immunity against fake news?

“In our last national survey, we found that only 15 percent of Americans understand that more than 90 percent of climate scientists are convinced that human-caused global warming is happening,” says Leiserowitz. There's “plenty of uncertainty” about exactly how climate change will play out in the coming years, Leiserowitz says, “but about the fundamentals that this is real, there is really almost no dispute whatsoever.”

But “this is not uncontested terrain,” Leiserowitz adds. “Other people and organizations out there continue to try to question [this].”

This reality was the backdrop for the recent study. Researchers wanted to know what happens when you expose people not just to the scientific consensus, but to one of the most powerful countermessages. “More specifically, is it possible to inoculate people against the effect of that disinformation,” Leiserowitz asks.

The researchers divided people into six different groups. A control group received no information arguing for or against climate change. A second group was given just the “consensus message.” As expected, opinions in this second group moved toward the consensus view by about 20 percentage points.

A third group was exposed to the Oregon Institute of Science and Medicine petition, one of the leading disinformation campaigns in the US. A biochemist named Arthur Robinson got 31,000 people to sign a petition saying they don't believe that global warming is happening. Robinson claimed — falsely — that all the signatories were scientists. When this group was exposed only to the petition, their estimate of the scientific consensus dropped by about 9 percentage points.

In the fourth group, the researchers presented the two messages side by side. When exposed both to the fact of the scientific consensus and to the disinformation, “essentially they canceled each other out,” Leiserowitz says.

The final two groups were “the heart of the study,” Leiserowitz explains.

One group was given a short "general inoculation.” “People were shown the consensus message ... and then were told that, while there is this consensus, some politically motivated groups use misleading tactics to try to convince the public there's a lot of disagreement. Then they were exposed to the disinformation.” In this scenario, people would move in a positive direction toward understanding the consensus by about a third of the typical 20 percentage points.

The last group was given a longer, "more detailed inoculation.” This moved people’s opinions about two-thirds of the way toward the 20 percent. “So, it is possible to essentially inoculate the mind against disinformation, which certainly has major implications for the larger issue we're all wrestling with around fake news,” Leiserowitz says.

Communicating a detailed inoculation message to the public is challenging, however. Americans are increasingly “fragmenting into ever finer-grained media sources, and some of them are echo chambers [that] have been constructed in a way to not trust any information that comes from outside the ‘trusted source,’” Leiserowitz points out.

That being said, over 70 percent of Americans are neither in a group that Leiserowitz would call “the alarmed,” which is fully convinced climate change is real and serious or in “the dismissive,” which thinks it is a hoax.

“Each of these groups is different. You need to reach them through sources that they trust and in language and concepts that matter to them,” he continues. “We know that, for example, many, many Americans think that climate change, if it's real, is distant. Distant in time — meaning the impacts won't be felt for a generation or more — or distant in space, [as in] ‘This is about polar bears or maybe some developing countries, but not the United States, not my state, not my city, or any of the people and places I care about.’”

“That's fundamentally also a big misunderstanding. In fact, climate change is here and now,” Leiserowitz emphasizes. “The impacts can be seen and felt all over the country. Likewise, many people don't recognize that the solutions to climate change are also here and now. So, bringing it literally down to Earth and recognizing that this is something in the here and now really helps to engage those groups.”