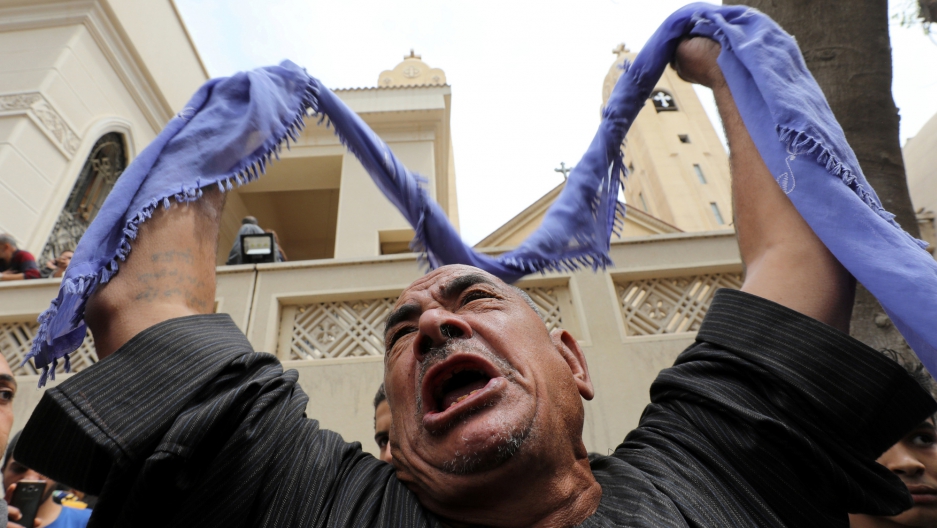 A relative of one of the victims reacts after a church explosion in Tanta, Egypt.

Bombings at two Egyptian churches killed more than 35 people as they gathered to mark Palm Sunday, officials said, in one of the deadliest recent attacks on the country's Coptic Christians.

The attacks on the Mar Girgis church in the city of Tanta north of Cairo and Saint Mark's Church in the coastal city of Alexandria came just weeks ahead of a visit by Pope Francis to show support for Egypt's large Christian minority.

Egyptian officials denounced the attack as an attempt to sow divisions in the country, while Francis sent his "deep condolences" to Coptic Christian Pope Tawadros II.

Egyptian Christians have repeatedly been targeted by ISIS. And on Sunday, the group claimed responsibilty for both bombings.

The first blast killed at least 25 people and wounded more than 70 when it hit the church in Nile Delta City of Tanta, about 75 miles north of Cairo, according to a health ministry toll.

Images broadcast by private television stations showed bloodstains smearing the whitewashed walls of the church next to shredded wooden benches.

"The explosion took place in the front rows, near the altar, during the mass," General Tarek Atiya, the deputy to Egypt's interior minister in charge of relations with the media, told AFP.

The worshipers had been celebrating Palm Sunday, one of the holiest days of the Christian calendar, marking the triumphant entrance of Jesus to Jerusalem.

The second blast killed at least 11 people and wounded 35 at the church in Alexandria, Egypt's second largest city, according to the health ministry.

Tawadros had been attending a mass at the church but a Coptic Church official said he had left before the blast.

Francis, who is due to visit Cairo on April 28-29, offered prayers for the victims.

"Let us pray for the victims of the attack unfortunately carried out today," he said in an Angelus prayer.

Copts, who make up about one tenth of Egypt's population of more than 92 million and who celebrate Easter next weekend, have been targeted by several attacks in recent months.

Jihadists and Islamists accuse Copts of supporting the military overthrow of Islamist President Mohamed Morsi in 2013, which ushered in a deadly crackdown on his supporters.

In December, a suicide bombing claimed by ISIS killed 29 worshipers during Sunday mass in Cairo.

The bombing of the church within a compound that also holds the seat of the Coptic papacy was the deadliest attack against the minority in recent memory.

A spate of jihadist-linked attacks in Egypt's restive Sinai Peninsula, including the murder of a Copt in the city of El Arish whose house was also burned, have led some Coptic families to flee their homes.

About 250 Christians took refuge in the Suez Canal city of Ismailiya after ISIS released a video in February calling for attacks on the religious minority.

Reacting before the second bombing in Alexandria, Egyptian Foreign Ministry spokesman Ahmed Abu Zeid called the attack in Tanta "a failed attempt against our unity."

The Cairo-based Al-Azhar, an influential Sunni Muslim authority, said it aimed to "destabilise security and ... the unity of Egyptians."

More than 40 churches were attacked nationwide in the two weeks after the deadly dispersal by security forces of two pro-Morsi protest camps in Cairo on August 14, 2013, Human Rights Watch said.

President Abdel Fattah al-Sisi, who as then army chief helped remove Morsi, has defended his security forces and accused jihadists of attacking Copts in order to divide the country.

In October 2011, almost 30 people — mostly Coptic Christians — were killed after the army charged at a protest outside the state television building in Cairo to denounce the torching of a church in southern Egypt.

In May that year, clashes between Muslims and Copts left 15 dead in the working-class Cairo neighborhood of Imbaba where two churches were attacked.

A few months earlier, the unclaimed bombing of a Coptic church killed more than 20 people in Egypt's second city of Alexandria on New Year's Day.