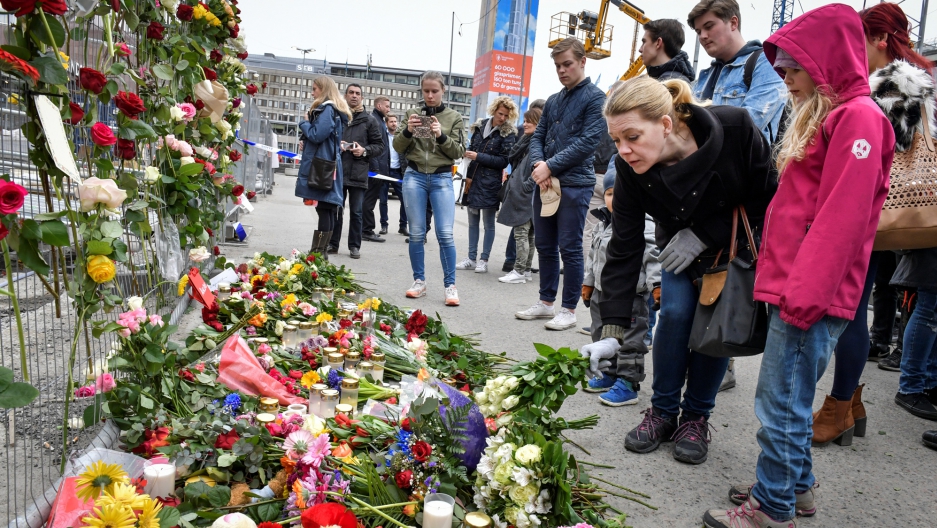 People gather at the crime scene near Ahlens department store in central Stockholm Saturday after a hijacked beer truck plowed into pedestrians.

Swedish police have arrested a 39-year-old man from Uzbekistan who they say is the alleged driver of a truck that plowed into a Stockholm crowd killing four in Europe's latest such terror attack.

Authorities on Saturday say they found a suspect device in the truck.

"We have found a device in the vehicle that doesn't belong there ... A technical examination is ongoing, we can't go into what it is right now ... whether it's a bomb or a flammable device," police chief Dan Eliasson told reporters.

Intelligence agency chief Anders Thornberg added that the Uzbek suspect "has appeared in our intelligence gathering in the past."

"There is nothing to indicate that we've got the wrong man. On the contrary, the suspicions have strengthened," Eliasson added.

Tow trucks pull away the beer truck that crashed into the department store Ahlens after plowing down the Drottninggatan Street in central Stockholm.

Flags flew at half-mast across Stockholm on Saturday as the city slowly returned to normal a day after the attack.

A stolen beer truck ploughed into a crowd of people at the corner of the bustling Ahlens department store and the Drottninggatan pedestrian street on Friday afternoon, above ground from Stockholm's central subway station.

Fifteen people were injured, nine of whom remained in hospital on Saturday.

It was the third terror attack in Europe in two weeks, coming on the heels of assaults in London and St. Petersburg, although there has been no immediate claim of responsibility.

Previous attacks using vehicles have occurred in London, Berlin and the southern French city of Nice, all of them claimed by ISIS.

Prime Minister Stefan Lofven, who said Sweden will hold a minute's silence on Monday in memory of the victims, has beefed up Sweden's border controls.

"Terrorists want us to be afraid, want us to change our behavior, want us to not live our lives normally but that is what we're going to do. So terrorists can never defeat Sweden, never," Lofven said.

City streets were empty early Saturday, slowly filling as the day wore on as things began to return to normal — apart from a heavy police presence, a rare scene in this normally tranquil country.

A swelling crowd milled by the security barrier erected around the scene, many placing flowers on the ground or in the security fence.

Sweden's Crown Princess Victoria, 39, was one of those laying down a bouquet, wiping tears from her cheek.

"I feel an incredible sadness, an emptiness," she told reporters. But she said: "Society has demonstrated enormous strength and we stand together against this."

The suspected driver was detained on Friday in Marsta, a suburb north of Stockholm.

Intelligence agency Sapo said meanwhile it was hunting for "possible accomplices or networks that may have been involved in the attack."

Witnesses described scenes of terror and panic on Friday.

"A massive truck starts driving ... and mangles everything and just drives over exactly everything," eyewitness Rikard Gauffin told AFP.

"It was so terrible and there were bodies lying everywhere ... it was really terrifying," he added.

An attack on Stockholm was just a matter of time, the head of the Centre for Asymmetric Threat Studies at the Swedish National Defence College, Magnus Ranstorp, told AFP.

"It was pretty expected, the police and intelligence agency have practiced for this several times the past year ... We just didn't know when it was going to happen," he said.

Friday's attack was the latest in a string of assaults with vehicles in Europe.

The deadliest came last year in France on the July 14 Bastille Day national holiday, when a man rammed a truck into a crowd in the Mediterranean resort of Nice, killing 86 people.

In December, a man hijacked a truck and slammed into shoppers at a Christmas market in Berlin, killing 12 people.

In London last month, Khalid Masood, a 52-year-old convert to Islam, killed five people when he drove a car at high speed into pedestrians before launching a frenzied knife attack on a policeman guarding parliament.

In 2014, ISIS called for attacks on citizens of Western countries and gave instructions on how they could be carried out without military equipment, using rocks or knives or by running people over in vehicles.

Friday's attack was the second terror attack in Stockholm.

In December 2010, a suicide bomber blew himself up, also on the Drottninggatan pedestrian street, lightly injuring several passersby.