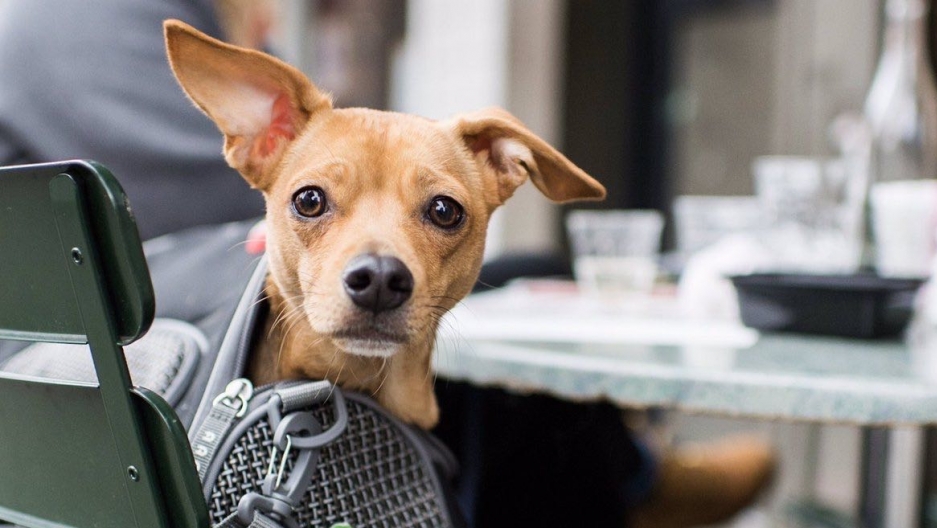 Archie, a chihuahua, is pictured here.

On a chilly recent morning, photographer Elias Weiss Friedman was camped out at the dog run in New York City’s Washington Square Park, preparing to shoot the compelling, eye-level portraits he’s best-known for.

Like any working photographer, he was dressed for his beat. “I'm wearing … cargo pants that I've destroyed about 15 pairs of,” he says. “But underneath, I have kneepads, and I wear them underneath because I don't like to give away that I'm — just a little bit more under the radar.”

Elsewhere on his person: “Squeaky toy, dog treats and obviously, a camera,” he says, adding that it’s “all sort of slobber-proof.” To that end: “I have lens wipes for dog slobber. I have a pen, and I have sunglasses.”

Riley, Australian Labradoodle (10 m/o), Central Park, New York, NY • "Her favorite thing to do is put balls under furniture and then bark so I have to get it for her. She thinks it's the funniest thing in the world."

Friedman is a dog photographer — or, more accurately, he’s the human behind the blog and online phenomenon The Dogist. The idea for the site ­came to him a few years ago, when he realized that there was nothing like Humans of New York or The Sartorialist for dogs. It was a glaring hole on the internet, he thought, and one that he could fill.

“I knew from day one that if I was consistent with it, that people would love it,” he says. “And I'm sitting here three years later, having photographed 15,000 dogs.”

For Friedman, a typical day of shooting revolves around the bathroom breaks of New York’s dogs. “So mornings, midday, and after work,” he says. “And in New York, I like to shoot on the weekends, because the owners are more likely to be with them instead of at work.”

Posts on The Dogist usually include a photo, along with the pup’s “name, breed, age, location, and something interesting about the dog — some story about them,” Friedman explains.

One recent image features a pouchy beagle, half-sitting on the damp pavement at 21st Street and Gramercy Park East and peering into the lens for his close-up. The caption identifies him as Ace, age “14ish,” and quotes his owner: “He had a pretty lousy life before this in a laboratory, but he loves food. He once stole a sandwich from a homeless guy.” The post has been favorited, liked and shared hundreds of times across The Dogist’s social media empire.

Ace, Beagle ("14ish" y/o), 21st & Gramercy Park East, New York, NY • "He had a pretty lousy life before this in a laboratory, but he loves food. He once stole a sandwich from a homeless guy."

Friedman has a few tips for owners looking to take Dogist-quality photos of their own canines. Firstly, he says, many people make the mistake of not getting down on their dog’s level, meaning “you get all these pictures from the iPhone level of the top of the dog's head.”

Shooting from lower down is "more impactful and compelling ... on their level, where it feels like they're bigger.”

When he meets a new dog for the first time, Friedman lets the dog smell him. “That's the way dogs sort of figure out who you are,” he adds. Then, he crouches down, positions his camera lens, and gives them a glimpse of “something they want, whether it’s a toy or a treat.”

To demonstrate, Friedman waves a tennis ball in front of his lens to attract the attention of Thatch, a terrier-mix rescue owned by Delaney Simmons of WNYC. As he photographs the dog, Friedman waves the ball, letting out a series of weird noises in addition — a little bark, a sputter, even a growl — to keep Thatch looking at the camera. The shutter clicks away.

When it’s all over, Friedman tosses Thatch a treat that he’s had in his hand all along — another surefire trick. “The nose knows,” he says.

“It's really that quick — because I got him to sit, he looked right at me.”