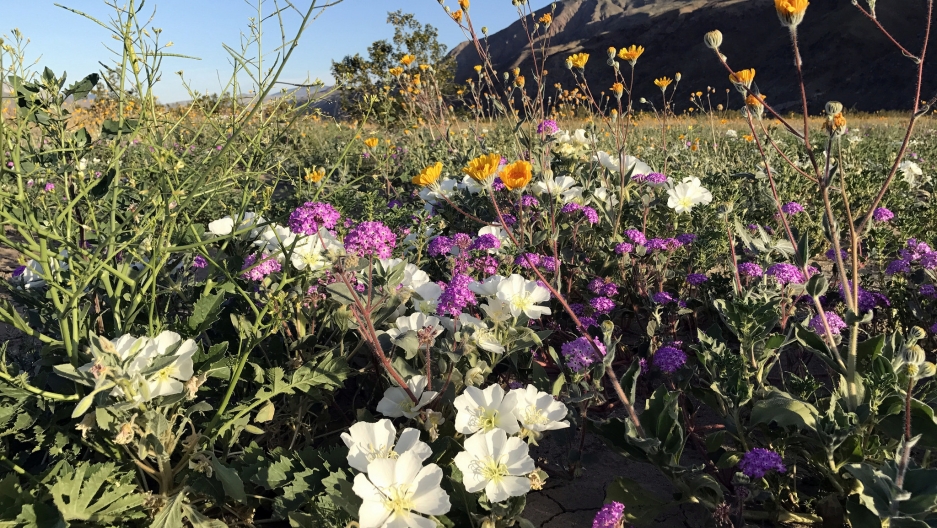 Despite winter’s scattered protests (like the blizzard that hit the Northeast in mid-March), spring has finally arrived in most parts of the United States. And with it: “The party is beginning,” says Andrea DeLong-Amaya, the director of horticulture at the Lady Bird Johnson Wildflower Center in Austin, Texas.

She’s talking about wildflowers, which are already blooming in bright bunches across the southern United States. “We have bluebonnets, they’re pretty much full on, our Texas state flower,” she says. “And then there's all kinds of other things — we have bitterweeds blooming and verbenas and coreopsis and a lot of Indian blanket. It looks really beautiful.”

In fact, wildflowers are pushing up all over the place — and in some areas, this year’s display is especially spectacular. In California’s Anza-Borrego Desert State Park, yellow desert dandelions, brittlebush, sunflowers and beavertail cactuses are splashing bright golds and pinks across the sand. After a wet winter, the whole region is experiencing a superbloom. “This year is just a lot of good storms, and the deserts remained wet for months. So the flowers are really outstanding,” says Richard Minnich, a professor of earth sciences at the University of California, Riverside.

The flowers won’t last too long — some patches in Anza-Borrego have already hit their peak. But there are a few ways you can get the most out of wildflower season, wherever you are. Take a photo, for one: not because it’ll last longer, but because the hive mind of the internet can help you identify the bloom you’re admiring.

“We crowdsource the identification process,” says Ken-ichi Ueda, the co-director of the website and app iNaturalist. Say “you’re out looking at wildflowers and you see something that totally blows your mind, and you just want to put a name on it, you can post on the website. And hopefully, someone who knows that area will help you out with the name.”

That’s not all — iNaturalist also shares data with scientific repositories, so your wildflower sightings can be used in research. “So if you're a scientist and you're studying desert blooms, you might be looking up occurrences of anytime anyone has seen [a] ghost flower,” Ueda explains.

And the app isn’t just for wildflowers. It can be used for any living thing in the wild, he says. “So if you see pollinators, if you see insects, you see hummingbirds, anything visiting the flowers are also fair game for observations.”

If photographing wildflowers isn’t enough, you can also plant some of your own. Just make sure that you’re using native seeds — Cheerios recently got flak for including some invasive species in wildflower seed packs it gave away to customers. The company said in a statement that the packs contained the same seed varieties available at major nationwide home stores.

For DeLong-Amaya, the incident underscores the need for aspiring wildflower sowers to do their own research and use native plants as often as possible. “When you have plants [that] really are not adapted to our area, they can contribute to the loss of habitat for native vegetation, which then has a trickle-down effect for wildlife, as well,” she says.

Hollis Woodard, an entomologist at the University of California, Riverside, agrees. She studies bees and says the United States is home to thousands of native bee species. “And they evolved here, and they visit all of these native flowering plants.” She suggests that flower lovers scope out resources like the Xerces Society, and the Lady Bird Johnson Wildflower Center.

DeLong-Amaya adds that most states have a local native plant society chapter that you can find online — they can often help you figure out where to get native seeds to plant yourself.

“I’ve found that they have been really helpful in helping to guide what is the best selection, but also a lot of them know where the resources are to get those plants,” she says. “So sometimes they have seed swaps and you might even be able to get some stuff for pretty cheap.”