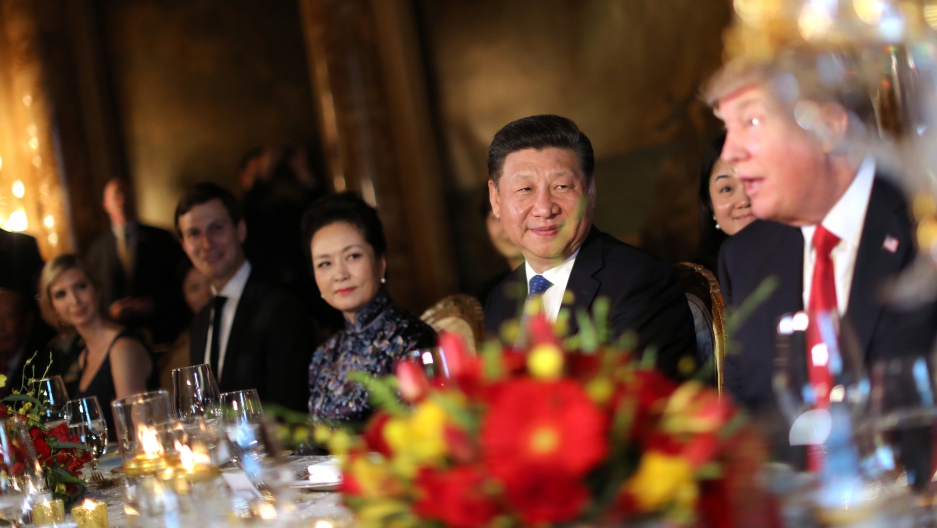 Chinese President Xi Jinping is pictured at a dinner hosted by US President Donald Trump at Trump's Mar-a-Lago estate in Florida on April 6, 2017

The White House announced the Thursday night menu at Mar-a-Lago. It would include pan-seared Dover sole with champagne sauce or dry aged prime New York strip steak. No mention of the 59 Tomahawk missiles that were served up around the same time.

"I would hope that for the sake of the US relationship with China, that they gave Beijing a fair heads up," says journalist and longime China-watcher Isaac Stone Fish, "and that [Chinese President] Xi Jinping didn't hear about it from an aide or read about it from CNN."

The attack, in response to what the Department of Defense says was a nerve gas attack on innocent Syrians, was a signal heard loud and clear in Damascus. But it could be heard in Beijing as well, not to mention the dining room in Trump's private golf club in Florida, which he likes to call the "Winter White House."

"I think the message that Trump was, hopefully, consciously trying to send to Xi was that if Beijing does not do more to push on North Korea, the United States is very comfortable working unilaterally," says Stone Fish, a senior fellow at the Asia Society's Center on US-China Relations.

Stone Fish says the Chinese will see Syria as a metaphor for North Korea. But it's an imperfect metaphor. "The big difference between Syria and North Korea is that, if the North Korean state collapses, and there's regime change or there's chaos, it's really China's responsibility to clean that up," says Stone Fish.

Earlier this month President Trump sent an unmistakable message to China about North Korea, without a metaphor. He told the Financial Times, "If China is not going to solve North Korea, we will."

"You hope that, strategically, the comments that [Trump] made to the Financial Times about North Korea — and the decision to bomb Syria — were linked," notes Stone Fish.

Many people are wondering if Trump was moved to action Thursday by pictures of dying Syrian victims, or whether he had been considering the strike on the Syrian airfield more strategically, with more forethought.

So much depends on one's preconceived notions of Trump. Was he impulsive or decisive? https://t.co/T3bNBoVRIS

"Trump said that he saw what happened to those children after the chemical attack, and that's why he decided to go in," says Stone Fish. "What one hopes is that he was thinking about this as a message to Beijing beforehand. And if so — and if that's how the Chinese read it — then I think that's a very aggressive message."

President Xi did not immediately react publicly to the US airstrike in Syria. But he will surely be taking Thursday night's military action into account as he sizes up the new US president.

"What Trump supporters had always said was that Trump was much more of a heavyweight once you gave him time, that he had a plan, that there was a method to this madness," observes Stone Fish, "and it's certainly possible that Xi is starting to subscribe to that theory."

.@FLOTUS & I are honored to welcome the President of the People's Republic of China, Xi Jinping, & Madame Peng Liyuan to the United States. pic.twitter.com/n6ZX4AySNH

"On the other hand, it's also certainly possible that, based on the way that Trump presented himself during those private discussions, that Xi confirmed that this is a president that he can walk all over," says Stone Fish, "and that Trump is going to make some symbolic announcements about trade deals — but that China has a much freer hand to work in the Pacific."