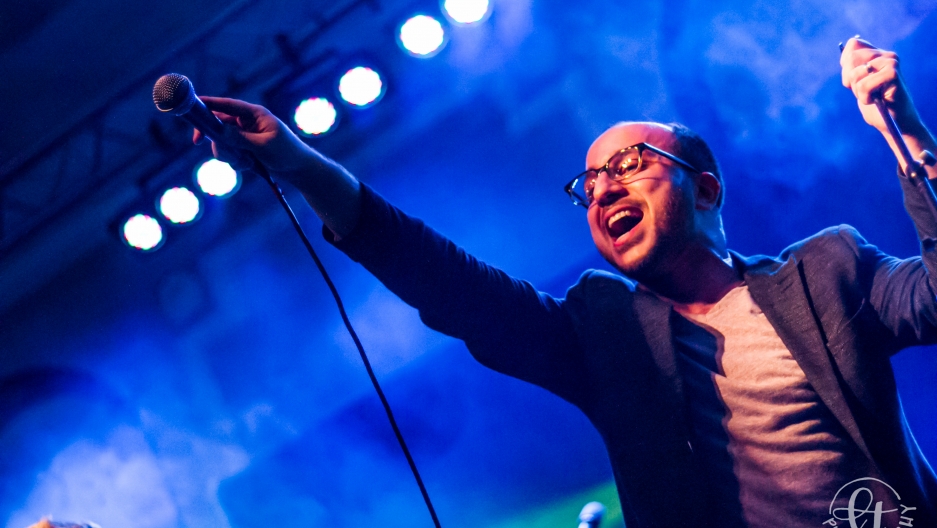 Bassel Almadani is pictured here onstage with The Supernaturals.

Syrian-American musician Bassel Almadani often travels into the heart of Trump country with what he says is a "humanitarian message."

Almadani, whose band The Supernaturals is based in Chicago, wants to show the human face of Syria to Americans who, in many cases, have never met a Syrian and encounter the country mainly through violent headlines.

Sometimes, during a pause in the show, he'll tell the audience his memories of visiting relatives in Syria when he was a kid.

"My early memories there are really fantastic," he says. "One of my earliest memories would be going to Syria and trying to speak to my cousins in English and wondering why they couldn't understand what I was saying."

Lately, Almadani has been gigging in churches and colleges in small-town America.

They tend to be intimate environments that yield interesting results. Take, for example, a recent stop in Wichita, Kansas.

"The most honest thing was them just really embracing the fact that the society itself was pretty separated — that they just weren't interacting," he recalls. "There are Syrian and Lebanese communities in their back door. There's a big presence of them actually in the city of Wichita."

One song The Supernaturals always perform is titled "Lost." It was inspired by the death of Almadani's cousin, who was killed trying to escape from Aleppo. This music on this track is "deeply personal," Almadani says. And with this week's news out of Syria, including an apparent Damascus-ordered chemical gas attack and the US missile strikes at an air base near Homs, he says he can't help but have a connection with his relatives still living there.