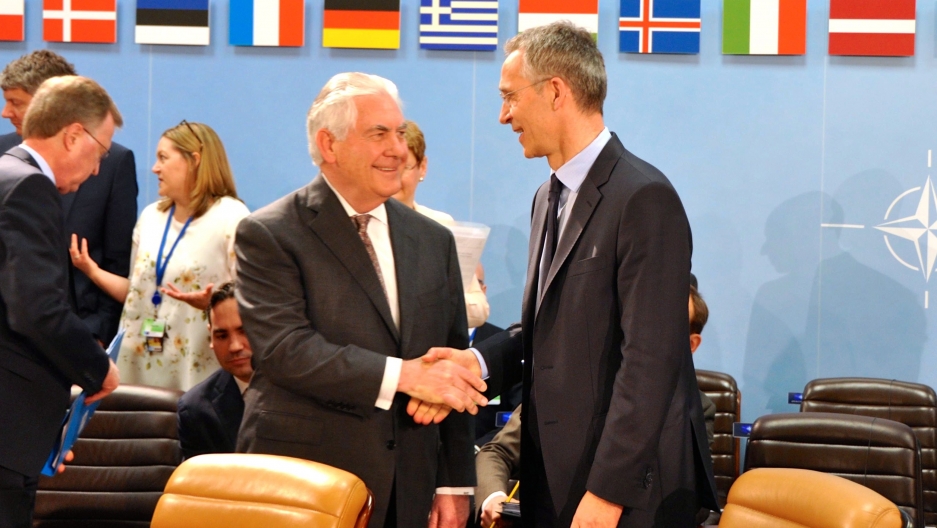 There are 119 closely watched senior roles at the State Department, only a few of which have been filled since President Donald Trump took office. All of the seats require Senate confirmation, and before that process can begin, the president must name people to fill them. At present, that list remains short by more than a hundred names.

Government staffing experts say the Trump administration has fallen behind schedule compared to the previous three presidents, and there’s a real chance it will continue to fall further behind. This is adding to existing uncertainty at State, which former Ambassador to Syria and Deputy Ambassador to Iraq Robert Ford believes is having an effect on US relations.

These days Ford is a senior fellow at the Middle East Institute, a nonpartisan think tank. He rattles off examples of what he's seen happen recently in Japan, Europe, and at a United Nations conference on the future of Syria. “The State Department had no high level representative after the first day of that meeting, and this is talking about Syria where we have over a thousand US combat forces about to be engaged,” Ford says. “We have daily US Air Force bombing missions. Wouldn't you think you'd want the State Department engaged at a high level about the political future of a country like that?”

Ford doesn’t believe the State Department will be without senior staff long-term, because that would leave career government employees without leadership. “If the purpose was to drain the swamp, to use the expression from the Trump campaign,” he says, “then you wouldn’t leave the creatures who have populated the swamps, the people in the bureaucracies, to run themselves.”

What’s less clear to the retired ambassador and other observers of US diplomacy is how this administration’s Middle East policy will differ from that of the last few presidents. “We don’t know a lot yet because as with a lot of other things this policy is under review,” says Associated Press Reporter Matt Lee, standing outside the State Department. “What we do know is that the center of Mideast diplomacy has shifted from the State Department to the White House.”

This shift is significant, if not entirely new. It’s been slowly moving in that direction over several presidencies. What is new is a secretary of state defending proposed cuts to the agency’s budget. Secretary Rex Tillerson is embracing the idea. “In a sharp shift from previous efforts to cut the budget, you may see Congress adding more money,” Lee says, “more than perhaps the secretary of state wants.”

President Trump’s proposed cuts to the State Department’s budget are unpopular with members of Congress from both parties, and also with military leaders. More than 120 retired admirals and generals have voiced opposition to the move, citing comments by current Secretary of Defense James Mattis back in 2013. “If you don’t fund the State Department fully then I need to buy more ammunition, ultimately, so I think it’s a cost benefit ratio,” Mattis told Congress. He was then the head of US Central Command.

Not all impacts are intentional. We asked Max Stier to help us better understand how uncertainty around staffing and funding at State could affect US relations and policy. He’s CEO of the nonpartisan Partnership for Public Service and an expert on government staffing and presidential transitions.

Stier says the empty positions don’t equal empty chairs, as existing agency staff fill vacant roles on a temporary basis. However, he believes there are consequences when a staffing delay drags on. “It’s a little bit like the substitute teacher. They may be an excellent educator but the fact that they’re temporary means that they are not perceived as having real authority,” he says, “and they themselves don’t look at the long-term requirements of the job that they’re performing.”

Stier says that has any number of implications for policy. “Also, it means that the White House ends up playing a bigger role, and typically a less well informed role, than what exists if you had the agencies that are most involved in national security and in foreign affairs represented at the table.”

Capacity is another issue. Stier says the White House simply isn’t large enough to handle the volume and diversity of issues that come up every day.

That doesn’t mean, however, that Stier believes all of the politically appointed positions at State must be filled, or that people must have government experience to do these jobs well. He says Secretary Tillerson is a prime example, as “the only member of the cabinet that ran a larger organization in his prior job running ExxonMobil than he is doing in government.”

But geopolitics don’t pause because resources, policies and staffing plans are under review in Washington.

“Any good military commander knows there’s got to be a plan for what happens after ISIS,” retired US Ambassador Robert Ford offers as an example, “but if you ask what’s the plan for government and management of local infrastructure, schools, water, hospitals, electricity, they don’t have an answer.” These are things the State Department typically has a very large role in. Ford says lingering uncertainty at the agency as coalition forces close in on ISIS strongholds creates a number of complications and risks.