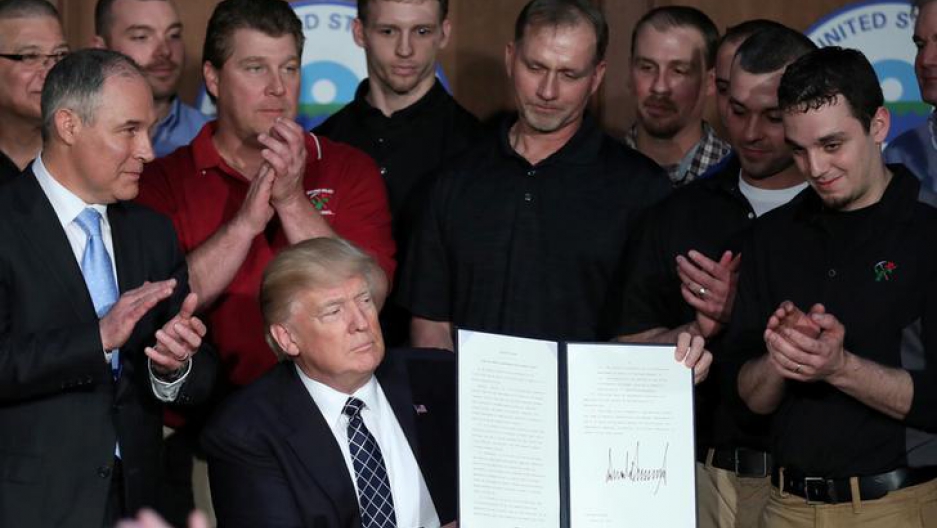 President Donald Trump holds up a signed executive order that he promises will bring thousands of jobs back to the coal mining industry as part of his plans to undo Obama-era climate change regulations. Here, miners surround him at a signing ceremony at the Environmental Protection Agency in Washington, DC, on March 28, 2017.

#73. @realDonaldTrump, with new coal jobs on the horizon, what will you do to keep miners safe? #100Days100Qs

“We love our coal miners.”

This is the message President Donald Trump communicated last week, as he signed an executive order that he says will bring jobs back to the mining industry by scaling down Barack Obama-era environmental regulations.

Recalling the interactions he has had with miners from across the country during his campaign and since he took office, Trump said he knew all about the struggles that they have endured. Mines have been shuttered in recent years, resulting in dwindling job prospects for those wanting to get back to their old line of work.

In painting such a simple picture, however, Trump is overlooking one important fact: Coal mining has been ranked among the most dangerous jobs in the United States.

Drawing on Bureau of Labor Statistics data from 2010, CNN pointed out in 2011 that exposure to methane gases and the possibility of explosions made coal mining an inherently dangerous profession, with 39 out of every 100,000 workers expected to die or suffer fatal injuries while on the job.

CNN explains further that while coal mining fatalities have historically been much higher — in the 20th century, the US government passed a flurry of laws and regulations in response to the dangerous conditions miners faced at work — it is likely that there are fewer casualties in mining today simply because there are now fewer miners than in the past.

In reality, Trump is likely to face some serious hurdles as he tries to put miners back to work.

Digging the earth for coal simply isn’t what it used to be. Today, mining jobs — like jobs in a slew of other industries — are increasingly performed by machines. Meanwhile, natural gas, along with wind and solar power, are taking up a larger chunk of the energy production landscape in the US and around the world, as both environmental protection standards and consumer demand lean toward clean energy alternatives.

Even Trump’s supporters are dubious about the president's claim that his energy policy will create coal jobs.

“I really don’t think that there’s going to be that many more jobs created, but I do think it’ll stabilize,” Tony Brunsak, a miner who is pro-Trump told PRI in response to Trump’s executive order.

But if Trump does put Americans back in the mines, it is worth knowing how he will protect them from the dangers of their work.

The Upper Big Branch mine disaster, in which an explosion killed 29 workers at a mine in West Virginia on April 5, 2010, and resulted in the largest settlement ever paid in relation to a mining accident in the US, offers a stark reminder about the dangers of extracting coal.

Mr. President, you say you “love our coal miners.” If you are successful in putting them back to work, will you consider creating additional regulations to ensure their safety on the job?