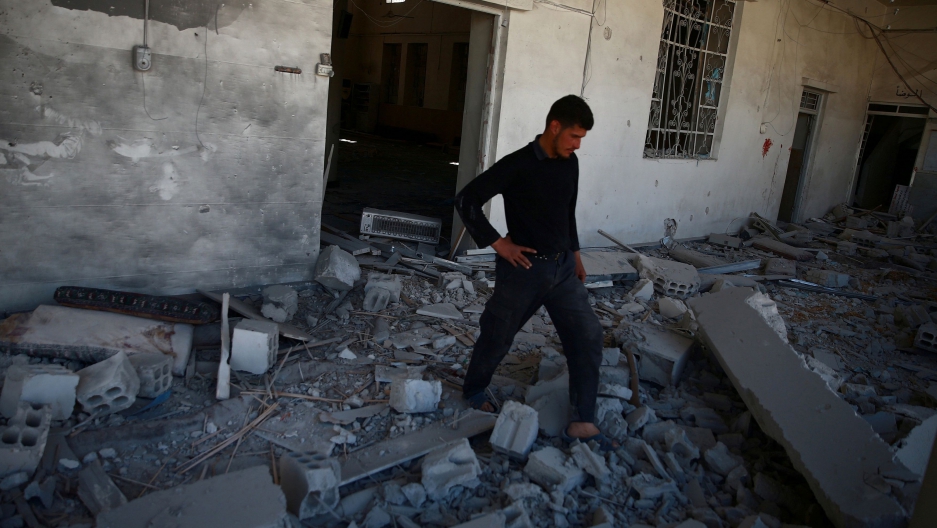 A man walks on the rubble of a damaged mosque after airstrikes in the rebel-held, besieged Douma neighborhood of Damascus, Syria, on April 4, 2017.

A day after a suspected chemical attack killed scores of people in Syria, a major conference on the fate of the war-wracked country opened in Brussels.

"Supporting the Future of Syria and the Region" is focused on the rebuilding of Syria, an agenda some say may not be possible under the current regime, which is unlikely to change anytime soon.

Earlier this week, President Donald Trump signaled a pivot in American policy on Syria, saying that ousting Syrian President Bashar al-Assad is not a focus for the United States. The White House did, however, strongly condemn Tuesday's attack, and laid blame for the spiraling violence on Assad and former President Barack Obama, who took little action when Syria crossed his "red line" on chemical weapons back in 2013.

Related: 'Shocking' video shows alleged chemical attack in Syria. But will it have an impact?

Six years into this brutal war that has left hundreds of thousands dead and millions displaced, what can the international community accomplish at the Brussels conference? Robert Ford, former US ambassador to Syria from 2011 to 2014 and currently a senior fellow at the Middle East Institute, says Syria can’t be rebuilt until the civil war has ended.

“In order for reconstruction to begin, you have to have security, and with the exception of the inner city of Damascus, for example, most parts of the country still do not have security in the way we would understand it,” Ford says. “There isn’t going to be any reconstruction in the immediate future — there’s still too much fighting going on.”

When it comes to rebuilding Syria, Ford draws a comparison to Iraq: The United States invested tens of billions of dollars to rebuild Iraq starting in 2004, but the effort was largely unsuccessful because conflict continued on. As it stands right now, Ford says, early estimates from the World Bank suggest that it will cost more than $300 billion to rebuild Syria, and he argues that Assad simply doesn’t care about reconstructing the entire nation.

“A man who repeatedly uses chemical weapons against civilians is not particularly concerned about their economic welfare, whether their health clinics are rebuilt or if their schools are reopened,” he says. “I think he will be interested in perhaps rebuilding some of the inner cities of eastern Syria, which are in a sense [the areas of] his political base, his political stronghold along the Mediterranean coast. The rest of the country, frankly, he doesn’t care that much about, and he doesn’t control it anyway and he’s not likely to control it anytime soon.”

Though Trump came out on Wednesday to call this week’s attack in Syria “an affront to humanity” that “cannot be tolerated,” Ford thinks that the US administration is largely unfazed by the conflict.

Ford adds that in order to stop recruitment to groups like ISIS, the broader conflict in Syria must be addressed. But, he argues, the United States is now largely absent from international negotiations on Syria.

“People like the United Nations envoy, a very talented diplomat named Staffan de Mistura, keep saying publicly, ‘Where are the Americans?’” says Ford. “But I don’t think the Trump administration wants to get involved, and they certainly don’t want to spend any money on the Syrian civil war, much less on the reconstruction.”

Related: The US bombs ISIS every day. Shouldn't the State Dept be at more Syria meetings?

With the focus on bombings, chemical weapons and the refugee crisis, there is little notice of the Assad regime's individual abuses. But an exposé in The Washington Post reported by Louisa Loveluck reveals the Syrian government’s systematic torture of military detainees.

“We decided to look at what’s happening inside Syria’s army hospitals — these are the facilities that really sit at the heart of what has become an industrialized system of torture,” says Loveluck. “What we found was really quite chilling.”

According to Loveluck, the state bureaucracy has been brought in to serve the regime’s "torture machine.” Doctors withhold lifesaving treatments and regularly abuse patients.

“The Syrian government, in its own paper trail, shows that these hospitals are places where dead detainees nationwide are brought to be catalogued often in an incredibly methodical way and then trucked away for mass burial,” she says. “When you go through the Syrian government’s own paper trail, it shows they were issuing orders which acknowledge the upsurge in deaths — they acknowledge that there was such a spike in the number of dead bodies coming out of detention facilities, coming out of these interrogations, that there had to be a system.”

The system, Loveluck says, was put in place to establish “judicial immunity” to state actors who have participated in these war crimes.

“I think the most interesting thing about this documentation is that if you read between the lines, there’s an acceptance of the surge in the death rate,” she says. “The reason these hospitals are important from a legal point of view is because they’re also still in service for the treatment of military personnel. That means that places where leading figures in the army have strolled around often passed back loads of fridges filled with dead bodies.”

Under international law, Loveluck says there is something known as “command responsibility,” which dictates that individuals in positions of power can be held criminally liable for abuses that take place on their watch, if they’re in a position to stop them.

“At this stage, there is absolutely no plausible argument that many crimes lawyers can see that they could not have been aware of the systematic and industrialized torture that was going on during their watch,” she says.

Related: This refugee camp in Jordan has turned into a frontier town for Syrians escaping war