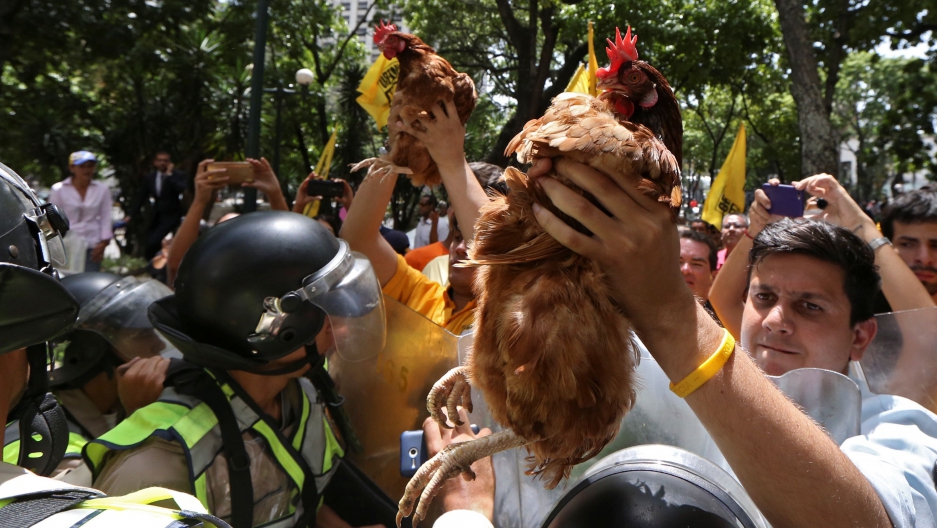 Opposition supporters carry chickens as they clash with riot police during a protest outside the offices of the Venezuela's ombudsman in Caracas, Venezuela, on April 3, 2017.

Men with sticks and rocks attacked Venezuelan opposition lawmakers who were protesting on Monday, as their country's political crisis continued to deepen. The legislators, their faces bloodied by the blows, were demanding the removal of Venezuela's Supreme Court judges.

The violence followed last Thursday's move by the Supreme Court to seize power from the National Assembly, effectively dissolving the elected legislature and the only branch of government not controlled by loyalists of President Nicolas Maduro. That triggered an outcry in Venezuela and around the world — and it even led one of Maduro's most prominent officials to break ranks by calling the ruling unconstitutional.

Under all the pressure, Maduro and the top court on Saturday walked back the attempt to strip power from congress.

But the crisis is not over. To Venezuelan government critics, the case was clear: They said judges loyal to the president attempted to set the stage for one-man rule, at a time of a growing humanitarian crisis with shortages of basics like food and medicine.

Carolina Acosta-Alzuru, a journalism professor at the University of Georgia and a native of Venezuela, is deeply concerned about the chaos in her homeland.

“From a personal perspective I’m extremely worried because my whole family is there and my friends [are there],” she says. “It’s my country and I love it dearly. From an academic perspective, I’m also very worried — the government of Nicolas Maduro has become increasingly authoritarian.”

Acosta-Alzuru argues that the Maduro administration appears to determined to never hold elections again. The government has also violently quashed protester dissent, and detained scores of political prisoners without trials.

“[The elections] have just been postponed by the government because they know they will lose the election, so they’re not going to hold elections,” Acosta-Alzuru says, adding that the move by the Venezuelan Supreme Court to strip the nation’s congress of its governing power was unconstitutional.

Though Maduro was elected with a message tied to President Hugo Chávez, Acosta-Alzuru says that Maduro’s approval ratings continue to fall below Chávez, who she says “planted the seeds of this storm.”

“But these are two very different characters,” she says. “[Maduro] has included the military in the government — you see many more posts, governmental posts, that are in military hands than you used to see in the Chávez government, or ever before.”

Right now, Acosta-Alzuru says that the social and economic situation is stark in Venezuela as hunger and crime continue to soar, something that the military is contributing to: The Venezuelan military is profiting from people going hungry.

“All this has shown even more the differences between the haves and the have nots,” she says. “The ‘haves’ have the opportunity to buy things on the black market, at black market prices, and my family would belong to that [group]. The ‘have nots’ are in line endlessly to buy staples that they may or may not find — they stand on line to buy whatever they can find.”

Though her family is able to buy goods and household items on the black market, Acosta-Alzuru says her relatives have asked her to bring some necessary items to the country when she makes an upcoming trip to Venezuela.

“I can tell you [what’s on] the list: It includes rice, sugar, coffee, flour, cooking oil, which I don’t know how I’m going to take, soap, dishwashing soap, toothpaste, and of course medicines that here are so basic — aspirin, acetaminophen, or ibuprofen, you can’t find them there,” she says. “That’s the situation.”