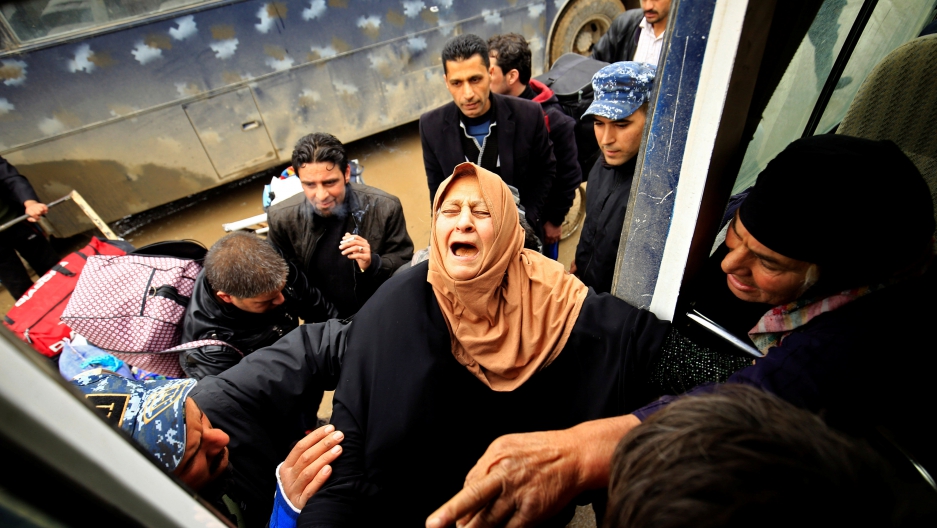 A displaced Iraqi woman reacts as she is transferred to a safe area during a battle between Iraqi forces and ISIS militants, in Mosul, Iraq, March 17, 2017.

ISIS seems to be arranging for residents in Mosul to be struck and killed by US-led coalition airstrikes, in order to boost civilian death counts and to create controversy around the coalition campaign.

The militant group has a long history of forcing civilians to serve as human shields — to ward off airstrikes. But in recent weeks ISIS has reportedly been placing Mosul residents at military locations, secretly, and then inviting airstrikes.

"They're trying to sneak civilians into locations so that we're not aware of them," says US Army Col. Joe Scrocca, "and then they begin an engagement with the Iraqi security forces."

Scrocca, who is a spokesperson for the coalition's Combined Joint Task Force in Iraq, says "ISIS's purpose is to attack the strength of the coalition — our support back in our homelands. They are trying to ensure that the coalition is condemned for their actions, so that they can carry on."

This new tactic may have led to the deaths of hundreds of civilians on March 17, one of the deadliest days in Mosul since the campaign to liberate the city began. While the US Department of Defense counts 61 civilians killed, the airstrike tracking organization Airwars estimates "as many as 230 or even 520 civilians were killed in a catastrophic event at al Jadida (New Mosul)."

Journalist Patrick Osgood wrote in Iraq Oil Report that ISIS members forced around 200 civilians to move into a large cellar that stretched under several buildings in the New Mosul neighborhood. A building above them collapsed when the coalition struck a nearby target.

While the cause of the collapse remains under investigation, initial reports point to an ISIS truck bomb exploding when coalition planes hit a target next door. "The bodies are still being dug out of the rubble," Osgood says, "several weeks later."

"Before this large mass casualty incident," Osgood says, "we were already getting reports of ISIS militants suddenly turning up, asking residents to smash holes in the walls of their homes so that they could move house to house without being detected."

Osgood, who has been reporting in Iraq since 2012, is in touch with a network of underground informants in Mosul. He heard multiple reports before the March 17 strike that ISIS had been corralling people and confining them to buildings, then attempting to draw coalition fire by shooting at helicopters and other coalition aircraft overhead — "not in the expectation that they would be able to shoot down aircraft," Osgood says, "but to actively goad the Iraqi and coalition forces into targeting the house and killing those civilians."

Related: ‘I saw everything burning’: Iraqi survivors of a suspected US coalition airstrike speak

Scrocca says that keeping civilians safe is as important to the coalition as defeating ISIS.

"Where we came from, was no water or food, just fighting. Where we're going, no future." #Mosul https://t.co/eJrNgAT2jK by @EdouardGuihaire

Iraqis living under ISIS control in these parts of Mosul are in a desperate position.

"This is a beggared, weaponless civilian population absolutely living in extremis," Osgood says, "and if they don't do what ISIS tells them to do, then they will be shot."

A lack of food has also driven many residents to cooperate with ISIS, just to be able to feed their families. In some cases, ISIS has used the promise of food to lure hungry Iraqis to locations where the militants intend to use them as human shields.

Osgood says these Iraqis face "a whole series of invidious choices" in Mosul.

"Whole families [must] decide whether to stay, to shelter in these basements," he says, "or [to] take the risk at night — as many of them do — to run through the front line past ISIS snipers [and] hope that they won't be mistaken for ISIS fighters ... and try to make it out to the other side."

"In doing so," Osgood says, "they lose everything. So they only have bad choices, and I feel terrible for them. There's no good option for them inside Mosul, and there are still perhaps 400,000 of them facing these choices every day as this conflict grinds on."