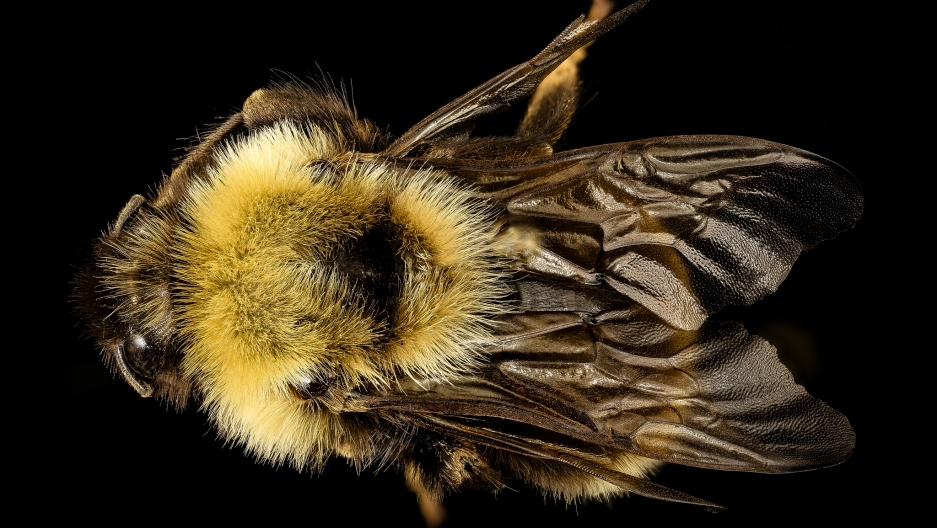 Recently, researchers at Queen Mary University of London trained a group of buff-tailed bumblebees (Bombus terrestris) to get little balls into goals — in a soccer-like game — in exchange for sweet treats.

It’s not the first time bees have flexed their mental muscle in the lab. In addition to learning games, bees can also recognize human faces in photographs, count to four, and solve computer science’s famous “traveling salesman” problem.

“All too often, people will assume that because a bee’s brain is little, which it undoubtedly is — it's no larger than perhaps a pinhead — that it might, therefore, be simple or not complex,” says Lars Chittka, a professor of sensory and behavioral ecology at Queen Mary University of London, and one of the soccer study’s co-authors. (He also co-authored the “traveling salesman” study.)

But he explains that while bees pack just a million neurons into their tiny brains, each one may be as complex in structure as a fully grown oak tree. What’s more, bee neurons are extraordinarily networked: “A single one of these nerve cells might make contact with perhaps 10,000 or 100,000 other cells in that same brain.”

“So, it's a long way from being a simple brain, but perhaps it's simpler than obviously a human brain with its 85 billion neurons,” he says. “And so, therefore, we’re hoping that we can use bees as a shortcut to understand integrative brain function and multitasking.”

In the soccer study, researchers trained a group of bees to use balls as tools or tokens to get a sugary reward, Chittka explains. “And the same way that you use perhaps a token to put in a vending machine in order to obtain a sugary sweet bar or something like that, they had to learn to move that ball from a particular destination to a goal.”

Then, a second group of “observer” bees watched the trained bees steer the ball in exchange for a treat and soon learned how to play the game themselves. They even figured out a more efficient way to win, using a technique that wasn’t available to the first group of bees.

For Chittka, the remarkable part about the “soccer bee” experiments isn’t that the bumblebees learned to push past obstacles to get a reward — he says they do that already, in complex flowers like snapdragons.

“But in this case, they really had to have the flexibility to move an object from A to B,” he explains. “What was even more remarkable is the way in which uninformed individuals that had no prior exposure to this task learned it from their sisters.”

To Chittka and his colleagues, that kind of cognitive flexibility could bode well for bees’ ability to adapt their behaviors under ecological pressure. But as bee researchers caution, flexibility and intelligence aren’t precisely the same thing.

“As humans, we tend to think of intelligence in very human terms,” says Felicity Muth, a postdoctoral fellow at the University of Nevada, Reno, whose work also focuses on bumblebees. “But of course, every animal’s cognition is just evolved to deal with the situation that the animal has to deal with. … So, I think what this shows here, is a kind of very specific form of cognition that bees use in their natural environment.”

In fact, bees may not even be the smartest insects in the animal kingdom — just some of the best-studied ones. Muth points out that humans have long had a close relationship with bees, and they also make great lab subjects. “They're endlessly motivated to partake in experiments, and they have all these interesting cognitive abilities that makes them really rewarding to work with,” she says.

Chittka also says that some species of wasps can recognize others in their colony by their individual facial features. And some solitary wasps keep multiple nests at a time, remembering the locations of all of them. “So, there's probably plenty of intelligence in other insects that has been poorly explored.”

But for now, there’s a lot more Chittka wants to uncover about the secret smarts of bees. “One of the things that we are extremely curious about … is how can such a little brain juggle so many tasks and learn so many things and store so much information?”

Now, he says, his team is working with skilled technicians to model the bee brain, exploring how bees can get so much done with their minimal circuitry. Depending on what Chittka and other researchers learn, lessons from tiny bee brains could have outsized applications.

“One reason why we study bees — and we actually have quite a bit of funding from an engineering research council at the moment — [is] because of the obvious question of how can you navigate reliably over long distance with essentially zero percent errors, by using such a tiny microcomputer as a bee has?”

“So, I imagine you could steer a jumbo jet from start to finish with a computer as 'large' as a bee brain.”