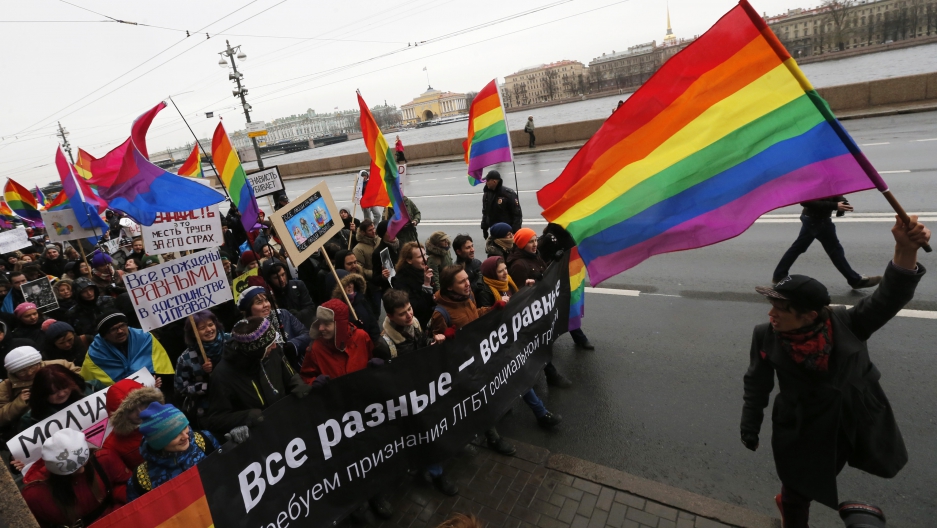 St.Petersburg, Russia
Gay activists take part in a protest event called "March against Hatred" in St. Petersburg November 2, 2014. The activists are marching in opposition towards the aggressive Russian government policy due to the war in Ukraine. (RUSSIA - Tags: CIVIL UNREST POLITICS)
Credit:

More than 100 gay men in Chechnya have been arrested and tortured, and some were killed by police, a local report says.

The abuses were first publicized in the Russian newspaper Novaya Gazeta, says Natalia Antelava, editor-in-chief of Cody Story. She says they probably stemmed from LGBT activists' request to have a gay parade in the region.

"There has been a very strong outcry in recent days across the North Caucasus because a Russia LGBT group has applied for permission to hold a gay parade in the cities across the North Caucasus," Antelava says. "They were denied, of course, because gay parades are not allowed in Russia. But it seems to have resulted in this witch hunt on gay men."

Authorities in Chechnya have denied the arrests and the killings. According to the Russian news agency Interfax, a spokesman for Chechnya’s leader said, “You cannot detain and persecute people who simply do not exist in the republic.”

Russian LGBT activist Svetlana Zahariova says it's very difficult to get information from the region, which is more repressive than other parts of Russia.

"It's a huge stigma to be an LGBT person and basically in Chechnya there are no LGBT communities because it is too dangerous to talk about sexual orientation," she says.

Zaharova says her group has set up a hotline and also spoken to civil rights groups in Chechnya to confirm the arrests and killings there. The group is also trying to get gay residents out of the area, but will not discuss any specifics.

"Right now we don't talk about concrete separate cases for security reasons, because we care about people who have managed to escape or can still escape," she says. "They are afraid they will be killed, or their friends are missing and they don't know where they are."

In 2013, President Vladimir Putin's government passed a law banning "gay propaganda," making it illegal for gay groups to hold public events and marches. Since that time, says Antelava, Russian state media has waged a major campaign against the LGBT community.

"Leading politicians in Russia are openly calling for violence against gays," she says. And the law "has emboldened various groups to go and hunt gay men and women in Russia."

The campaign is part of Putin's effort to maintain his popularity, she says, and to find a common enemy to rally around.

"He has very much positioned himself as a protector of family values, not just in Russia but the region and the world," Antelava says. "As a result, this entire region has become much more dangerous to be gay."