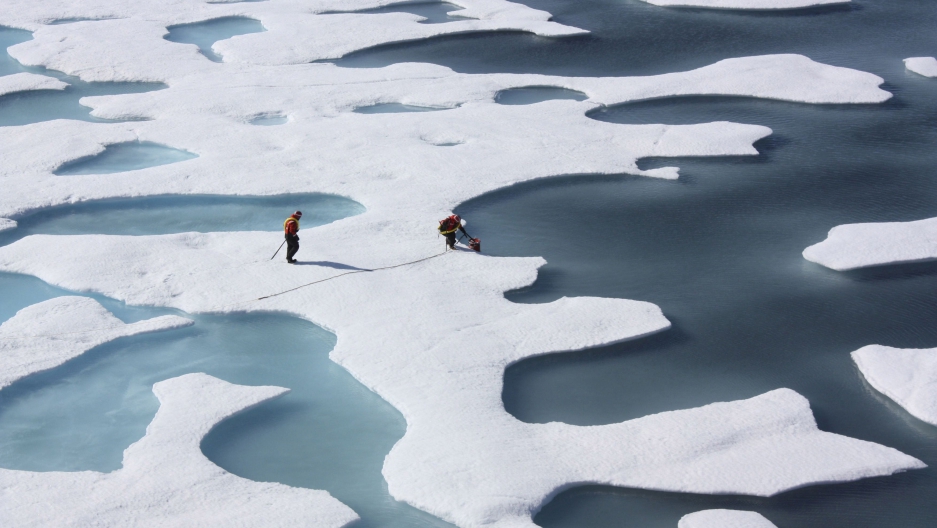 The crew of the US Coast Guard Cutter Healy, in the midst of their ICESCAPE mission, retrieves supplies in the Arctic Ocean on July 12, 2011.

#71. @realDonaldTrump, why are scientists finding their research suddenly being censored by the government?

Convincing the public about the threat of climate change is hard enough as it is, but what happens when climate scientists don't even have the numbers to prove it?

Victoria Herrmann is the managing director of The Arctic Institute, a Gates Scholar at the University of Cambridge and a National Geographic Explorer. She says that research is melting away as fast as the polar ice caps, but not because of a natural phenomenon. This change, according to Herrmann, is man-made.

“In the hours after [President Donald Trump’s] inauguration, the content manager of our website sent me a frantic email saying that we had a number of broken links on the website,” she says. “I had to go back and see what those were — they were some of the most important policies that the United States has of the Arctic, and they were all housed on the Obama administration’s website, and all of those went defunct in January.”

This is at a time when scientists are making alarming findings. Just last month, for example, the amount of sea ice cover in both the Arctic and the Antarctic reached new record lows for March — meaning the smallest polar ice caps in at least the 38 years of satellite records.

Though it should be expected that some links will not work when the White House changes hands, Herrmann says there’s currently nothing about the Arctic on Trump administration sites. In addition to data, she says that links to scientific research projects that are often used in education portals have disappeared.

“At first, the distress flare of lost data came as a surge of defunct links on 21 January,” she wrote in a recent piece for The Guardian. “Since January, the surge has transformed into a slow, incessant march of deleting datasets, webpages and policies about the Arctic. I now come to expect a weekly email request to replace invalid citations, hoping that someone had the foresight to download statistics about Arctic permafrost thaw or renewable energy in advance of the purge.”

Related: What lessons can Canada offer the US on the suppression of scientific research?

With that in mind, we’re wondering: Mr. President, why are scientists finding their research suddenly being censored by the government? If you’d like an answer to that question too, click here to ask the president in a tweet.