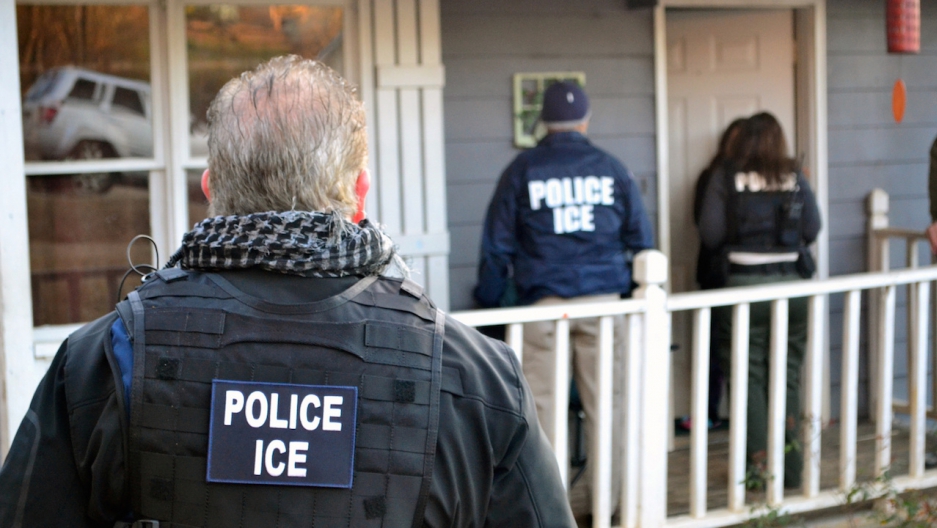 Courtesy of Bryan Cox/US Immigration and Customs Enforcement via Reuters

Recently, 27 members of a group calling itself the Maryland Chinese American Network showed up at a hearing in Annapolis, Maryland. They were there to testify against a bill that would make Maryland a so-called sanctuary state.

The bill would, among other things, prohibit jails from holding people for immigration reasons unless there’s a warrant.

Cheng Tu, the group's main organizer, explains that most in the Chinese American group had never spoken publicly before. But sanctuary laws angered them, Tu says, in part because they came here as legal immigrants.

Tu says sanctuary measures send a message to those immigrants who have followed the law in the US that, "Oh, it doesn’t matter any more."

Like most in his group, Tu came to the US in the 1990s as a graduate student. He stayed for an engineering job and now owns a consulting firm. Tu says one of his group’s greatest fears is that sanctuary laws will attract criminal immigrants. Those fears were stoked even more this month after two undocumented immigrants were charged with the alleged rape of a Maryland high school student.

But the Chinese American group’s harsh comments about immigrants don’t sit well with some.

"I’m startled," said Debbie Chen, who came to the US from Taiwan when she was 2. She brought statistics to a hearing on the Maryland state sanctuary bill that showed crime levels have dropped in parts of the state with sanctuary policies. "Just listening to the testimony, you’d think we were in midst of some kind of major crime wave," Chen said at the hearing.

A few days later at a restaurant, Chen says she decided to speak at the hearing when she realized the opposition group would be there, "to show that there were other Asian Americans, Chinese Americans who were for the bill."

Jim Huang also got angry during one of the public forums. His parents came to the US in the 1990s as students, just like those in the group opposing sanctuary. Chinese students got special treatment at that time, he says. After the deadly Tiananmen Square protests, the US made it easy for many of them to stay in the country and work. "And to have the same people then come out and say a proposed law is somehow providing special privileges to people who didn’t start with the same privileges that they had was really enraging."

But Tu says not everyone in his group benefitted from special treatment. And, he does think undocumented people in the US should have a path to citizenship. But sanctuary policies, he says, just undermine the rule of law. "We know how lawlessness can bring down a country," he says. "Cultural revolution ... 20 million people died because there’s no law. Just Chairman Mao says something and then people die. The rule of law. We don’t want that to be weakened."

Some Republicans, meanwhile, are delighted to see the Chinese American group oppose sanctuary laws. A Maryland Republican committee featured a picture of the group on its website.

For Tu what’s more important is that his community is taking a stand in local politics for the first time. "We’re very proud that we did this," he says. "We are Americans and we are going to use our civic duties very well from now on."