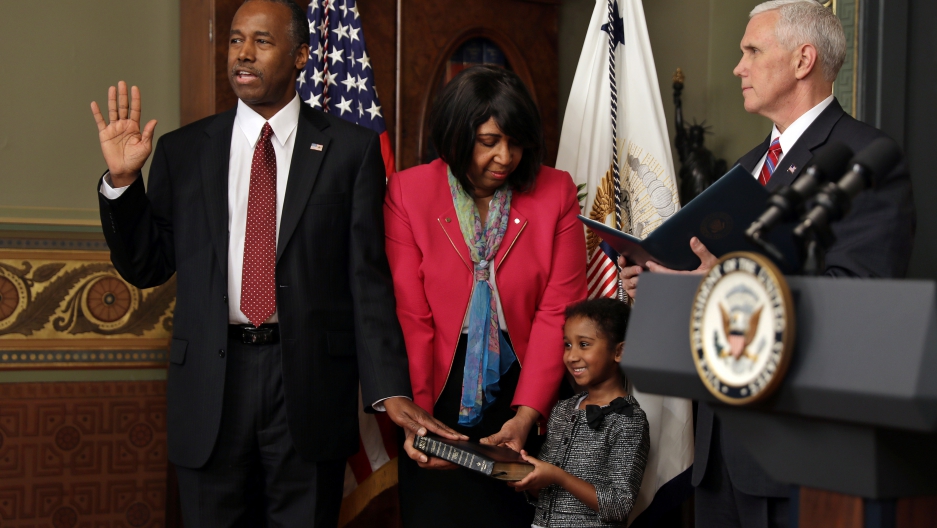 The new secretary of the Department of Housing and Urban, Ben Carson, is shown here being sworn in by US Vice President Mike Pence (R) as his wife, Candy, and granddaughter, Tesora, hold onto a bible during a ceremony at the Executive Office in Washington, on March 2, 2017.

#72. @realDonaldTrump, what kind of housing secretary will Ben Carson be — one in favor of cuts or new ideas? #100Days100Qs

Detroit native and former Republican presidential candidate Ben Carson, a retired neurosurgeon, is the new secretary of the Housing and Urban Development agency. His nomination drew plenty of skepticism from housing advocates who say that he wants to slash the agency’s budget and eliminate programs aimed at desegregation, a central part of HUD's mission.

Carson has flip-flopped a little. During his confirmation hearings, he said that the agency doesn't need so many programs. He claimed that some HUD initiatives are inefficient. Also, he maintained that there should be a limit on how much public housing the government provides. Rather, he has a "pull yourself up by the bootstraps" mentality.

He told the Dallas Morning News recently: "We're not just looking at putting a roof over someone's head; we're looking at developing our human capital," he said. "Instead of a maintenance organization, we're now becoming an organization that propels people to success."

He wants to get people out of public housing, and claims that they are more successful when they’re not dependent on the federal government.

During his presidential bid, Carson criticized HUD's $47 billion budget — calling it wasteful — and he was vocal about his opposition to an Obama-era mandate for communities to come up with ways to work together to end discrimination. Yet, during questioning at his confirmation hearing, Carson couldn’t name any specific HUD programs he would cut.

Likewise, when asked by senators about certain initiatives that benefit their constituents — rental assistance, for one — Carson pledged to keep that going along with a community-led block grant that will help people with lead removal and those who live in flood-prone areas.

Carson has called for budget cuts, citing the $20 trillion debt, but he's also said he wants to go on a listening tour to hear how HUD can be improved. So, where does he stand? If you'd like to get an answer to this, too, tweet your question here.