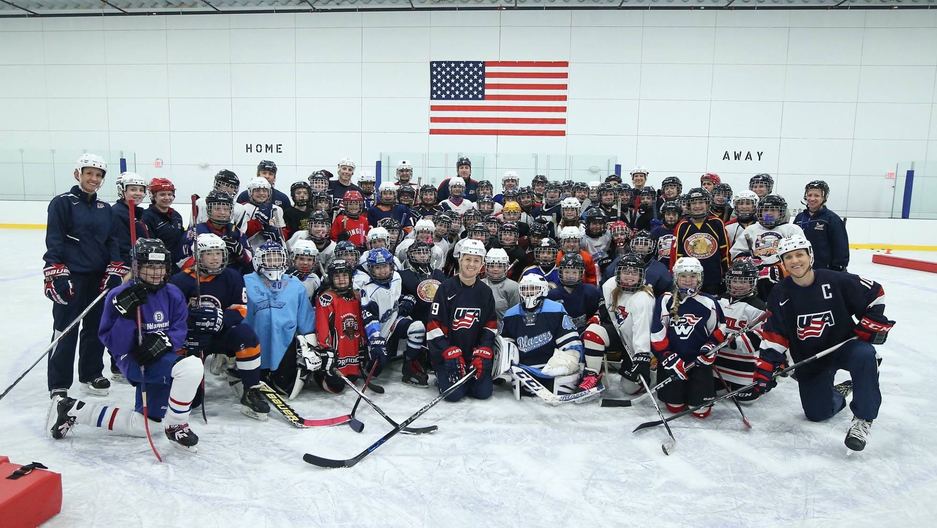 The US Women's National Hockey Team is shown here.

The US Women's National Hockey Team will return to defend their title in the world championships this year. Until Wednesday, the team had been locked in a 15-month contract dispute with the sport's national governing body, USA Hockey — over unfair pay and unequal treatment — and the women threatened to boycott a tournament earlier this month when talks stalled.

But the threat worked. Now, the women have a livable wage — reportedly about $70,000 a year, up from just $6,000 every four years (tied to the Olympics) — and parity with the men's team on travel stipends and accommodations. USA Hockey also agreed to improve their marketing efforts for the women's team and start providing support for elite girls' programs.

Jocelyne Lamoureux-Davidson is a forward on the national team. She’s already begun training for the world championships, which begin on Friday. Team USA's first game will be a rematch of the 2016 finals against Canada.

“To be able to train and skate the way we need to without it being a financial burden moving forward, I think is going to be very, very beneficial for our team,” says Lamoureux-Davidson. “It’s also going to change the landscape for the next generation coming up.”

The US Men’s National Hockey Team isn’t paid by USA Hockey because the male athletes are paid millions by the professional teams in the NHL. However, USA Hockey was providing the Men’s National Team with accommodations, meals and disability insurance, among other things.

“All of those things they were providing the men, we felt by the Ted Stevens Amatuer Sports Act, they’re obligated to provide that for us,” says Lamoureux-Davidson. “We were able to accomplish that in the agreement. We just feel like there’s also going to be a trickle-down effect, and it’s going to impact the younger generation. We’re going to have more publicity and more marketing, which is a piece to the puzzle. We’re very excited moving forward.”

Though the US Women’s National Team secured this victory, Lamoureux-Davidson says support from other female athletes at the college, recreational and high school levels played a crucial role. These groups stood in solidarity with the defending world champs and turned down offers from USA Hockey to be part of a replacement team.

“We were in contact with all the Division I and Division III coaches. Without all the support that we had this wouldn’t have been able to happen,” Lamoureux-Davidson says. “So many players turned down offers to play starting on Friday. Without everyone standing with us we probably wouldn’t be here today, so for that, we’re very grateful for. ... Understand, it’s not easy for a college kid or a high school kid to say no to; it’s a once in a lifetime opportunity.”

Lamoureux-Davidson says younger female hockey players were ready to stand up for the US Women’s National Team because those athletes could be impacted by USA Hockey’s decision in the future.

“Yesterday was a whirlwind, getting everything finalized, and now, I think we’re all just relieved that we can go to the rink, focus on what we love doing, and prepare to defend our world championship,” she adds.