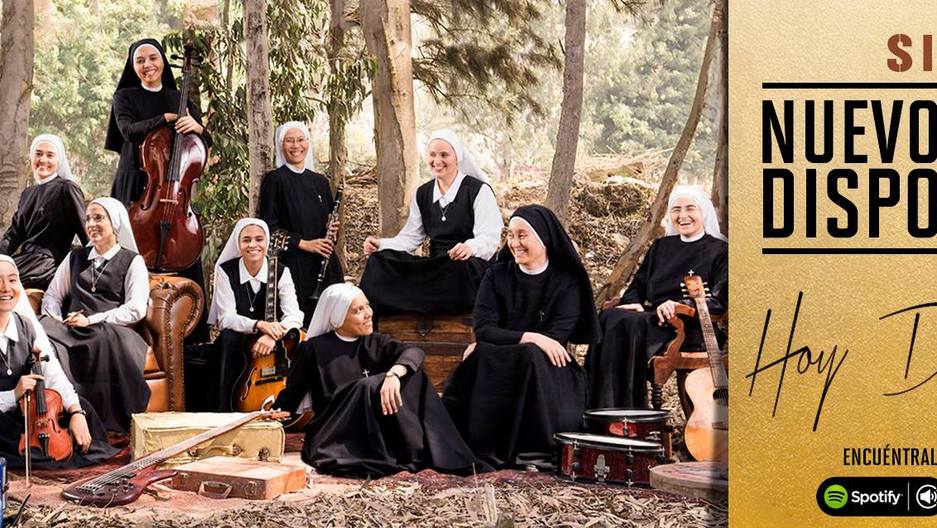 A few weeks ago, I received a message from our friend Tom Schnabel at KCRW's Rhythm Planet. He wanted to tell me about "a big musical group of Peruvian nuns who do rock music." Intrigued, I had Tom put me in touch with the band. And yeah, he wasn't kidding.

The group, Siervas — the name means "Servants," implying servants of God — is a big deal. They've played in front of 250,000 people. (OK, Pope Francis was the headliner, but still, that's a big audience!). And they play rock that would make any power band proud.

The sisters in this 11-member band hail from all over the globe, but their convent is in Peru. Their convent, by the way, was damaged in the floods that devastated the region last week. But these deadly floods haven't stopped them from making their US debut. The nuns traveled to the Chicago area this week for a series of concerts.

Sister Monica plays percussion and is a singer. "I'm very proud about my habit," she says. "And I'm very proud to sing rock music with a habit."

Sister Monica entered the convent when she was 25. She's always been a fan of music, including rock. And she says it's a misconception that a convent must be a quiet or silent environment. "Religious life is very lively," she says. "It's very fun. It's very musical. It's been just part of our life experience to express ourselves through music. ... We're showing the world what we live every day inside the convent."

Siervas is the real deal. Their playing is tight. Their album "Hoy Despierto" ("Today I Wake Up") is polished. They made a rock video. And the themes they convey in their lyrics are universal. Sister Monica says, "We have a message of hope. A message of faith. We have a message of loving each other."