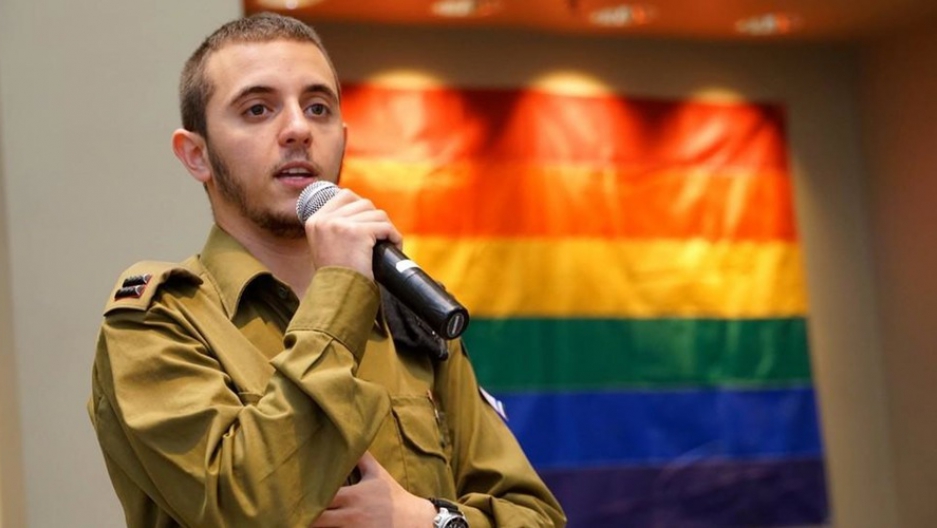 Lt. Shachar Erez, the first openly transgender officer in the Israel Defense Forces, speaking in Los Angeles at a local synagogue in June 2016.

Courtesy of the Israeli Ministry of Foreign Affairs

"I was so nervous. I don't remember anything from this talk."

That's how the first openly transgender officer in the Israel Defense Forces, Lt. Shahar Erez, recalls the time three years ago when he was training to be an officer and told his company he was trans.

"Back home I already identified as a male but enlisted as a female because I was afraid it would affect my service," he says.

"[But] in order for me to have an open and honest relationship with my soldiers," he remembers thinking as he prepared to serve as an officer, "I must be first open and honest with them."

So Erez stood up in front of the 70-plus soldiers he was commanding and told them his story — "not in order for them to better know me," he says, "but to be a better commander, to give them another tool to be the best officer they can be."

The IDF paid for all the costs related to Erez's sexual reassignment. Israel has universal health insurance.

"I did my upper surgery, my chest surgery, actually during my service," he says. "The IDF is my insurance and so it covered all my expenses for my hormones and surgeries."

"Taking testosterone is making me a better soldier, and stronger," Erez says, adding it's been exciting to be able to grow a beard.

Erez didn't notice any real change in how fellow service members treated him when he transitioned.

"They just treated me like any other soldier," he says.

Israel has mandatory military service for all citizens, male and female. Erez thinks that contributed to the response he received from fellow soldiers.

"Everybody joins the IDF," he says. "People are pretty used to meeting persons who are different from them. So everything was pretty normal."

It was different when people outside the IDF started hearing Erez's story. His first experience in the public eye wasn't a good one. He got a call from a friend who worked in the IDF's public affairs office. A reporter was interested in interviewing Erez about his personal story. Erez agreed to do it. But when the article appeared, he immediately regretted it. He found it misleading and full of errors.

"I was pretty embarrassed to read it," he says, "and I decided that I would never do any interviews again."

But a few weeks later he got another call from his friend. An Israeli teenager had contacted IDF public affairs because he was trans and wanted to talk to Erez about what he should expect when he did his military service.

From then on, Erez stepped up to help integrate transgender soldiers into the military. He started working with the IDF's gender affairs office on transgender issues.

("Yes, we have a gender affairs office!" Erez says.)

But it took longer for the IDF to accommodate transgender conscripts.

"You definitely see progress and the most important thing for me is to see that the IDF is actively, actively trying to better itself," Erez says. "This is the most wonderful part when I look at it."

When pressed about whether the IDF might be pushing his personal story as a way to deflect its own controversies — say regarding its treatment of Palestinians — Erez shakes his head.

"Personally, no. I don't feel like this," he says. "I think that one of our main goals in the gender affairs office is to spread the word. You know, for kids, who need to join the IDF, they need to know they have a place to go to — that they will get the right kind of treatment."

Erez often speaks to Israeli teens and is in the United States now to talk to American teens.

"I've been to a high school yesterday and after I finished talking," he says, "some kids came to me and actually one of them said she was considering going into the US military and hearing me gave her confidence. It was amazing. Worth everything I guess."