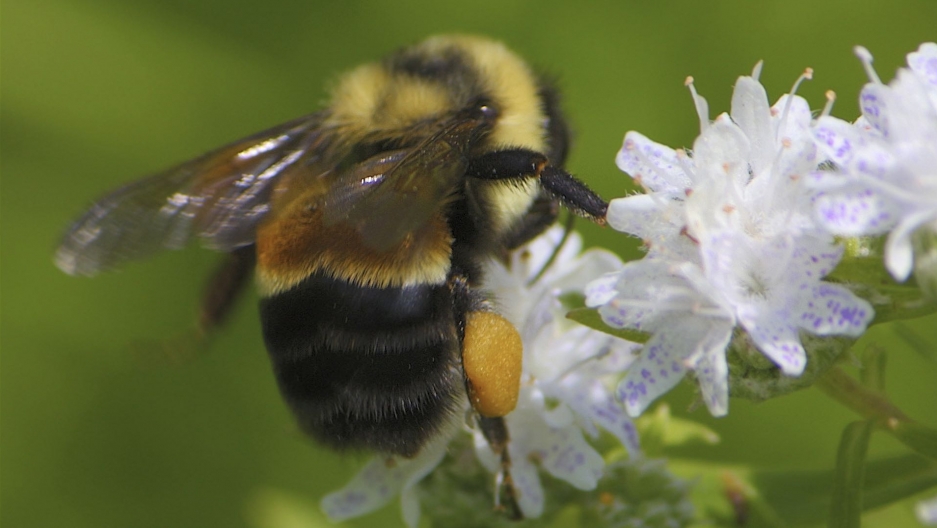 The rusty patched bumblee has been listed as an endangered species and the hope is that, that protects it.

#63. @realDonaldTrump, will you preserve the Endangered Species Act?

The Endangered Species Act became law in 1973, when the US Congress saw a need to protect certain types of threatened plants, wildlife and ecosystems because of their “esthetic, ecological, educational, recreational, and scientific value to our nation and its people.” The US Interior Department’s Fish and Wildlife Service and the Commerce Department’s National Marine Fisheries Service administer the ESA.

Though the ESA was signed into law by Republican President Richard M. Nixon, its future is uncertain under President Donald Trump.

Many Republicans believe the ESA overreaches and harms the drilling, logging and mining industries. Though about 1,600 plants and animals are currently listed as threatened or endangered, in February, the GOP-led Senate Environment and Public Works Committee held a hearing to discuss the possibility of changing the law.

Earlier this month, the Senate confirmed Ryan Zinke as the new secretary of the Interior. Zinke, who was previously a freshman congressman from Montana, has criticized the ESA in the past. Environmental advocates and groups have opposed Zinke’s nomination and confirmation, including Kierán Suckling, executive director of the Center for Biological Diversity.

“Ryan Zinke has a dismal 3 percent lifetime environmental voting record,” Suckling said in a statement. “His brief political career has been substantially devoted to attacking endangered species and the Endangered Species Act. He led efforts to strip federal protections for endangered wolves, lynx and sage grouse, voted to exempt massive agribusiness and water developers from Endangered Species Act limitations, and opposed efforts to crack down on the international black market ivory trade."

This week, the Department of the Interior listed the bombus affinis, also known as the rusty patched bumblebee, on the endangered species list. It's the first time ever that a bumblebee from the United States has made the list.

The rusty patched bumblebee used to be one of the most common bumblebees in America. Now, due in part to pathogens, its population has dropped more than 90 percent in the past two decades.

But the bee made the list after some delay by the Trump administration.

“On January 11, the U.S. Fish and Wildlife Service finalized the bumblebee’s listing as an endangered species,” National Geographic reports. “But on January 20, the bee got stung by the Trump administration’s efforts to postpone and review Obama-era regulations that hadn’t yet taken into effect. On February 10, the U.S. Fish and Wildlife Service announced that the bumblebee’s listing would take effect on March 21, more than a month after it was originally scheduled.”

In an interview with The Takeaway, Sam Droege, head of the Bee Inventory and Monitoring Lab and the United States Geological Survey, said he hopes that placing the rusty patched bumblebee on the endangered species list will help save the insect.

“[Placing the bee on the list] focuses people's attention on it,” he says. “It galvanizes resources. Right now, we know that the US Fish and Wildlife Service, who has primary responsibility for the bee in terms of its recovery, is focusing survey efforts to see if they can find any more of these populations, and they're also focusing research on some of the causal factors. It also has meant that state agencies and private groups like the Xerces Society and others are putting together programs to try and find the bee.”

As Trump’s presidency marches on, we’re wondering if he will work to preserve the Endangered Species Act to ensure that wildlife like the rusty patched bumblebee are protected. If you’d like an answer to that question too, click here to ask the president in a tweet.