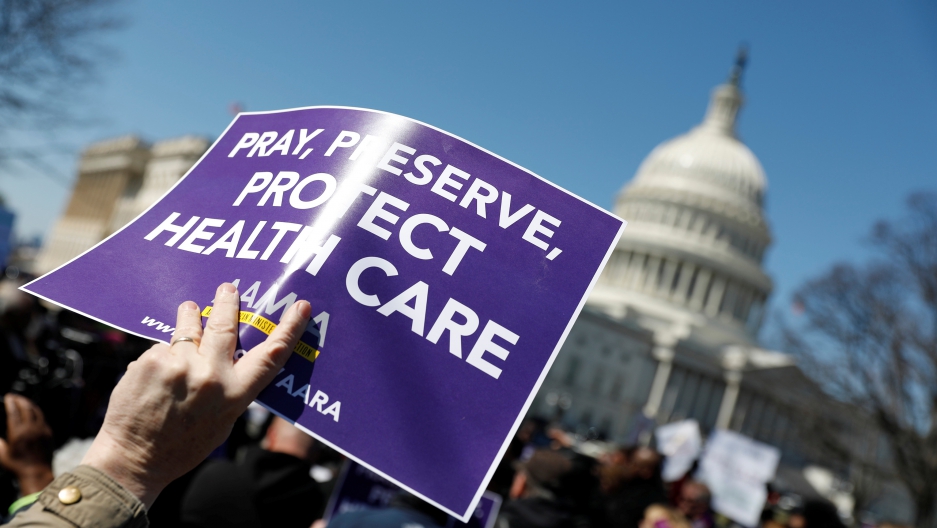 Demonstrators hold signs during a protest against the repeal of the Affordable Care Act outside the Capitol Building in Washington, U.S., March 22, 2017.

#61. @realDonaldTrump why would your healthcare plan make new mothers go back to work within 60 days, or lose insurance? #100Days100Qs

As part of an effort to appeal to more hard line conservatives, leaders of the Republican controlled House of Representatives revised their healthcare bill to require new moms who receive Medicaid to find work 60 days after they give birth. If they don’t, their medical coverage can be revoked.

The proposal has been controversial. An article in Slate magazine highlighted what they see as hypocrisy on the part of the Trump administration — particularly Ivanka Trump, who said she wants to be a bridge builder on issues of family and maternity leave.

Back when he was a candidate for president, Donald Trump said he would guarantee six weeks of paid family leave for working moms — the first time any Republican candidate had made such a promise. Trump, at the urging of his daughter Ivanka, included a $300 billion plan for tax credits and maternity leave in his campaign platform. He's expected to push it as part of his tax reform efforts.

There are numerous studies demonstrating the benefits to moms and babies when moms are able to stay home — including quicker physical recovery and better success with breastfeeding.

So, Mr. President, if you want to prioritize families and expand people’s access to maternity leave, why does this health care plan make new moms go back to work so quickly, or risk losing their insurance?