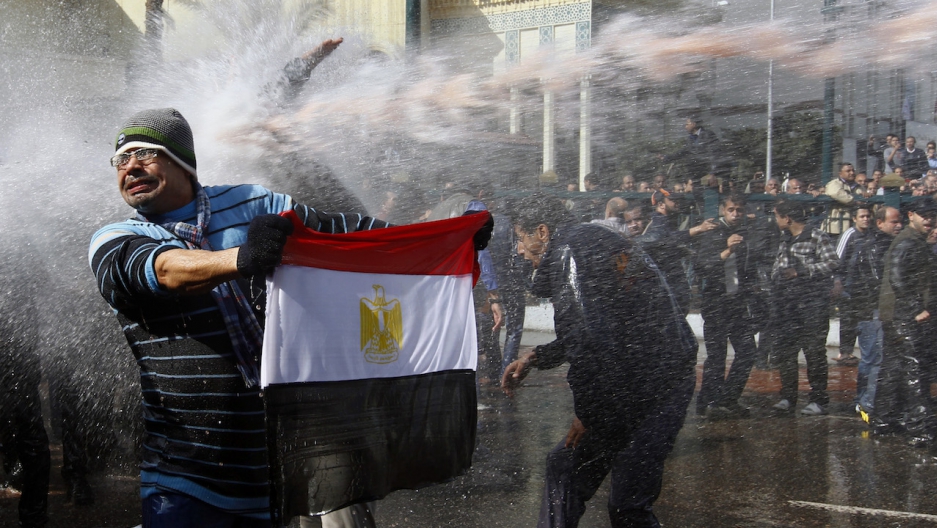 A protester holds an Egyptian flag as he stands in front of water canons during Arab Spring clashes in Cairo on Jan. 28, 2011.

In six years, Egypt's Hosni Mubarak has gone from symbolizing the hubris of Middle East dictators swept away by the Arab Spring uprisings to an emblem of dashed hopes.

The strongman who ruled for 30 years had warned that if it were not for him chaos would grip Egypt.

To the dismay of protesters who put their faith in the revolution, Mubarak left a military hospital on Friday where he had been detained since his 2011 ouster to a country where many now remember his stable rule with nostalgia.

Mubarak had remained defiant since his ouster, sneering at the movement that in a mere 18 days in January and February 2011 shook the foundations of the venal police state he sculpted over three decades.

Months after he was forced from power, Mubarak was placed on trial for his role in trying to quash the protests that led to his overthrow, and in which some 900 people were killed.

Wheeled in to court on a gurney, wearing his trademark sunglasses and looking disgusted, Mubarak denied the charges. He was later sentenced to life in prison.

"When I heard the first verdict I laughed. I said: 'Ha!'," he told a private broadcaster after the sentencing.

"I did nothing wrong at all," he said.

Apparently referring to economic growth, he said: "The last 10 years showed more results than the 20 years before, including telephones and so on, and then they turned against us."

At a retrial, the court decided to drop the main charges against Mubarak on a technicality.

He beat other cases too, but was sentenced to three years for corruption, which took into account time served.

This month, after a final acquittal in the protester killing case, the prosecution said he was free to go.

A few protesters who supported the strongman would show up at his trials. Their slogan: "We are sorry president." Many laughed at them.

But over the years the sentiment grew as Egypt tottered from one disaster to another while Islamists who came to power contested its levers with the military and police.

The Islamists Mubarak had warned about, in the form of his successor Mohamed Morsi, greatly divided the country.

Millions took to the streets in June 2013 demanding the Muslim Brotherhood politician's resignation just a year after his election, prompting the army to oust and detain him.

Many Egyptians began to yearn for the banality of Mubarak's era, while activists who spearheaded his ouster found themselves in jail.

Mubarak was the fourth president of the Arab Republic of Egypt, founded in 1952 when the military overthrew the monarchy.

He was neither an inspirational revolutionary like Gamal Abdel Nasser, nor a charismatic and daring politician like Anwar Sadat, whom he served as vice president before Sadat's assassination in 1981 by jihadists.

Born on May 4, 1928 in the Nile Delta village of Menufiyah, Mubarak rose through the ranks of the air force before becoming vice president.

A bland politician, he inspired little veneration, instead earning the moniker "The Laughing Cow" after the mascot of a processed cheese brand.

As his reign stretched on, he became known to the opposition as "The Pharaoh."

'Let them have fun'

But he did prove to be an adept politician, picking up where Sadat had left off.

He maintained a peace treaty with Israel — the reason Sadat was assassinated — and became a main player in the US-sponsored Israeli-Palestinian peace process more than a decade later.

Even as Egypt's population boomed during the Mubarak era, the Arab world's most populous country — also its one-time intellectual and cultural core — faded as a regional power.

Both governance and the economy were greased by patronage and corruption. Mediocrity, half measures and rights abuses were the hallmarks of his rule.

During the 2000s, change came to Egypt. Slowly, under the direction of his unpopular son Gamal, the government began a program of economic liberalisation.

At the same time, and largely in response to US pressure, Mubarak began to ease his grasp of political life.

"Let them have fun," he said of his opposition.