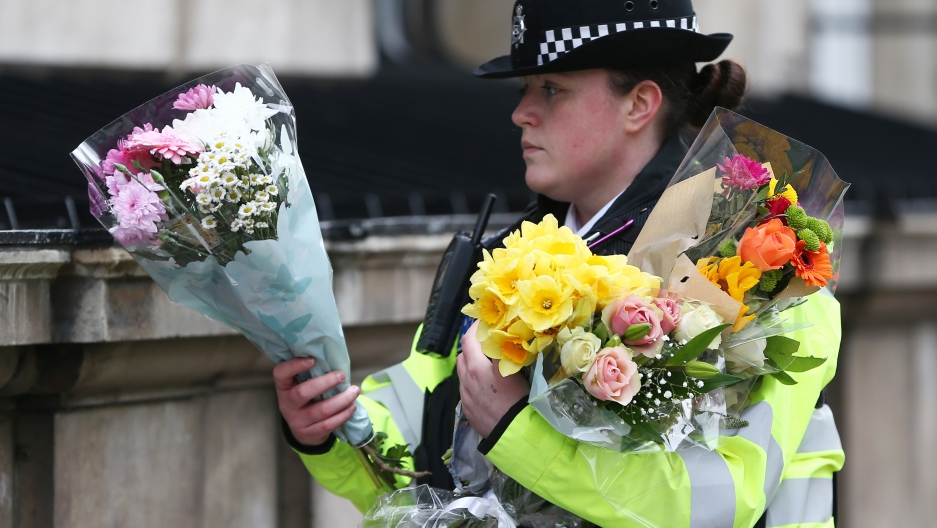 A police officer carries bouquets of flowers on Whitehall the morning after an attack in London, March 23, 2017.

The investigation into what exactly happened in London on Wednesday is really only just beginning. But the initial impression is that it was a "lone wolf" attack by an ISIS supporter, like we saw in Orlando, Nice and Berlin.

We've become accustomed to hearing the phrase "self-radicalized" in connection with these lone wolves. But is that really the case? Are they alone, radicalizing themselves?

It turns out that most lone wolves are actually groomed and mentored, one-on-one, by individual ISIS operatives.

“In most of the cases, when it comes to attacks like the ones that have occurred in the United States that have been claimed by the group, and other attacks in the West [in] various countries in Europe, you find that those individuals have been corresponding with group members located inside the so-called caliphate," says Michael S. Smith II, a terrorism analyst who specializes in the influence operations of groups like al-Qaeda and ISIS.

“The Islamic State has rigorously been involved in the development of online communities,” Smith says. “They use things like Twitter to identify would-be supporters for the group, and then they begin to use other technologies — encrypted chat apps like Telegram Messenger — to more actively engage with those people to try to build support in such a way that manifests in the resort to violence that we see in events such as the events that unfolded in London.”

Many potential attackers seem to need this kind of one-on-one attention, human-to-human, to push them over the line from sympathizing with radical causes to taking potentially suicidal action.

But Smith says it’s very difficult to prevent or break that connection. He would like to see social media companies do more “to increase the risks associated with the exploitations of their technologies.”

The group is waging what Smith calls “the most aggressive and effective recruitment and incitement program of any terrorist group in history.”

ISIS groomers are usually based in Iraq or Syria, especially in the Syrian city of Raqqa, an ISIS stronghold. Those are places most lone wolves will never visit.

As The New York Times correspondent Rukmini Callimachi explains, the majority of attacks done in ISIS's name outside Iraq and Syria are carried out by people who were radicalized in their home countries and never traveled to ISIS-controlled territories.

The London attack could turn out to fit that pattern, Callimachi says. ISIS released a claim of responsibility on the platform, Telegram, for the car-ramming and stabbing. The statement referred to the assailant as "a soldier of the Islamic State," a term ISIS uses for frontline fighters in Iraq and Syria and for anyone who carries out an attack in its name.

If the episode is indeed the work of an ISIS recruit, it's the extremists' first successful assault in the UK.

"This is a mode of attack that is propagated by ISIS. It's not something that they necessarily directed. We don't know yet, we don't have enough detail about this, but I believe the inspired attacks are still very much part of the ISIS strategy," Callimachi says. "For years now, the Islamic State has been working to put in place a propaganda machine that essentially inspires people to carry out attacks on their own and gives them the tools to do so."