Students at the Kajo Keji Health Training Institute were taking exams when the gunshots rang out. They panicked, and in a flash dozens of trainees poured out of their classrooms, running for their lives and scattering in multiple directions away from the unknown gunmen dressed in mismatched uniforms. By the time the guns fell silent, two students lay dead in the yard. The attackers had disappeared.

The institute was just three years old, born out of a dream to improve the health and lives of residents of South Sudan. But after gunmen opened fire that morning last September, the school seemed likely to become a casualty of a three-year civil war that has killed tens of thousands of people and sent more than 3 million fleeing from their homes. Now, like hundreds of thousands of South Sudanese, the Kajo Keji Health Training Institute is rebuilding across the border in Uganda and waiting for peace to return to South Sudan.

The dream was Lou Louis Koboji’s. He fled Sudan in 1987 during a civil war that would last more than two decades and leave about two million dead. When independence came to South Sudan in 2011, Louis was working as a regional medical lab technologist in northwest Uganda. The next year, he visited South Sudan as a consultant and witnessed firsthand the crippling health problems that continued to plague his homeland.

Rates of maternal deaths in the world’s youngest country were among the highest on the planet — more than 50 times higher than in the United States. Most South Sudanese children didn’t receive vaccinations for basic ailments like the measles and whooping cough. Medical workers weren’t paid consistently, so clinicians were scarce. People died from treatable conditions simply because they couldn't see a doctor.

Louis decided he had to return home to help.

“Now that there is relative peace, we want to come back and rebuild the nation,” he remembers telling his supervisor in Uganda. “We want to go and improve the healthcare in South Sudan.”

In September 2013, Louis, who is now 35, founded the Kajo Keji Health Training Institute with a class of 65 students. It would offer a three-year program to train aspiring physician assistants, lab technologists, nurses and midwives, to populate the country’s health clinics and build a health care backbone for the new country.

“If I cannot participate in building the nation, then who else can do that?" — Lou Louis Koboji

Three months after the institute opened its doors, tensions between President Salva Kiir and former Vice President Riek Machar exploded in December 2013. After failed attempts to halt the bloodshed, violence spread around the southern town of Kajo Keji last summer. The country has fractured along ethnic lines between supporters of Kiir, a Dinka, and Machar, of the Nuer group, leaving a trail of horrors as rival gunmen rape, murder and pillage their way across the country. The United Nations has warned of ethnic cleansing verging on genocide. Continued fighting has ravaged the local economy and made it difficult to farm. In February, a famine was declared in some parts of the country and UN officials have claimed that nearly 5 million people are in urgent need of food and other assistance. 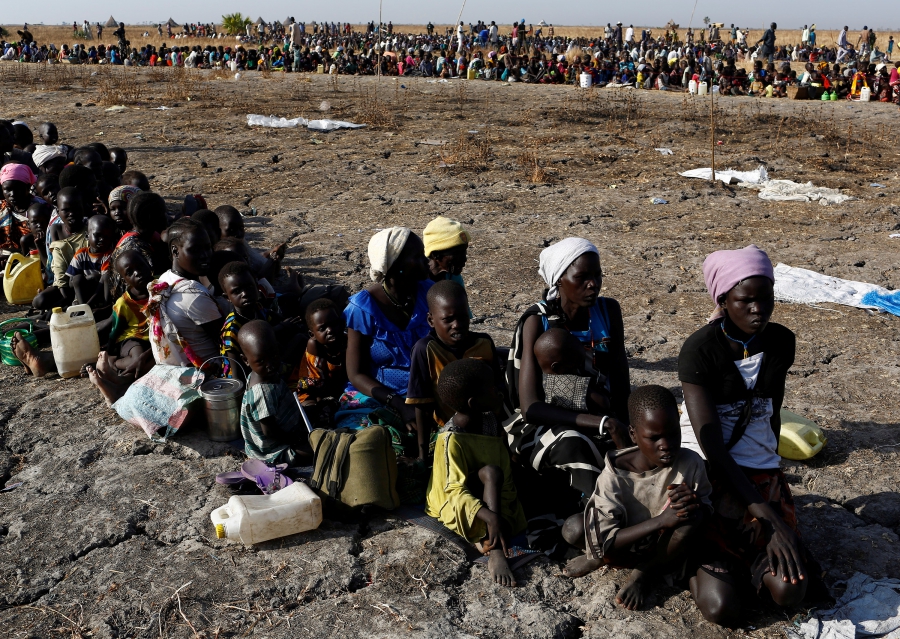 Women and children wait to be registered for food distribution by the UN World Food Program in Thonyor, South Sudan, Feb. 26, 2017.

On the morning of Sept. 21, the war burst onto the compound of the Kajo Keji Health Training Institute.

“We were doing our first paper of our exam,” said Santino Dut, 24, a second-year student at the institute. “We just saw different people in the compound, they were having different military uniforms and the guns. So after some minutes they start firing bullets into the air. We all came out from the class and we ran to different directions.”

“Students like us, we ran and just we left the compound,” he said. “When we came back we found no one.”

Two students were killed. It's unclear whether they or anyone else at the school had been targeted, or if the gunmen were simply thieves there to loot the campus. When students returned, many students’ belongings had been stolen, including items from the boarding house where they stayed.

“They have taken their bags, mattresses — everything. They just left students like that,” said Lucy Sunday, 21, another student.

Lou Louis Koboji, the founder and director of the Kajo Keji Health Training Institute, stands outside the school’s new location in Arua, Uganda.

Still, no one knows who the gunmen were. They may never know.

The school closed temporarily. But Louis refused to concede defeat.

In January, the Kajo Keji Heath Training Institute reopened its doors, 100 miles to the southwest in the Ugandan town of Arua. In crossing the border, the school’s 130 students joined a stream of more than 800,000 South Sudanese refugees living in Uganda to escape the war at home. The region around Arua is now full of refugee settlements that have been constructed in a matter of months, turning what were once desolate stretches of bush into sprawling villages of migrants.

“Actually there is nobody left in Kajo Keji. Because of that, now we cannot do anything,” said Edward Mika, 48, who teaches a public health class at the institute. Mika’s family lives in a nearby refugee settlement.

Just a few months ago, Mika was a county health director in South Sudan. But many towns now feel abandoned and medical workers have disappeared.

The new Uganda compound of the Kajo Keji Health Training Institute is roughly one-quarter the size of the previous location in South Sudan.

In Uganda, the institute occupies a large plot of land ringed by a brick wall along a busy road populated with aid groups, international organizations and hotels catering to traveling humanitarian workers. In the yard stand three white tents currently being used as classrooms, which can get maddeningly hot in the equatorial sun. During beaks, students mill about in the shade of a few large trees.

As before, students dream of suturing up their broken nation. The only difference is they're doing it from another country.

“There are really no health personnel in South Sudan,” said John Remo, a 19-year-old student from the town of Yei. “That’s the reason I come here to read so I also go back and help my people.”

Being a refugee isn't a new phenomenon for many from South Sudan, which suffered years of war before gaining its independence in 2011. Many South Sudanese from the border region with Uganda have stories of crossing between the two countries to seek safety whenever the squabbling of politicians upended their otherwise quiet lives.

Refugees from South Sudan at a reception center in Kuluba, in northwest Uganda, wait to be registered and delivered to a settlement where they may live for years.

The dozens of students at the medical institute in Uganda say that they feel safe now, but unsettled.

Students worry about the cost of the training. Explosive inflation in the South Sudanese currency, the pound, has wiped out many families' savings and made the roughly $1,000 annual cost of the institute prohibitively expensive for some students. Any income their relatives may have been generating has likely disappeared as people are forced to abandon their farms and businesses in South Sudan. Multiple students fear that they won't be able to make the next semester’s bill and are desperate for scholarships. The school also needs money to cover its operations. It’s now on a fundraising mission, with a goal of raising $250,000 by next year.

And of course there’s the situation back home. Students still have families scattered across South Sudan who may be vulnerable to attacks or have trouble finding food at the local market. Others have families struggling to start a new life in one of the several refugee settlements across northern Uganda that continue to grow by the day. The Ugandan government has welcomed refugees with open arms, but it has also struggled at times to accommodate the thousands of people arriving daily. Giving refugees opportunities for education, work and to build a future has occasionally lagged behind the imperative to make sure they are safe, fed and healthy.

Classes at the Kajo Keji Health Training Institute are taught in white tents that can become stifling in the afternoon sun.

The institute will stay in Uganda for now, Louis promises, at least until South Sudan becomes safe once again. If the situation doesn’t change in the next three years, he and the other stakeholders at the school will reconsider their options.

Most students, for their part, are intent on going back to South Sudan once they receive their degrees.

“That’s the aim, because home is home,” said Emmanuel Lemi, a 21-year-old in his first year of study. “The aim is to save lives.”

Despite the challenges, Louis remains undeterred from his mission of helping to build up a South Sudanese medical corps. One way or another, he said, his students will go back to shape their home country.

“Nation-building is always a challenge,” he said. “If I cannot participate in building the nation, then who else can do that? These students have got a future and they have dreams of also becoming medical personnel. ... We don’t want to spoil their dreams. We need to give them the opportunity to really do that and finish.”