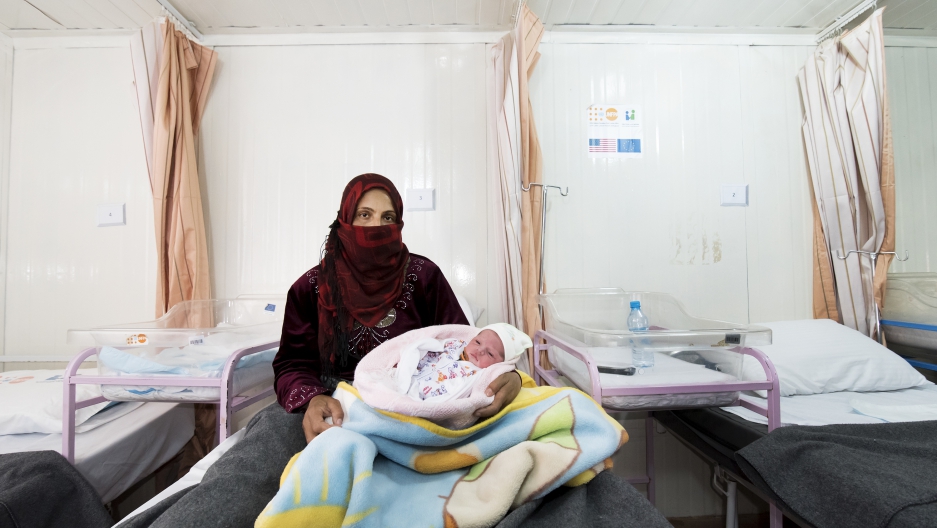 Um Mohammed and her newborn daughter, Shafagh, are pictured at the maternity clinic in Zaatari refugee camp. The clinic is run by the Jordan Health Aid Society and United Nations Population Fund.

Baby Shafagh was born seven hours ago. In a refugee camp. Eight miles south of the Syrian-Jordanian border.

She's wrapped in a pink blanket. A white beanie covers her head.

In some ways, Shafagh is lucky. She came into this world in a maternity clinic, not a tent, and in a place where bombs are not falling overhead.

Um Mohammed, Shafagh's mother, who asked that her last name not be used, for safety reasons, is already up and talking. She soothes her newborn and thanks God for a healthy baby and comfortable delivery. Shafagh is Um Mohammed’s ninth child. She has five boys and four girls.

Rima Diab, a gynecologist at the maternity clinic in Zaatari refugee camp, delivered Um Mohammed’s baby. She is back to check on her. They start off talking about Shafagh, and then the conversation quickly turns to Um Mohammed's other children. One of Um Mohammed's daughters, a 17-year-old, is also expecting. "She'll deliver her baby any day now," she tells Dr. Diab in Arabic.

Diab is so taken aback that she suddenly starts speaking a mix of English and Arabic. Um Mohammed looks confused.

A midwife checks on baby Shafagh at the maternity clinic in Zaatari refugee camp. Shafagh was born seven hours before the photo was taken.

Teenage pregnancy is common in Zaatari. In 2014, the NGO Save the Children reported that one-quarter of all the Syrian refugee marriages registered in Jordan involve a girl under the age of 18. A more recent study by the United Nations found that this is also true in the Syrian refugee community in Lebanon.

"One reason for this," Diab explains, "is that many of the refugees in this camp come from the rural areas in Syria and teen marriage was a common practice back home. It continues here." Then, she adds, there are the families who do this out of a need. Money is tight and marrying off a daughter means one less mouth to feed.

Adding to that is the security issue. Although safety in the camp has improved a lot compared to its early days, women still fear sexual assault.

In its report, “Too Young to Wed,” Save the Children said “extreme poverty and increasing fears of sexual violence among Syrian refugee communities mean that some parents feel they have no choice but to marry their daughters to keep them 'protected.'" 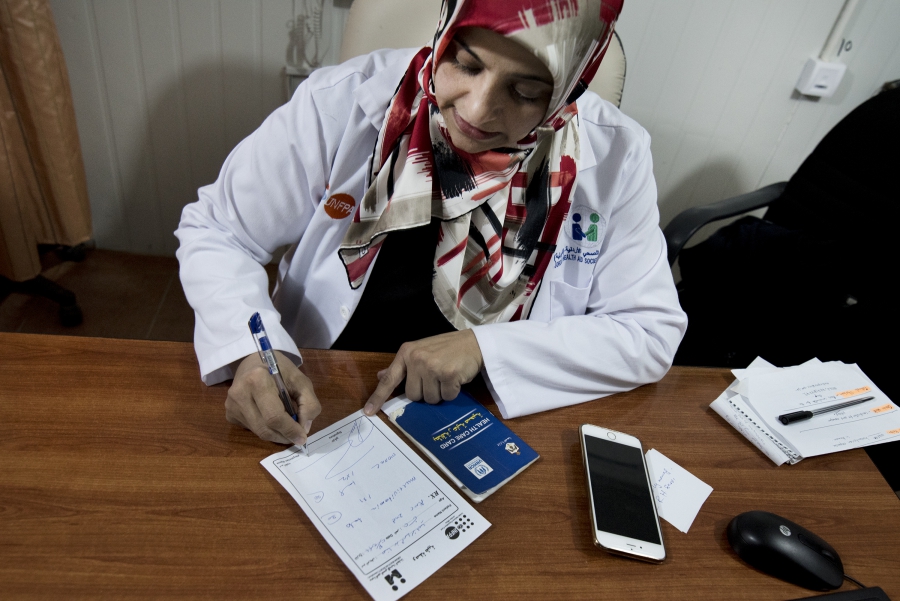 Over at the camp's Mother-Child Center, a group of women waits for their checkups with the physician. Among them is 16-year-old Walaa, who also requested that her last name not be disclosed. She's wearing a long, red coat and shiny, silver shoes. Walaa found out she was pregnant two months ago. She's been married for eight months. "I was at my cousin's wedding, and his mother saw me," she says of how she met her husband, "and then we met each other, and that's how it happened."

Walaa left Syria three years ago. She came to Jordan with her sister and sick mother. Back home in Daraa, she went to school. But when she got to Zaatari, she stopped. She had to take care of her mother. Her cousin is with her at the clinic today.

"This is my first child," Walaa says with a giggle. "Everything is new to me. From now on, everything is going to be different." 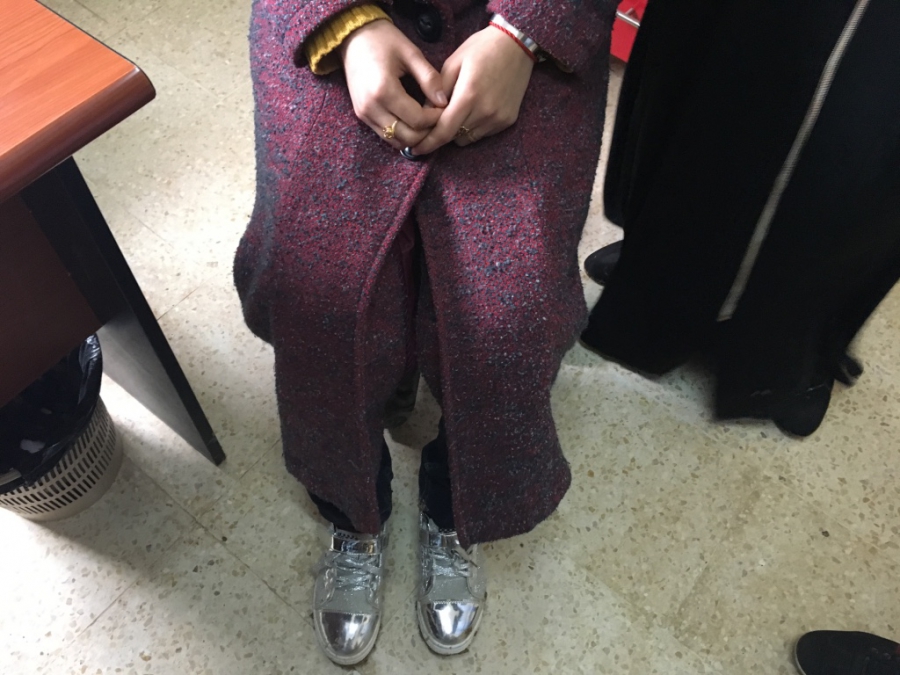 Walaa, 16, got married eight months ago and is expecting her first child. She asked not to be identified here, for safety reasons.

I ask Walaa, given that her child will be born in Jordan, what she will tell him or her about Syria.

"I’ll tell him Jordan is our home now," she responds, "but I’ll also tell him about Syria, about the good days. Not the bombings and the war."

Read more: What do refugee parents tell their children about Syria? (PHOTOS) 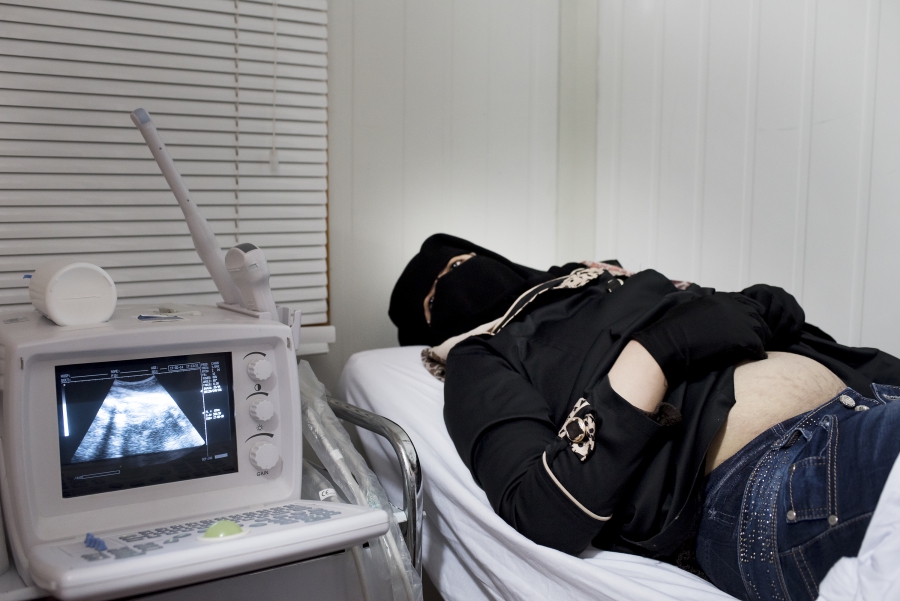 Hannan, 20, who asked that she be identified by her first name only, undergoes an ultrasound at Dr. Diab’s clinic. Hannan is expecting her first baby. Dr. Diab reveals to her that she is carrying a healthy baby boy.

This maternity clinic in Zaatari only deals with vaginal births. C-sections or complicated cases are referred to another hospital in the camp, run by the Jordan Health Aid Society and United Nations Population Fund. Most of the medical staff, like Diab, are Jordanians. Diab has been here for five years. “I was working in hospitals with the Ministry of Health,” she says, “then I left this hospital, and I came here to help the people here.”

I ask her whether the clinic provides the refugees with contraceptives. Yes, she says. In fact, Diab and her colleagues have been running workshops about family planning.

"At first, we realized there’s little awareness about family planning among the refugees," she explains. "Now, we provide a range of methods, including injectable contraceptive, pills, condoms or IUDs."

The hardest thing, Diab says, was to convince the men that contraception is worth using. They were skeptical. Will these methods make their wives infertile, they wondered? Are contraceptives even allowed in Islam?

The workshops and outreach did have an impact. "We used to have three to five IUD implants per month," the doctor says, adding, "Now we have about 80."

But surprisingly, the birth rate in the camp didn't drop. Diab thinks that Syrians in the camp still prefer larger families.

Then she gives this explanation: About half a million Syrians have died since the start of the war. There’s a sense of loss among Syrians. Some feel it’s their duty to compensate for the deaths. 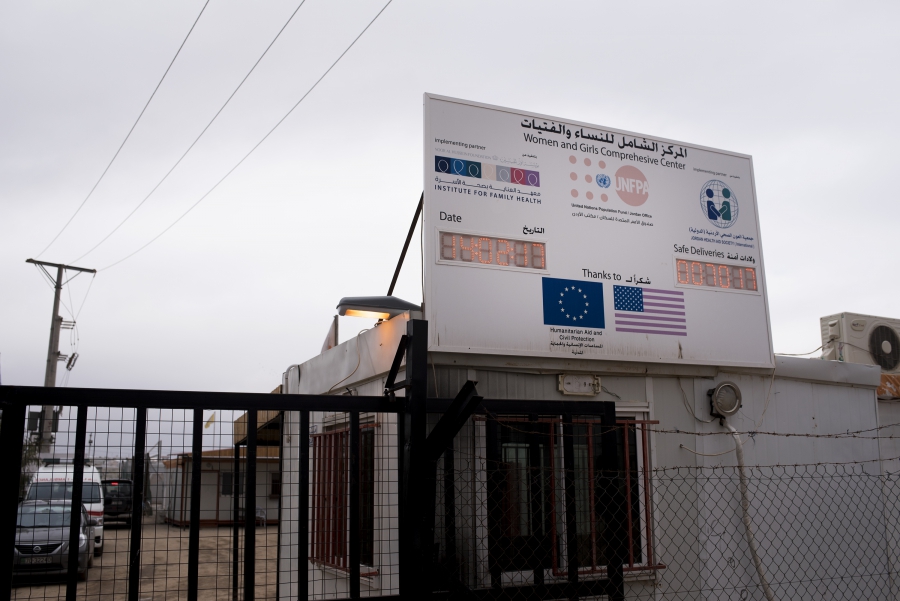 A sign shows the number of safe deliveries outside the maternity clinic in Zaatari refugee camp. At the time of the picture dating to Feb. 14, 2017, there were 7,017 safe deliveries at the clinic.

Before mothers are discharged from the clinic, they’re given a "baby care package." Um Mohammed, the mother who gave birth this morning, watches as the midwives open hers to show her what’s inside. There’s a bar of soap, shampoo, diapers and a onesie with pictures of teddy bears.

Um Mohammed and her baby girl will head home in a couple of hours. In this refugee camp, home is a trailer. And just like that, baby Shafagh will start her life as a new, tiny addition to the almost 5 million displaced Syrians.