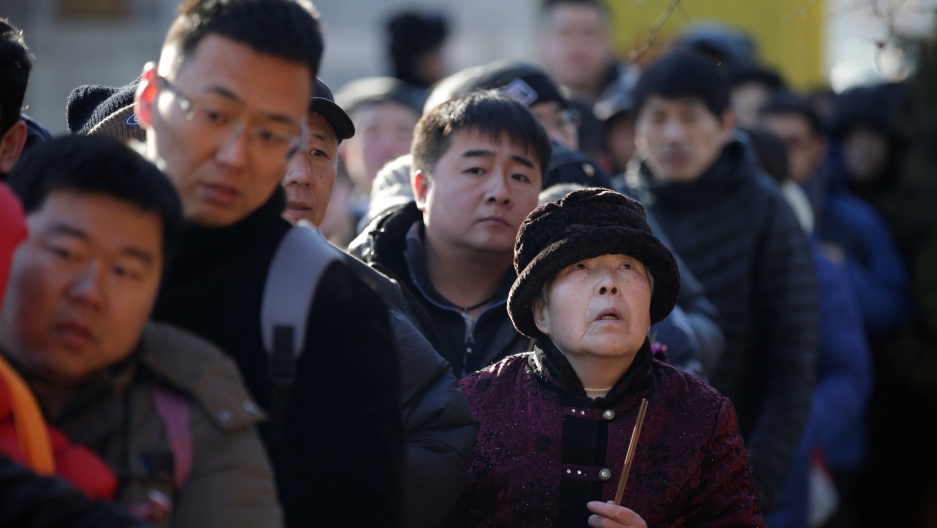 Chinese gather near Baiyun Temple in Beijing to pray for good fortune on the fifth day of the Lunar New Year.

As a second-generation Chinese American author, Gish Jen is well aware of the dangers of stereotyping.

That doesn't stop her from unpacking the controversial notion that a deep culture divide separates East and West when it comes to how we view the self and identity.

Her new book, "The Girl At the Baggage Claim: Explaining the East-West Culture Gap," is a deep dive into the debate.

The girl in the title is an actual young woman. She lives in Asia and received a sought-after slot at Milton Academy, a prestigious private high school outside of Boston. The student presented excellent exam and essay-writing scores, and performed well on her Skype interview.

But the moment admissions personnel greeted her at the airport, they realized something was amiss.

As the semester went on, it slowly came out that the girl who had arrived was not the girl who was on the Skype interview," Jen says. "It was her sister."

Jen offers the example because of the sort of scam it entailed.

The type of fraud was not shocking to me. The idea of substituting one person for another I realized was very Asian and very common," she says. "There's an 'Asian self' that it not much understood by the West ... the idea of substitution is not strange."

In fact, Jen argues, in her experience, impersonating others for exam purposes is not uncommon in Eastern cultures and not taboo. She offers the example of the story of a tutor she worked with in Shanghai several months ago. The young woman had assisted her friend by pretending to be her for a school physical fitness exam.

"She did this so successfully her friend was then recruited for track and field," Jen says. "It's seen as a bad thing — wink, wink — but it's something like speeding. In you go 75 mph in a 60 mph speed zone that's a bad thing and you do get your ticket, but it's not the end of the world."

Jen says in the West, an individual's uniqueness is sacred, and the culture mandates that people define themselves by their differences.

In China, she argues, that uniqueness is acknowledged, but individuals are "much more oriented toward their group, their religion, something outside themselves. It's not that they're not different. Of course if you looked at their DNA they're different. But if you asked them, 'Where does real truth lie? Where is truth capital 'T'? The truth that you must really heed, that is not inside, but outside."

In the East, Jen says, a family sees itself as sort of a relay team.

"The same way you might sub in another runner if somebody was injured, they have a much more interchangeable view of themselves than we have in the West," she says.

Jen seems to see these clashing views on display wherever she turns. She even finds them in news reports, for instance in the recent viral video of Professor Robert Kelly, who was interrupted during a BBC interview while speaking from his home south of Seoul, South Korea.

Jen says in the West, that's a side of the interviewee we don't want to see because it would diminish the professor's authority.

"The person that we really want to hear from in the West is completely free of all those attachments," she notes.

"Actually there is no such person. That is our fantasy."