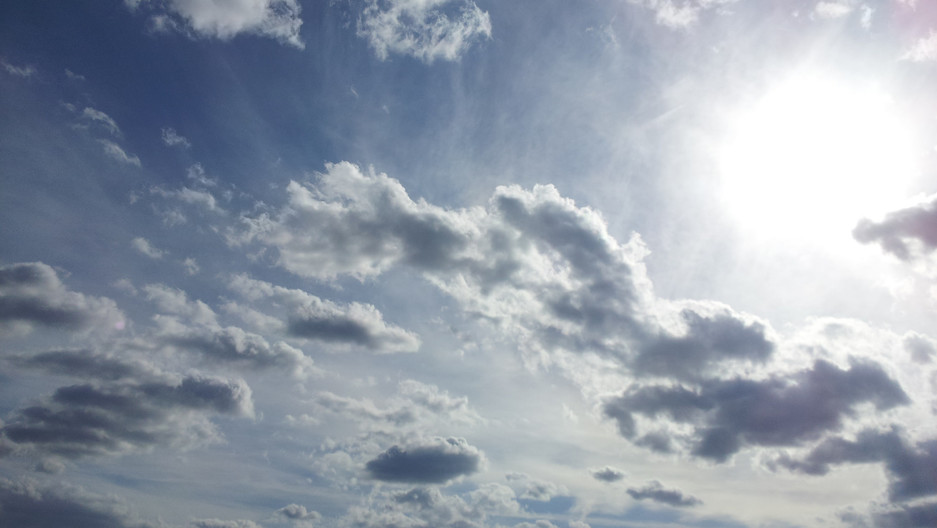 What kind of bacteria are up there?

Ever since Antoni van Leeuwenhoek first observed “animalcules” through a microscope in the late 1600s, we’ve been finding bacteria all over. They’ve been discovered in deep sea vents, on human skin, and deep in Antarctic ice. There are even bacteria all the way up in the clouds. Strange and wonderful, no?

A recent study published in Nature Communications describes how Earthly bacteria can even catch rides on raindrops. When the raindrops burst, the bacteria are sent into the air — and under the right conditions, catch the wind.

But it doesn’t even take raindrops to send bacteria into the air, says Cindy Morris, research director at the French National Institute for Agricultural Research. “Bacteria are very, very light and so almost any air movement can lift them up.”

Once in the air, she says, bacteria can catch upward currents, driven by the heat of the soil. “Most of the bacteria that are going upward are coming either from soil surfaces or mostly plant surfaces,” she adds. “So these bacteria lift off, sort of like dandruff, and float up into the atmosphere, and they can go all the way to the stratosphere.”

In fact, there’s an entire microbiome in the sky. Athanasios Nenes, an atmospheric chemist at Georgia Tech, has collected bacteria samples from the troposphere, 5 to 9 miles above us. (Neither Morris nor Nenes were involved in the Nature Communications study.)

“We collected DNA from these bacteria and we sequenced them and we identified somewhere around 100 classes of bacteria types,” he says. He explaines that the bacteria — sampled from air masses before, during and after two tropical hurricanes — were a mix of oceanic and terrestrial microbes.

What’s more, Nenes and his team found that 17 of the bacterial taxa they identified were present in all of the samples, indicating that they can survive in the harsh conditions of the troposphere. According to Nenes, scientists still aren’t sure how the bacteria manage it.

Morris’ research has shown that bacteria may do more than withstand atmospheric conditions — they can actually influence the weather. She’s studied how proteins in some airborne bacteria can increase the freezing temperature of water, catalyzing precipitation from the clouds. In the process, known as ice nucleation, bacteria become nuclei for raindrops or ice particles.

“So in order to start the process that would get cloud droplets to aggregate and become heavy enough to fall, you generally need freezing,” Morris explains. “In the temperate regions you need a freezing process, where an ice crystal then will collide with droplets that are also cold but they haven't frozen yet. And this is how the heavy droplets can form.”

Scientists think that ice-nucleating microbes might also play a role in the formation of lightning, which is produced through the collision of ice and water particles. “We have colleagues in Brazil, atmosphere physicists, who actually injected into a model particles that had the properties of bacterial ice nuclei. And they generated more lightning with them than without them,” Morris says.

But she points out that for bacteria stuck floating in the atmosphere, there’s another benefit to ice nucleation. “We think it just basically helps the bacteria fall out of the clouds,” she says.

“The conditions up there are harsh, and if the bacteria remain too long in the clouds, they probably eventually will die. So this is a sure down elevator. The elevator is going down for them, and they need to get on it, because otherwise they won't fall on their own.”

Meanwhile, Nenes is learning more about the proverbial “up elevators” for bacteria, into the atmosphere. He’s been flying over Crete, looking for patterns in the types of bacteria blowing in from the desert, for example, or in gusts from the European continent.

“Each air mass has [its] own characteristic biological particles,” he says. “And so if you sit around there for long enough, you can actually get a very good idea of who is going to be there, which concentrations, which time of the year.”

“And then once you have a good idea of their properties — you know, how easily they make ice, what are the conditions they need, how much they can withstand the atmospheric stressors. You can get a much better idea of what’s the role of bacteria in cloud formation and precipitation.”